The first students of the College of New Jersey (as Princeton was known from 1746-1896) used books from the personal collections of College Presidents Jonathan Dickinson and Aaron Burr, Sr. In 1750, a gift from Governor Belcher of 474 books made the library the sixth largest in the colonies. The library's first home was a second-floor room in Nassau Hall, which it shared for a time with the Continental Congress. The library withstood the ravages of the Revolutionary War only to be destroyed in 1802 when a fire gutted Nassau Hall. Generous donors helped rebuild the library's collections. However, soon after President James McCosh came to Princeton in 1868, he reported to the trustees that he found the library "insufficiently supplied with books and open only once a week... for one hour."

A Model of Future Library Space 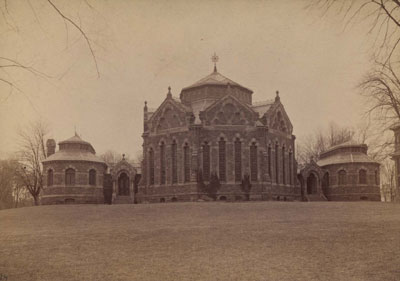 Modern library philosophy had its start at Princeton when President McCosh arranged to have the library open every day but Sunday, hired Princeton's first full-time professional librarian -- Frederick Vinton, formerly of the Library of Congress -- and obtained a new building designed solely for library purposes. The plans for the new Chancellor Green Library made such an impression on the trustees that Philosophical Hall (made famous by Joseph Henry's discoveries there) was razed so the library could be placed next to Nassau Hall. The library opened in 1875 and was considered by many to be a model of future library space -- an octagonal building in which from the center of the room, on a raised platform, Librarian Frederick Vinton wrote the card catalog by hand and kept a watchful vigil over the patrons. 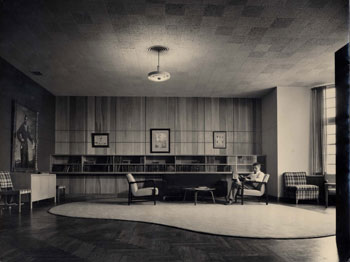 The Opening of Firestone Library

By 1897, the library was filled to capacity and Pyne Library was added to Chancellor Green. It took 50 years for the collections to reach 1.2 million volumes and for them to outgrow these two buildings. In 1948, the Harvey S. Firestone Memorial Library opened its doors. It was the first large university library to be built after World War II. The open-stack library was designed as a working laboratory for the humanities and social sciences, giving students free access to materials and comfortable places in which to read.

In 1971, the need for additional space for both books and readers led to expansion of two lower floors, and in 1988 more space was added there. There are now over 50 miles of shelves within Firestone. Over the years, the areas housing periodicals, the reserve collection, photoservices, and microforms have been moved and redesigned to provide better access. 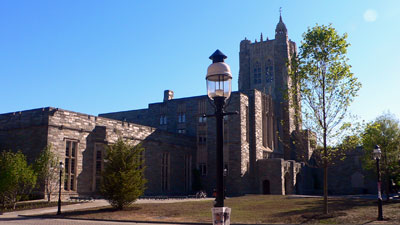 Since its founding more than 250 years ago, the library system at Princeton has grown from a collection of 474 volumes in one room of Nassau Hall to holdings in more than a dozen buildings throughout the campus. The collections total more than 7 million printed works, 83,000 serial titles, 6.7 million microforms, and 49,000 linear feet of manuscripts (2011). In addition, the library subscribes to thousands of electronic resources including indexes, reference tools, e-books, electronic journals, numeric data, digital maps, sound recordings, and images.

Over the past several years, librarians have worked to greatly expand access and research services to the PU community through virtual means and next generation discovery technology as evidenced in its SearchIt implementation.  At the same time, the library continues to partner with digital humanities efforts both on campus and beyond, in-house digitization efforts and large-scale international project initiatives.  Still over the centuries the library's objective has remained consistent: to further the advancement of learning at Princeton University.

Looking Ahead at Firestone

Today and for several years to come, Firestone will be undergoing a complete renovation. The renovation is conceived as a long-term project that is being  done in multiple phases and will take almost 10 years to finish, during which time the library is remaining open, and its collections available during normal hours of operation.  For information about this project, areas affected, and phases of construction, please refer to the Firestone Library Renovation page.