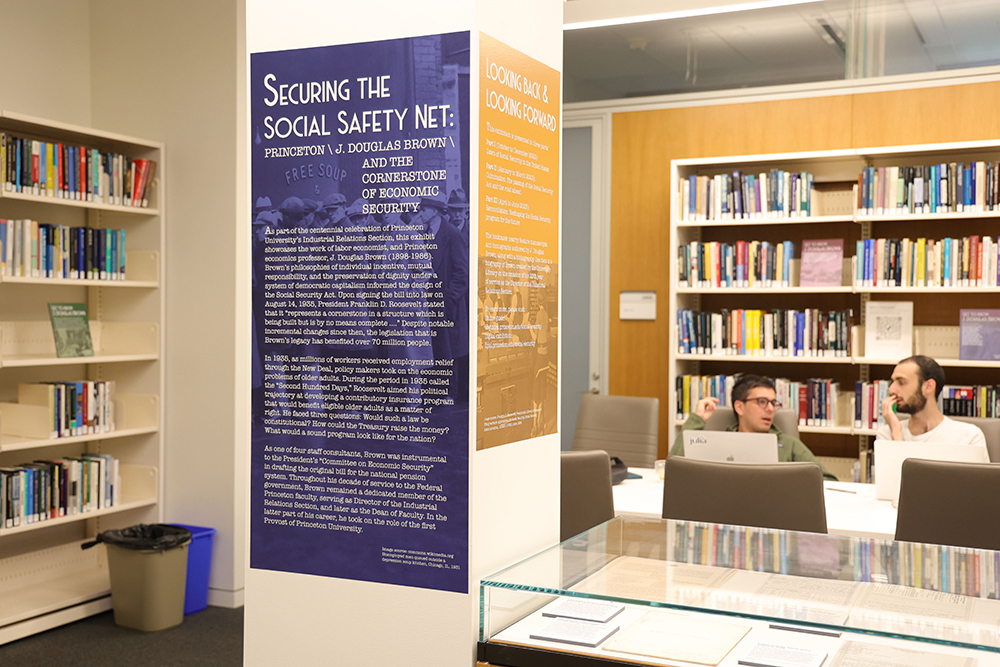 A new exhibition entitled “Securing the Social Safety Net: Princeton, J. Douglas Brown & the Cornerstone of Economic Security,” opens October 7, 2022 in the Industrial Relations (IR) Section at Princeton University. The exhibition was created to help mark the 100-year anniversary of the IR Section.

“This exhibition highlights the central role that members of the Industrial Relations Section have played for nearly a century in contributing to economic and social policies at the federal level,” said Leah Boustan, director of the IR Section at Princeton University. “The original Social Security Act of 1935 demonstrates the complexities of designing policy subject to political and economic realities. We hope that the example of J. Douglas Brown will inspire students and faculty to work on socially meaningful topics that contribute to the public good.”

The exhibition–jointly developed by Princeton University Library (PUL) and the IR Section–showcases the work of labor economist, and Princeton economics professor, J. Douglas Brown '19, *28, (1898-1986). Brown’s philosophies of individual incentive, mutual responsibility, and the preservation of dignity under a system of democratic capitalism informed the design of the Social Security Act. Upon signing the bill into law on August 14, 1935, President Franklin D. Roosevelt stated that it “represents a cornerstone in a structure which is being built but is by no means complete ….” Despite notable incremental changes since then, the legislation that is Brown’s legacy has benefited over 70 million people.

In 1935, as millions of workers received employment relief through the New Deal, policy makers took on the economic problems of older adults. During the period in 1935 known as “The Second Hundred Days,” Roosevelt aimed his political trajectory at developing a contributory insurance program that would benefit eligible older adults as a matter of right. He faced three questions: Would such a law be constitutional? How could the Treasury raise the money? What would a sound program look like for the nation?

As one of four staff consultants, Brown was instrumental to the President’s “Committee on Economic Security” in drafting the original bill for the national pension system. Throughout his decade of service to the Federal government, Brown remained a dedicated member of the Princeton faculty, serving as Director of the Industrial Relations Section, and later as the Dean of Faculty. In the latter part of his career, he took on the role of the first Provost of Princeton University. 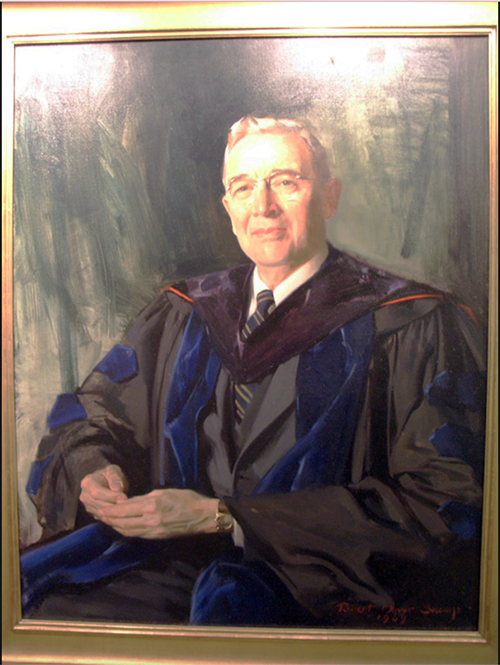 The exhibit is curated by Charissa Jefferson, PUL’s Labor Economics librarian and liaison to the IR Section. “An oil on canvas portrait of J. Douglas Brown (see image) wearing regalia is prominently displayed inside the lobby of the Industrial Relations Section,” Jefferson said. “When I began curating an exhibition in celebration of the IRS centennial, Brown’s wise and humble smile drew me in to learn more about who he was and what he contributed to the Section, University, and our nation's economy as a whole.”

PUL’s Special Collections houses the J. Douglas Brown Papers of which there are 90 boxes. Through the research process in preparation of this exhibition, over 50 items of Brown’s writings and records on Social Security from this collection are now available digitally. Many of these items on display are reproductions of the letters or telegrams between Brown and members of the Committee on Economics Security, the Social Security Board, and the Advisory Council on Social Security. These artifacts will be showcased in a three chronological part series, which will rotate new items every three months until the conclusion of the exhibition in June 2023. Other items on exhibition are from the IR Section Records from the University Archives, as well as ephemera, such as pamphlets and other documents from the former Industrial Relations Library beginning from the 1930s.

The exhibit will also feature a selection of one dozen facts to get to know J. Douglas Brown better. Specially designed mounts to showcase a selection of books authored by J. Douglas Brown, as well as a video reel that demonstrates a brief history of social insurance in the United States by the Social Security Administration, will be available for learners. To accompany the exhibit, a small collection of new books will be added to the IR Section reading room, where the exhibit is located.

Check out the corresponding online resources LibGuide as well as the companion Digital Princeton University Library site featuring the newly digitized content from the collection.

Find out more about the Industrial Relations Section and its current research interests.