Though it is hard to believe, this recent addition to Marquand’s rare book collection is actually a student project by Emmet Gowin—distinguished American photographer, and Professor Emeritus of Visual Arts at Princeton. It is particularly fitting that this splendid example of student work at its best should find a home at Princeton. The senior thesis is a quintessential part of a Princeton education, and the creativity and intellectual engagement of that experience are in every way hallmarks of Gowin’s project.

In 1965, BFA candidates at Richmond Professional Institute had to produce one-hundred copies of a book of original art. Gowin’s effort was this collection of fourteen gelatin silver prints, paired with provocative texts on the power and meaning of photography, bound in a cover of Gowin’s design. Concerning America is a declaration of artistic aspiration, and an homage to Gowin’s exemplars, the American photographers Alfred Stieglitz and Robert Frank.

The title of Gowin’s thesis is a witty reference to an iconic 1934 book, America & Alfred Stieglitz: A Collective Portrait (Garden City, NY: Doubleday, Doran & Company), which was a collection of essays published as a tribute to Stieglitz on his seventieth birthday. All the texts in Gowin’s book were selected from the Stieglitz volume. For example, Gowin paired his first four photos with a lengthy passage from Paul Rosenfeld’s essay “The Boy in the Dark Room” (p. 59-88). In that essay, Rosenfeld expounded on the college-aged Stieglitz’s “flashlike quickness and exquisite sensitivity and subtlety,” and the camera’s peculiar ability to record his “exquisite visions accurately in all their original complexity”—sentiments that provide a window onto Gowin’s own creativity and drive.

With the civil rights movement unfolding around him, Gowin found inspiration in the street photography of Robert Frank. In 1963, he traveled to New York to seek Frank’s professional advice, so it is no accident that Concerning America echoes—in conception, layout, and imagery—Les Américains, the original, French edition of Frank’s landmark photo book. Gowin’s prints, in their subjects, saturated tones, and artful contrasts of light and dark, show a strong debt to Frank. 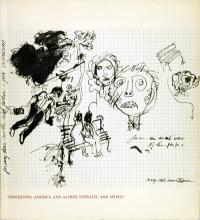 The wrapper of Gowin’s book mimics the distinctive Saul Steinberg cover for Les Américains. Frank’s controversial publication, which like Gowin’s featured an amalgam of excerpted texts, was not issued in a U.S. edition until 1959 when it appeared as The Americans with an introduction by Jack Kerouac.

Marquand’s copy of Concerning America is especially resonant as the one that Gowin presented to his parents. It bears his handwritten inscription “For my dear mother and father—PAX VOBISCUM” on the cover. In 1982, a comparable familial affection led Wesley Wright, Jr. ’51 and his wife, Elise, to create an endowment for Marquand acquisitions. The Wrights wished to honor their daughter, Elise Wright ‘83, and her transformative experience studying photography with Emmet Gowin.