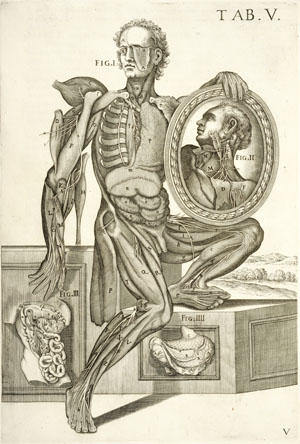 Pietro da Cortona’s Tabulae anatomicae, one of the most artistic anatomical atlases ever produced, was not published until more than 70 years after the artist’s death. Early in his career, Pietro made studies of the work of anatomists, including Nicolas Larché, whose dissections in Rome were also studied by Poussin. The plates in this book may derive from a series of anatomical drawings Pietro made for the Roman surgeon Giovanni Maria Castellani, who became head of the Ospedale Santo Spirito in 1620. Although the drawings have been dated to around 1618, from the erased date that can be discerned in two plates with the “LC” mark of the engraver Luca Ciamberlano (fl. 1599-1641), they were not published until 1741 by Gaetano Petrioli.

Petrioli, a professor of medicine and surgeon to King Victor Amadeus II of Sardinia, edited and promoted other publications of this type, including those of the sixteenth-century anatomist Bartolommeo Eustachius. As a leading High Baroque artist and architect, Pietro da Cortona was still revered in the eighteenth century, so his name would have added greater prestige to an anatomical publication. The dramatic and elegant poses of the dissected figures, such as this one, artfully balancing a framed image of the nerves of the neck, and the arrangement of the figures against architectural fragments, often with a hint of idyllic landscape in the distance, would have made Pietro’s studies an attractive project for his editor. Petrioli added a commentary and small accessory figures, derived from Andreas Vesalius, Giulio Casserio, and other anatomists. Plates 21-26, which are considered stylistically different, were also added at this time. In a second edition, published in Rome in 1788, Petrioli’s figures had been removed and his text replaced by that of Francesco Petraglia, a professor of medicine and philosophy.

Not until the 1970s, were the original drawings by Pietro da Cortona for twenty of the plates rediscovered by art historians in the Hunterian Collection at the University of Glasgow Library. The drawings had been deposited there by the obstetrician, anatomist, and connoisseur, William Hunter. Hunter had obtained them from another celebrated collector, Sir William Hamilton, ambassador to the King of Naples, in 1772. From his professional experience, Hunter judged the original purpose of the drawings, with their focus on nerves, muscles, and blood vessels, to have been for a neurological study rather than for a regular anatomy or an artist’s anatomy book. Petrioli’s additions would have been intended to give the publication a wider appeal.

Marquand Library’s 1741 edition of this book is on display in “A Fine Addition: New & Notable Acquisitions in Princeton’s Special Collections,” February 12-August 5, 2012, in the Main Gallery of the Harvey S. Firestone Gallery, Princeton University.

For more information on this exhibition.