Written and visual materials related to the Tōkaidō have been collected by Princeton University Libraries for almost a century, but the recent acquisition of the 1797 illustrated guidebook, Tōkaidō meisho zue [Illustrations of the Famous Sites on the Tōkaidō] by Akisato Ritō (1776-1830), is now the first work in Princeton’s Tōkaidō collection to date to the 18th-century. 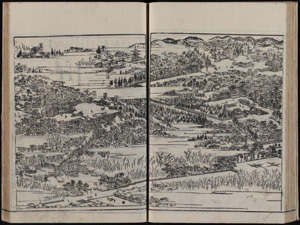 MIIDERA TEMPLE. A complex of over 40 buildings, Miidera Temple was located at the foot of Mt. Hiei near the post station of Otsu in Shiga prefecture. Otsu was the post station closest to Kyoto, the imperial capital. The panoramic view and the labeling of the temple’s important buildings would have helped the 18th century armchair traveler (the book’s primary audience) to get a unique sense of the site’s grandeur.

Published in six volumes with beautifully embossed covers, Tōkaidō meisho zue is one of the most famous of the ‘popular guidebooks’ written for a very literate and ever-growing audience of armchair travelers in Japan from the 17th through 19th centuries. Unlike other guidebooks, however, Tōkaidō meisho zue did not rely on the convention of using humorous characters to describe travel along the Tōkaidō. It offered, instead, sweeping panoramic views of landscapes and charming scenes of everyday life. These images gave the Japanese public both a visual knowledge of the topography of the Tōkaidō and a glimpse of the geographically unique aspects of everyday life around Japan The accompanying text complemented the striking images with historical, mythological, and commercial information about each region. Tōkaidō meisho zue was therefore an important early step in creating the legend of the Tōkaidō Road. 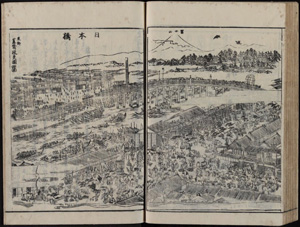 NIHONBASHI (EDO) Unlike the quiet late night scene of Nihonbashi Bridge in the Tōkaidō Scrolls (“On the Road” in New and Notable), here we have a view of the bustling city of Edo at dawn. The busy fish market lies in front of the wooden bridge in the foreground and Mt. Fuji rises in the background. This is the final illustration in Tōkaidō meisho zue. The literary and artistic conventions for depicting the journey would shortly become codified as a trip from Tokyo to Kyoto, but in late 18th century guidebooks, travel along the Tōkaidō could run in either direction.

Over thirty percent of Tōkaidō meisho zue’s pages are illustrations. They were designed by Akisato Ritō’s collaborator, Takehara Shunchōsai and the twenty-five artists he selected to help him with the project. Many of these images then became the inspiration for Ukiyo-e artists like Katsushika Hokusai and Andō Hiroshige as they began to produce woodblock prints that focused on landscape themes and plebian life outside the capital city of Edo in the decades following. Tōkaidō meisho zue’sinfluence, for example, can be seen in prints from the earliest of Hiroshige’s Fifty-Three Stations of the Tōkaidō (Tōkaidō gojūsantsugi) series. In the depiction of Yahagi Bridge at Okazaki (pictured below), the composition, the vantage point of the viewer, and the Daimyo (feudal lord) procession across the bridge are all reminiscent of the same scene pictured in the 18th century guidebook (see the following image). Although Hiroshige had actually traveled the Tōkaidō Road, and made sketches along the way, it is clear that his print was a least partially inspired by the visual convention for this post station established thirty years earlier by Tōkaidō meisho zue. 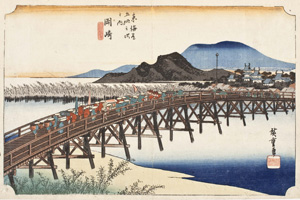 Forced to live at the capital under the watchful eye of the shogun, feudal lords were allowed to return to their home provinces on alternate years to conduct business.
Here, the procession crosses the Yahagi Bridge on the lord’s return to Edo, where his family has remained as insurance against his attacking the capital with his armies.
Okazaki Castle looms in the background of the composition. Hiroshige has compressed the Tōkaidō meisho zue composition, bringing
it closer to the viewer and creating a more focused and dynamic image. 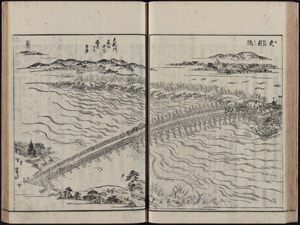 YAHAGI BRIDGE AT OKAZAKI (Aichi prefecture). Views which impart the vastness of the countryside are typical of the scenery in Tōkaidō meisho zue. Here too, a small procession crosses the bridge, but, unlike Hiroshige’s figures, they are lost in this panoramic landscape. Okazaki Castle seems much further away, and the viewer sees much further into the distance, to the 7th century temple Takisanji in the upper left corner.

In addition to panoramic views of the countryside, Tōkaidō meisho zue also features more focused vignettes of everyday life, like the bustling Edo street scene below. For the modern scholar, these scenes are a wealth of information about life in the capital at the end of the 18th-century, and one often finds them used to illustrate today’s history and sociology texts. In the following scene featuring the shops of two Edo publishers, for example, we can clearly see tiny depictions of the woodblock prints being sold to passersby. The wide assortment gives us a clear idea of the popular taste in woodblock prints during this period. One of the most interesting of these is a print being sold in the shop on the left which bears a striking resemblance (in reverse) to the two scenes of the Yahagi Bridge in Okazaki mentioned above. Also available are prints of actors, sumo wrestlers, beautiful women and a new type of print—the perspective print (uki-e)—influenced by the ‘one-point perspective’ Japanese artists saw in artworks coming to Japan from the West during this period. (This is the kabuki theatre print to the right of the bridge print in second illustration below.) 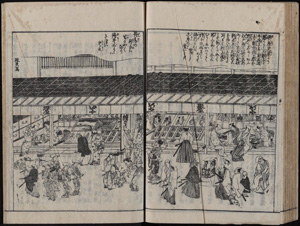 EDO STREET SCENE. (Click on image to see more detail) Here we find the shops of two noted Edo publishers, Masuya and Izumiya, a firm which was in business for over 200 years. The scene is so detailed that we can see, and almost recognize, the woodblock prints offered for sale. The excitement of the city is also captured with a depiction of a variety of its denizens, including samurai (men with two swords), a highly-ranked courtesan with her entourage and bedding (being approached by a samurai on the left), and the couple playing with their child at center.

PRINTS FOR SALE(EDO) showing woodblock print of bridge and a “perspective print” of the interior of a kabuki theatre beside it.

Tōkaidō meisho zue may also be important to the study of the Western art tradition. In 1867 this six-volume set was sent by the Satsuma family to be exhibited in the Exposition Universelle in Paris, where artists like Vincent Van Gogh saw Japanese prints for the first time.