In 1734, Michel-Etienne Turgot (1690-1751), the influential provost of the merchants of Paris (a position roughly equivalent to that of the present-day Mayor), commissioned a new printed map to record and promote the city of Paris. Turgot, perhaps inspired by a set of tapestries depicting a panoramic view of sixteenth-century Paris that had once decorated the Hôtel de Ville, decided against the modern planimetric projection favored by most cartographers by the early eighteenth century, such as the Plan de Paris… by Jean de Lagrive, in favor of the more archaic, but undeniably engaging, axonometric projection, which gave a type of bird’s-eye view of the cityscape, seen in Turgot’s Plan. 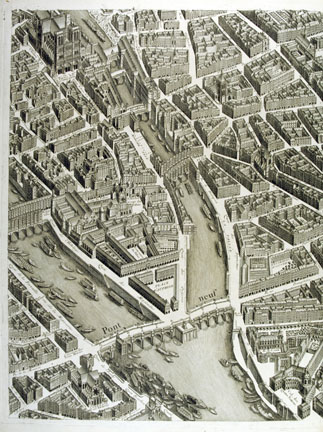 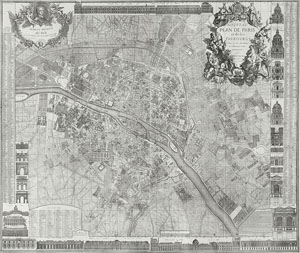 To create the new plan, Turgot selected Louis Bretez, a respected member of the Academy of Painting and Sculpture, and a professor of perspective. The plan showed the first eleven arrondissements of the city and its surroundings, divided into twenty sections. Bretez spent more than two years with his assistants making detailed, measured studies of the buildings and other landmarks of Paris for this project. To accomplish his goal, Bretez was even granted permission to enter private gardens. He undertook to produce two copies of his drawings, one set to be retained by the city (now preserved in the collection of the Musées de la Ville de Paris), and the other set for the engravers. This exhausting task may have been a contributing factor in the death of Bretez’ first assistant, a Monsieur Saury, in March 1736, and of Bretez himself, who died in 1738, before the publication was complete.  In 1736, two engravers, Antoine Coquart and Charles Lucas (1685-1765), had contracted to transform Bretez’s drawings, with added embellishments and a cartouche containing an inscription, into plates to be printed. Pierre Thévenard began printing the individual sheets during 1738, with a final publication date of 1739.  As Turgot had specified, his own name, titles, and role in the undertaking featured prominently in the descriptive cartouche, well above the tiny credits at the end to Bretez and Lucas for their immense labors, ensuring that this would be known to posterity as the "Plan de Turgot".  Handsomely bound volumes were presented to the king and important French and foreign dignitaries, one copy even being sent to the court of the emperor in China. The city presented 85 copies alone to the members and officers of the Academy of Painting. 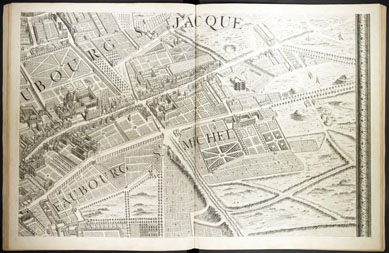 Executed on a scale of approximately 1:400, the Plan captured a view of the Paris in the 1730s in fascinating detail, from its great churches and mansions, to the woodpiles, orchards, and windmills visible in the surrounding countryside -- more mundane reminders of the needs of a great city.  Yet certain aspects of the finished plan are somewhat disorienting and the Plan was not without its critics. Paris is shown as if the viewer were facing east, perhaps in imitation of older maps like that created by Jacques Gomboust in 1652, where buildings were depicted as they would have been encountered if entering the city by boat along the Seine, the route used by much commercial traffic and many visitors. 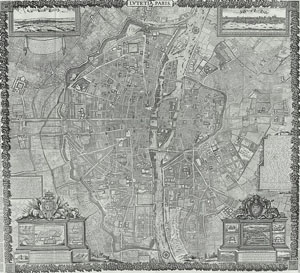 The artists of Turgot’s Plan also used perspective cavaliere, by which buildings of the same size are shown thus everywhere on the map, with no regard for the effects of conventional perspective. The wide, clear streets were also an artistic illusion to accommodate the device of depicting buildings in perspective on both sides of the streets without overlapping, rather than an accurate depiction of the squalor of the eighteenth-century city, with its crowded streets and teeming garbage. The French kings had already moved out to Versailles, away from these urban hazards, in the seventeenth century. Bretez’s vision of a modern, well-ordered city better suited Turgot’s purpose of publicizing the glories of Paris, the commercial and symbolic heart of France. The plates could also be assembled to form a monumental map, measuring approximately 8 ½ by 10 ½ feet. The original engraved plates are still conserved for use by the Louvre’s department of chalcography. The continued visual appeal of Turgot’s Plan de Paris is attested to by recent high-end decorator reproductions in both paper and fabric forms.

Take a complete virtual tour of Turgot’s Paris in the 1730s.

For more information on this exhibition.