Celebrating the famous prostitution district of the town of Itako, this picture/ poetry book [ehon] by Katsushika Hokusai and the poet, Fuji no Karamaro, was banned by the Japanese government in 1803, shortly after publication. The charge was violation of the sumptuary laws forbidding “luxurious printing,” a euphemism used to stop the publication of erotica. Punishment was swift. The printing blocks for the book were destroyed and both the author, Karamono, and publisher, the famous Tsutaya Jūzaburō, were arrested. However, Hokusai, for some unknown reason, remained unscathed. 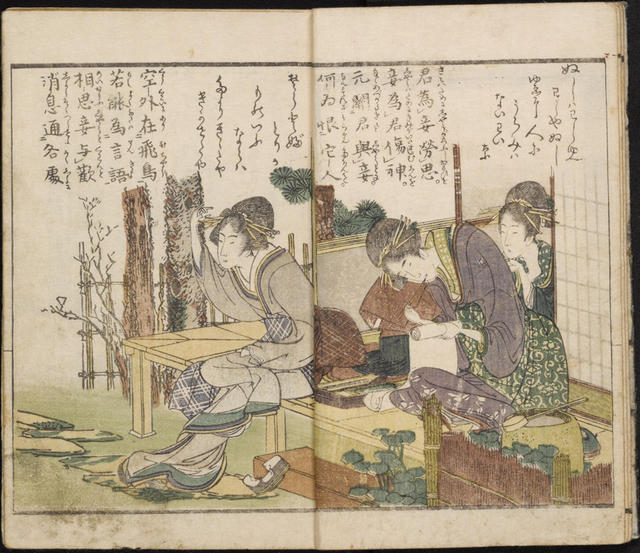 The illustrations in this two-volume set are of the beautiful prostitutes of Itako. It is an intimate portrayal of the women; we not only see them entertaining clients but are also privy to their private moments reading, writing letters, and even crying over lost love. These willowy female figures represent what is known as Hokusai’s “Sori-style.” (Sori was the ‘artist’s name’ Hokusai used between 1795 and 1800. As such, it has become the term used to describe the unique style of his turn of the century work.) Itako zekkushū is one of Hokusai’s last books to feature these delicate, elongated women. This was partly due to changes in Hokusai’s focus, and in a changing ideal of feminine beauty introduced by print artists like Kitagawa Utamaro in the closing years of the eighteenth century. 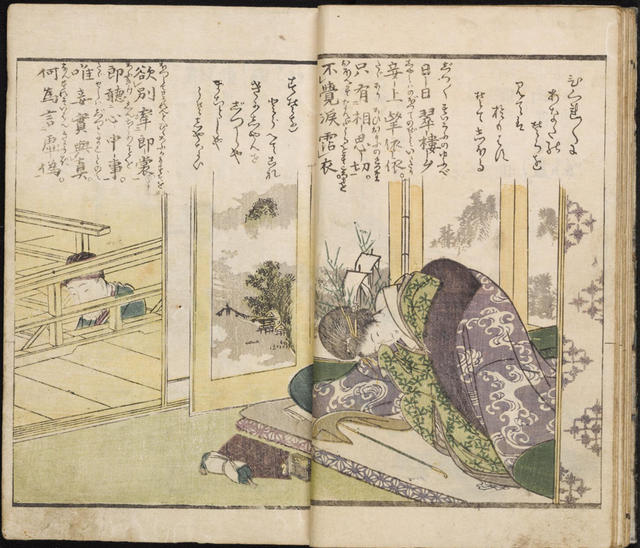 Like many ehon of the period, Itako zekkushū is wickedly satirical. It is a parody about the river town of Itako which, in addition to having a well-known prostitution district, was the departure point from which boatmen ferried religious pilgrims to the major temples and shrines of the region. Fuji no Karamono’s poetic text delights in this irony. The structure pairs verses of a famous Itako folksong sung by boatmen to their pious passengers with parodies of each stanza in the form of a Chinese-style poem of five or seven lines. 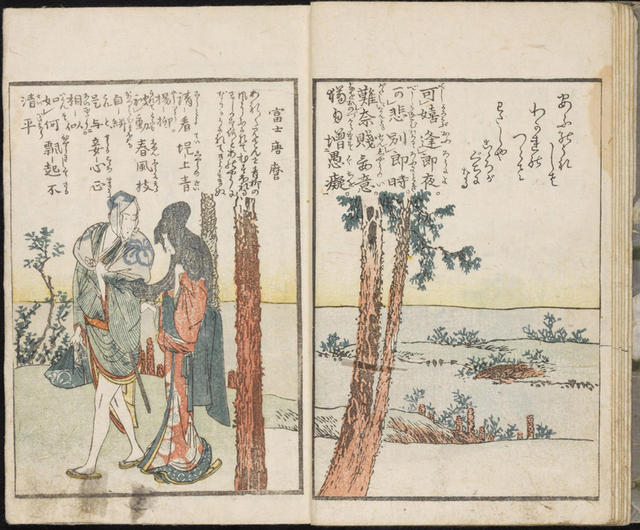 Publications that referred to an unlicensed prostitution district like the one in Itako were illegal under the repressive rule of the Tokugawa shoguns (1603-1868). The brothels were not secret, and people were undoubtedly aware that the success of prostitution was the result of the Itako pilgrims, but acknowledging and lampooning the district’s existence may have been yet another reason for its swift censorship. Ultimately, the banning of Itako zekkushū and the destruction of its blocks so that there could be no future printings resulted in this book becoming extremely rare. The two-volume set, however, can now be accessed in digital format through the Princeton University Digital Library.