The Princeton University Library is pleased to announce the acquisition of an eighteenth-century scribal score (297 pages) of George Frideric Handel’s three-act opera Berenice, copied by a contemporary Handel copyist (“S2”) from the composer’s autograph manuscript. The scribal score is complete but for Berenice’s aria “Avvertite mie pupille” and opens with the title page reading, “Berenice Opera Composta per il Sgr G:F: Handel / Comminciato December: 15 1736.” Handel’s opera seria concerning the life and loves of Queen Cleopatra Berenice of Egypt around 80 B.C.E. was based on an Italian libretto by the Florentine poet Antonio Salvi, who entitled it Berenice, regina d'Egitto. The opera premiered at London’s Covent Garden in May 1737. The present score was in the library of Charles Jennens and bears his shelfmark. Jennens was Handel’s patron and is perhaps best known as the librettist of Messiah. The score is for voices and orchestra (strings, oboes, bassoons, and continuo), with figured bass throughout and a few additional figures added by Charles Jennens. 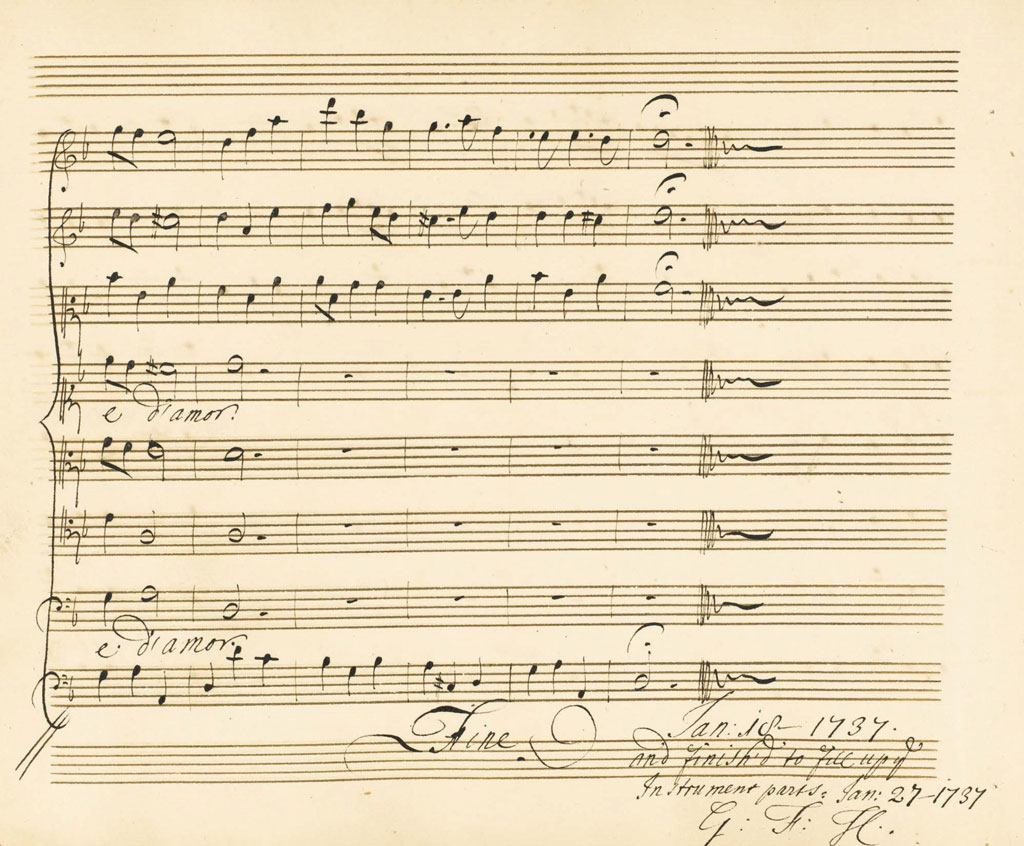 Wendy Heller, Princeton Professor of Music. and Director of the Program in Italian Studies commented on the acquisition which she plans to use in her classes.

“This is a particularly exciting acquisition for the Princeton University Library.  Composed somewhat late in Handel’s career as an opera composer, as his attention was shifting to oratorio, Berenicewas somewhat less popular than Handel’s earlier Italian operas, but nonetheless is a brilliant score with a number of stunning arias.

The story of Berenice’s journey to Princeton has some mysterious gaps.  The manuscript was originally part of Charles Jennen’s substantial music library, which included the largest contemporary collection of Handel manuscripts.  The collection was then inherited by the 3rd Earl of Aylesford, and was broken up and scattered after the Earl’s death.  Berenice was last seen in 1918 when it was offered for sale at Sotheby’s with a number of others from the “Aylesford Collection,” at which point it disappeared from sight until Sotheby’s listed it in their catalog this fall, where it was spotted by one of our second-year graduate students, Stephen Rauskaskas.  Indeed, such opportunities are infrequent. As the noted Handelian John Roberts remarked to me ‘major Aylesford manuscripts are offered for sale only rarely.’ Regardless of where Berenice spent the last 94 years, she could not have appeared at a more opportune moment.  Berenice will be the centerpiece of an exhibit at Firestone Library that is being planned by the students of my seminar (Music 520, Music and Theater in Handel’s London) for the meeting of the American Handel Society in Princeton and the American Handel Festival, February 21-24, 2013.  My warmest thanks to Princeton University Library for making this important acquisition possible.”

The manuscript will complement the Library’s James S. Hall Collection of George Frideric Handel, in the Department of Special Collections. Among eighteenth-century scribal scores in the manuscripts portion of the Hall-Handel Collection (C0640) are those for the oratorios Belshazzar, John Balus, and Joseph, copied in about 1745 by John Christopher Smith (the elder) for Frederick, Prince of Wales. The Berenice manuscript, along with several manuscripts and early printed editions from the Hall-Handel Collection will be exhibited in the Library’s Eighteenth-Century Window in from February 1, 2013 to March 4, 2013.