Published between 1922 and 1926, Hakuyō was the monthly magazine of the Japan Photographic Art Association (Nihon Kōga Geijutsu Kyōkai), the first national Japanese organization with ‘art photography’ (geijutsu shashin) as its focus. It is within the pages of this journal that the artistic evolution from traditional Pictorialism to modernist expressionism in Japanese photography is documented with both images and with essays about the medium by the artists themselves. Because of this, Hakuyō is considered one of Japan’s most historically important photography publications. 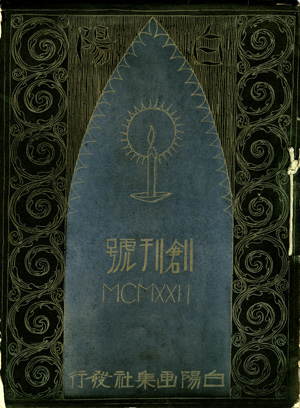 Although relatively few copies of Hakuyō survive, Marquand Library has been fortunate to acquire 17 original issues, including a special edition catalog of the first exhibition of works by members of the Association held in 1923 (see below). It allows us more of a sense of the development of the serial than has previously been possible. Early issues of the magazine, for example, are unique in size, shape, and in the very modern Western images printed on their covers. In 1924, however, the dimensions of the magazine became uniform, and by 1925, covers were printed with the identical design of a woman playing the guitar on differently colored stiff papers (see above). All issues of this publication are beautifully designed, decorated with printed flourishes on pages of text, and filled with finely printed collotypes that have been tipped in. 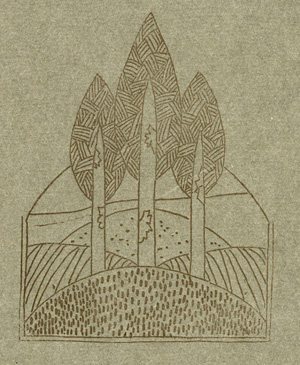 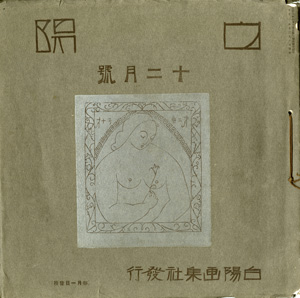 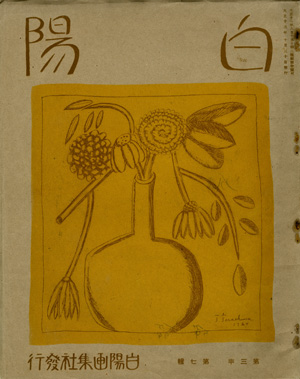 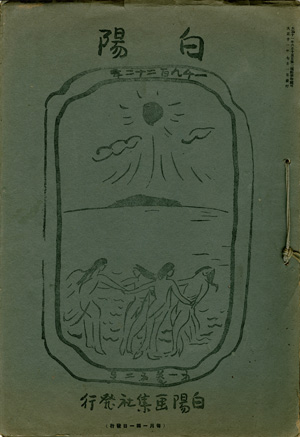 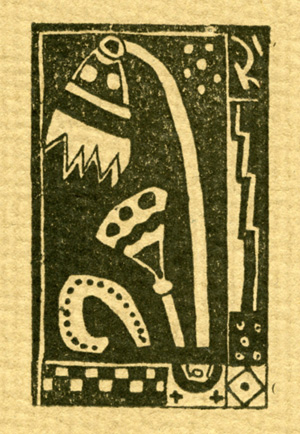 Design on back covers of 1925 issues 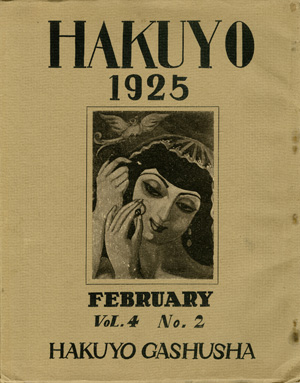 Both Hakuyō and the Japan Photographic Art Association (JPAA) were founded around the same time by photographer Fuchikami Hakuyō (1889-1960), who owned a photography studio in the city of Kobe. It is believed that the organization was formed around producing the first issue of Hakuyō in 1922, although most of photographs in it are those of Hakuyō.

In general, Japanese photographers of this period were greatly influenced by the West, and particularly by Pictorialism, a movement that had begun in Europe at the end of the nineteenth century. Pictorialists eschewed the documentary aspect of photography and attempted to make their photographs appear more like paintings. Their portraits and images of nature were conceived in half tones and soft focus. Efforts were also made to enhance the texture of photographs to give them a painterly feel. This visual link between painting and photography was especially appealing to Japanese photographers who were struggling to elevate photography to a fine art in early 20th-century Japan. We consequently see these photographers embracing the Pictorialist style in earlier issues and in the JPAA’s 1923 group exhibition catalog (see catalog below). Like other fine artists in Japan, Fuchikami and his fellow art photographers also eschewed the term “professional” and its commercial connotation and referred to themselves as “advanced amateurs." 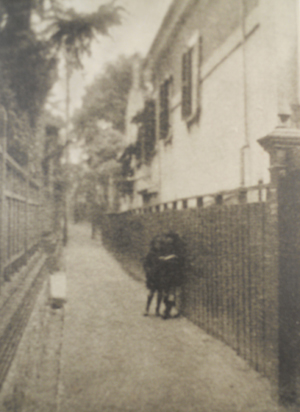 Fuchikami Hakuyō (1889-1960), Foreigners in the Street at Noon Hakuyō, Volume 1, No. 1 (1922) This photograph, in the style of Western Pictorialism, is typical of Fuchikami’s work before 1925. Explanatory notes on the flyleaf indicate that it was taken in March of 1922 in the Kitano district of Kobe. It was an area of the city occupied by foreign residents, and is still famous today for its Western-style architecture. 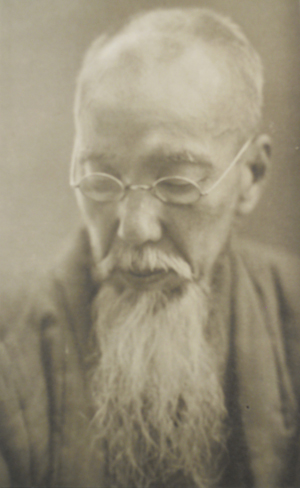 By 1925, the images that appeared in Hakuyō were very different. The photography of the JPAA had been transformed into a new kind of modernist expressionism influenced by Western Constructivism and the changing urban environment. Surprisingly, this was not a casual development over time, but a twist of fate caused by a natural disaster. 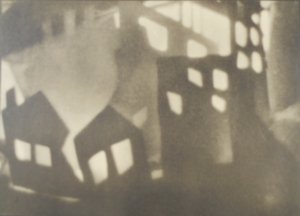 The Great Kanto earthquake, which devastated Japan’s capital city of Tokyo in 1923, forced the relocation of artists of the MAVO group to western Japan. Heavily influenced by European avant-garde movements like Futurism, Dadaism, and Constructivism, MAVO spearheaded new art movements in Japan. Now, newly settled in the Kobe area, the MAVO group members encountered Fuchikami Hakyuyo and the JPAA.  Their exchange of ideas resulted in the birth of the Japanese Constructivist School (kōsei-ha).

The pages of Hakuyō clearly document the transformation that took place in photography over the next few years. We see there is a breaking away from the conventions of Pictorialism and a movement toward more abstract notions of beauty found in manufactured motifs and urban landscapes. By 1925, the artist essays that accompany the pictures describe the photograph as a work of abstract art. Fuchikami himself, in an article entitled “Impressions, Still Lifes” (Kansō seibutsu) in a 1925 issue of Hakuyō, [vol. 4, no. 1] declares that “[t]he ultimate reason for viewing nature is to discover the emotive qualities of abstracted nature.” 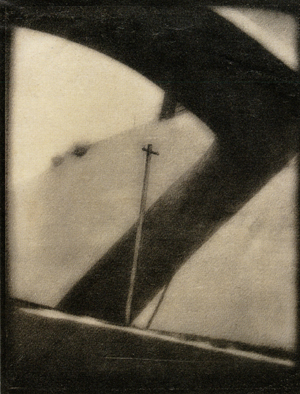 Tsusaka Jun (1900-1963), Bridge in Hakuyō, Volume 5, No. 6 (1926) Tsusaka Jun was one of the Japan Photographic Art Association’s first members in 1923. He had learned photography while working in the Kobe shipyards and at an aircraft manufacturing plant in Nagoya. Like other members of the association, his early work featured traditional subject matter photographed in soft focus. In 1925, however, inspired by Fuchikami Hakuyō, Tsusaka joined the Constructivist School movement and broke away from nature studies and portraits to become one of Japan’s most famous avant-garde photographers. In this photograph, considered a hallmark of Constructionism, Tsusaka treats his subject matter—an urban landscape—as an abstract construction.

Despite the ephemeral nature of the magazine in general and the transience of old photographs, we are fortunate that these issues ofHakuyō have survived to document 1920’s Japanese photography and its first steps toward modernism. 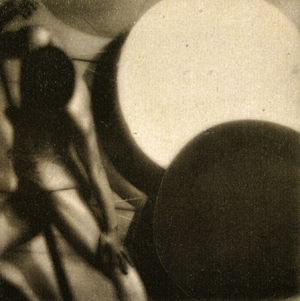 CATALOG OF THE FIRST EXHIBITION OF THE JAPANESE PHOTOGRAPHIC ART ASSOCIATION 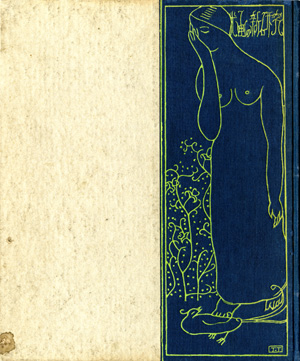 Published as a special issue of Hakuyō in November 1923, this volume is the catalog for the first exhibition of the Japan Photographic Art Association. The exhibit was sponsored by the newspaper publishing company, Osaka Mainichi Shinbunsha and features work largely inspired by Western Pictorialism. 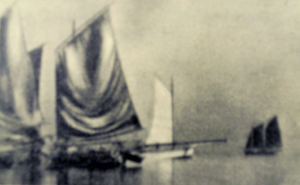 Takada Minayoshi (1899-1982), Departing Boats Though his work was rooted in the Pictorialist-style seen in this 1923 photograph, Takada later became one of the leading proponents of Constructivism. 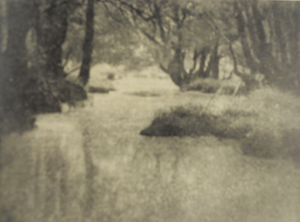 Kagiyama Ichirō (active 1906-after 1941), Lake (Marsh) As seem here, simulating the texture of paintings was an important aspect of Japanese Pictorialism. Not much is known about the “amateur” work of Kagiyama, who spent over 30 years in Australia as commercial photographer to the Japanese community living there.