Sometimes referred to as the “German Vasari,” Joachim von Sandrart, born in Frankfurt, trained first as a printmaker, notably in Nuremberg, and in Prague with Aegidius Sadeler. He then studied painting from 1625 on, originally in the studio of Gerrit van Honthorst in Utrecht, where he met Rubens. After a long and successful career in the foremost artistic circles in England, Italy, and the Netherlands, he returned to Germany and painted for Emperor Ferdinand III, for which he was ennobled in 1673. In the latter part of his life, Sandrart settled in Nuremberg and turned to publishing projects and teaching. His most important publication, the Academia todesca, better known as the Teutsche Academie, was the first comprehensive treatise on the history of art written in German. The first volume, dated 1675, offered theoretical and historical accounts of the arts of architecture, sculpture, and painting, lavishly illustrated with hundreds of prints, many depicting objects in notable collections. It also included sections on the lives and stylistic characteristics of famous artists from classical antiquity to Sandrart’s own time. A second volume, published in 1679, expanded these areas and added a translation of Ovid’s Metamorphoses. An abridged Latin translation of the biographies was published in 1683. 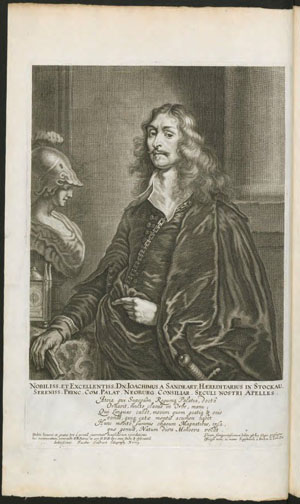 Sandrart’s project was nurtured by his connections with the prestigious “Fruitbearing Society,” (Fruchtbringenden Gesellschaft), which honored him with membership in 1676.  Founded in Weimar in 1617 by Duke Ludwig of Anhalt-Köthe, the society promoted the use of German as both a literary and scholarly language. One if its members, Sigmund von Birken, a Nuremberg poet, provided editorial assistance with Sandrart’s complex reworking of many earlier sources, such as Karel van Mander’s Schilder-boeck and Giorgio Vasari’s Lives. Sandrart’s original contributions included the first published biography of Matthias Grünewald, and a greater emphasis on non-Italian artists. Albrecht Dürer, who occupied a special place in Sandrart’s pantheon of German artists, was the subject of a long chapter. The author purchased and restored Dürer’s grave in Nuremberg’s St. Johannis Cemetery, where he himself was later buried. 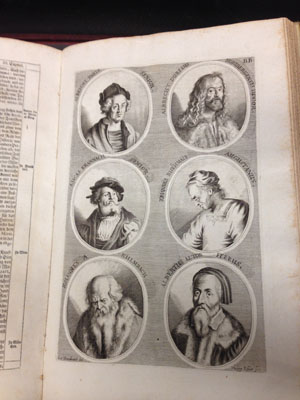 Although Sandrart played a role in the founding of art academies in Nuremberg (1662) and Augsburg (1670), these were initially fairly informal gatherings, where artists met to draw from live models and antique sculptures, and exchange ideas. The “Academy” of Sandrart’s title was a more ambiguous concept, suggesting a “universal school for the arts” dedicated to all German “Kunst-helden,” the heroes who were practicing artists, as well as “Kunstliebender,” admirers of art, such as patrons and collectors. 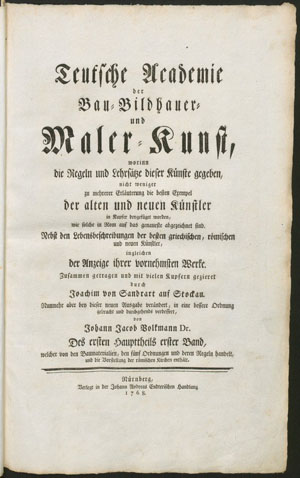 Almost a century after the appearance of Sandrart’s Academia todesca, Johann Jacob Volkmann (1732–1803) published a radically enlarged and reorganized edition (eight volumes), eliminating the Italian introduction of the title in favor of the proudly German Teutsche Academie, for a new generation of German-speaking art amateurs, academics, and Enlightenment literati. Volkmann, trained in law, mathematics, and languages in Göttingen and Orleans, traveled widely in Europe and was a prolific author of diverse works on topics such as art, topography, and economics, including his three-volume Historische-kritische Nachrichten von Italien (Leipzig, 1770–71; 2nd edition, 1777–78).

In this vastly expanded reworking, Volkmann was able to reuse the original plates for the prints, left by Sandrart to his widow, Esther Barbara Blommart von Sandrart (1651–1731), from whom they were purchased by the astute Nuremberg publisher Andreas Endter. In addition to republishing the original sections, Volkmann introduced much more material that would be of value to those working in the nascent discipline of art history. The new volumes included more of Sandrart’s other publications, such as his work on iconography, Die Ikonologie der Götter, originally published as Iconologia Deorum in 1680, as a supplement to the Academia todesca. Also added were several hundred prints by Sandrart’s great-nephew Johann Jacob von Sandrart (1655–98), a noted printmaker and publisher, including sixty prints after figures by Salvator Rosa; others after frescoes by Giovanni Lanfranco in Rome; scores of views of Roman gardens; and a small group of prints by Susanna Maria von Sandrart, Joachim’s great-niece. Volkmann also included an expanded biography of the artist in the first volume of his work. 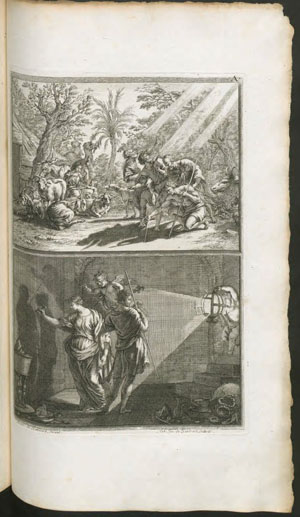 The Discovery of Drawing,” after Joachim von Sandrart, used in both the original edition of L’Academia todesca… and Volkmann’s Teutsche Academie…

All eight volumes of Volkmann’s edition of Sandrart may be consulted online at the Princeton University Digital Library.