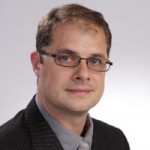 He will succeed founding Executive Director Eileen Henthorne, who will be retiring after 12 years of leadership at the facility, during which she helped build the facility from its early beginnings into a collaborative service organization with more than 10 million volumes dedicated to preserving information for the many thousands of researchers, students, and scholars who rely on the libraries’ collections every day.

“ReCAP is an incredible institution. It addresses a critical need among 21st century libraries and archives, which require massive capacity to collect and preserve research materials for future generations,” said Nadal. “It is an honor to follow in the footsteps of Eileen, who led a visionary effort by the ReCAP members to build a facility that has dramatically improved the preservation outlook for their collections. In my work, both in the States and internationally, I have had poignant reminders of what happens when society's records and cultural heritage are placed in jeopardy or lost to their communities. ReCAP is a bulwark against that for three of the world's great library collections, and it is poised to take a leading role in an emerging network of preservation repositories that will make sure that our nation's library and archival collections remain available to the people who need them. I am thrilled to continue this work with The New York Public Library, Columbia University and Princeton University."

Nadal – who will start on January 1 - will be responsible for the management of the facility: planning and operational issues, as well as service improvements; overseeing the technology system and website; managing construction and renovation projects; and ensuring that ReCAP’s operation meets the expectations of the three partner libraries and their users.

“Jake has a deep background in preservation and combined with his sophisticated experience of print and digital collections, he has a developed a thorough understanding of the interplay that exists within collections,” said James Neal, Vice President for Information Services and University Librarian at Columbia University.

“It is imperative that libraries avail themselves of new opportunities that allow greater interaction with patrons and increase the availability of materials through strategic and progressive methods. Jacob has long been a staunch advocate for libraries and the accessibility of their collections. We are fortunate to have him at the helm,” said Ann Thornton, Andrew W. Mellon Director of the New York Public Libraries.

“Jake demonstrated great leadership at the UCLA Library and throughout University system. He is well-versed in managing the needs of a diverse collection, while supervising and developing a talented staff.  Under his thoughtful leadership, ReCAP will continue to prosper as an exceptional example of library collaboration and facility,” said Karin Trainer, Princeton University Librarian

Before joining ReCAP, Nadal – a leader in the preservation field - served as Director of Library and Archives at the Brooklyn Historical Society.  He is the past chair of the American Library Association’s Preservation and Reformatting Section and has led preservation programs at University of California – Los Angeles (UCLA), Indiana University, as well as The New York Public Library in the organization’s preservation department.

ReCAP was designed and constructed to provide an optimal environment for preserving items and maintain an efficient inventory and retrieval system for access to items for library users. Comprised of five state-of-the-art modules, the facility can accommodate approximately ten million volumes, including monographs, journals, archives, music recordings, microfilm, maps, photos and negatives, videos and three-dimensional objects, and more.