In celebration of the two-hundredth anniversary of Latin America’s wars of independence, the Princeton University Library has mounted a dramatic display of medals and orders that illustrate the recognitions awarded to soldiers and civilians in the form of wearable insignia. “From a Thankful Nation” opened on Friday, February 21, in the Main Exhibition Gallery of Firestone Library on the Princeton campus. 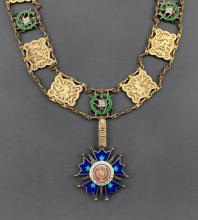 Guatemala Order of the Quetzal

The exhibition features hundreds of Latin American decorations, ranging from a plain silver medal awarded to an officer of the Buenos Aires armed forces that freed Montevideo from Spanish colonial rule in 1814, to Guatemala’s highest award given to foreign presidents, the Collar of the Order of the Quetzal with its Mayan motifs, to a gilt example of the Cuban Order of Che Guevara, awarded for assistance to Latin America’s many left-wing movements of national liberation. Unlike the United States, which has generally avoided the award and wearing of medals as a vestige of European royal practice, the Spanish-, Portuguese-, and French-speaking nations of the New World have embraced such displays as tangible expressions of appreciation for the efforts of their soldiers and citizens. A complete inventory of medals in the exhibition may be found here.

An exhibition opening and reception will take place on Friday, February 28, at 4pm in Firestone. It will be preceded by a curatorial tour with Alan Stahl beginning at 3pm.