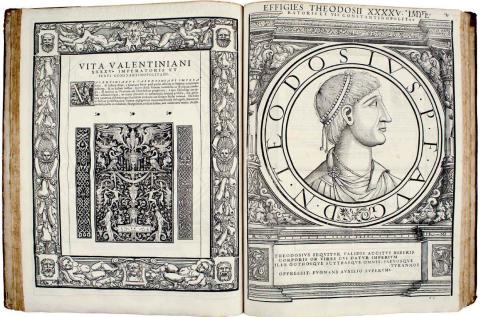 Marquand Library is currently exhibiting two elegant books of portraits by Jacopo Strada, an artist who played a complex role in the cultural life of Renaissance Europe’s most powerful courts. Imperatorum Romanorum…, a regal, folio-sized volume published in 1559, features 118 full-page portrait heads of emperors from Julius Caesar to the recently deceased Holy Roman Emperor, Charles V. Strada’s aim was to enhance the Austrian Habsburg dynasty’s imperial claims. Each emperor’s individualized portrait, enclosed by an elaborate Renaissance architectural frame, was derived from an exhaustive study of antique coins and medals that Strada had done in the 1540’s. Interspersed with the striking portraits are 248 woodcut ornaments in the arabesque or Moresque style by Peter Flӧtner whose designs were frequently used as patterns for the decoration of glass, majolica, textiles, and furniture. In his Epitome dv thresor des antiquitez…, published in 1553, Strada created 391 striking miniature portraits also derived from his manuscript study of coins and medals. This second book was of great value for the study of numismatics which thrived as a gentlemanly pursuit during the mid-16th century.