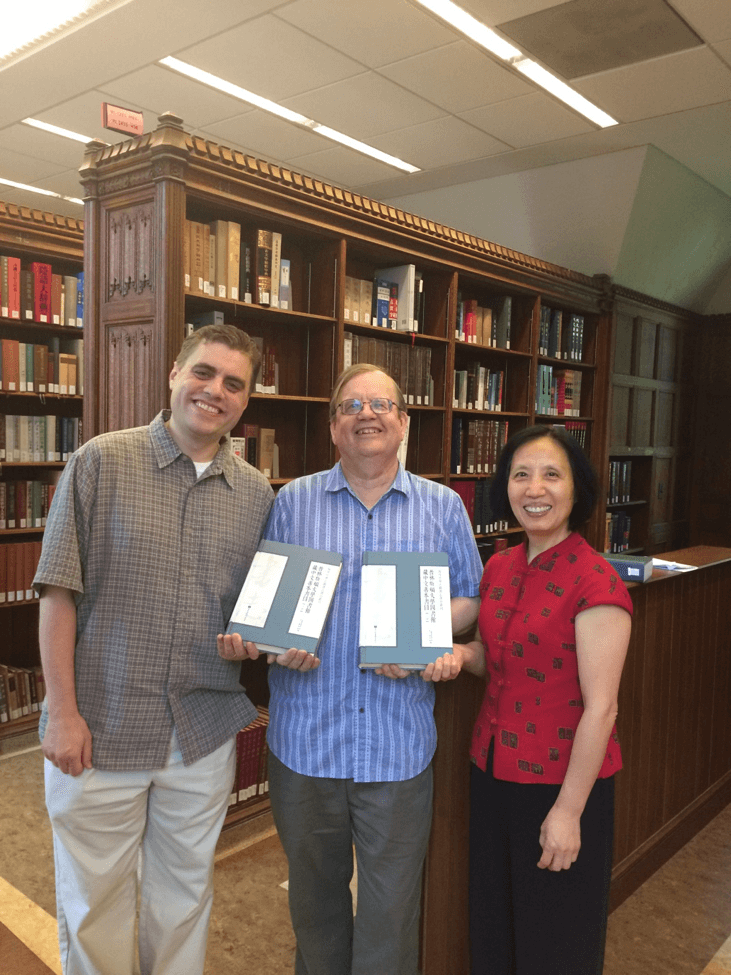 The 2 volumes (1134 pages, 2261 entries; published by the National Library of China Press in their “Series of Overseas Chinese Ancient Book Catalogs”) are the culmination of a final concentrated effort from July to October 2016 by various staff members within and without the East Asian Library. There is a wide demand in China for printed catalogs of this kind.

The core of the volumes describes rare books in the world-famous Gest Collection, collected mainly between 1928 and 1936, and held at Princeton since 1937. Since then, at various points in time up-to-date catalogs exemplary for their time were created, including the printed “Qu” (Qu Wanli) and “Chang” (Chang Bide) catalogs. An introduction in this new catalog gives an account of this earlier history of cataloging. However, criteria for in- or exclusion in the former catalogs were rather vague, the distinction between them was subjective (the Qu catalog ostensibly containing “rare books”, the Chang one “ancient books”), and call numbers were lacking or outdated. Value judgements resulted in the fact that certain “non-serious” works, such as those on divination or physiognomy could be excluded, even if they were unique.

The record creation for this new catalog can be said to have started with the RLG International Union Catalog of Chinese Rare Books Project, organized to bridge the realms of traditional Chinese rare book scholarship and library computer technology. Officially launched in September 1991, its central editorial office was located at Princeton and headed by Sören Edgren until 2011. The project established guidelines for the creation of machine-readable records for Chinese rare books, and the vast majority of the records in the new catalog go back to this project. The project also adopted a new strictly temporal definition for “rare books”: books published until the end of the Qianlong period (1736-1796), and this new catalog has also adopted this definition.

An important difference of this new publication with the earlier catalogs is that all Chinese rare books held in Princeton are included, not only those of the original Gest Collection: thus also those in the Cotsen Children’s Library, in the Marquand Library of Art and Architecture, in various collections in the Department of Special Collections, and also those in the East Asian Library which do not belong to the original Gest Collection. As a result, more than 200 items were newly cataloged for this work in 2016.

Another new aspect of this catalog is that it translates for the first time the hybrid Chinese-English MARC records as created for the CHRB project into human-readable records for Chinese users, resulting in detailed records of a quality as rarely encountered hitherto. Thus, the names of many individuals associated with a work, including where available all writers of prefaces, collators, or even carvers of the woodblocks, are included in these records, providing invaluable information to book historians.

Many individuals helped with these particular volumes. The original agreement between the Princeton University Library and the National Library of China Press resulted from talks between Ma Tai-loi, the previous Director of the East Asian Library at Princeton, and Zhang Zhiqing, a Deputy Director of the National Library of China, and Deputy Director of the Office of China National Center for Preservation and Conservation of Ancient Books. Martin Heijdra directed and oversaw the actual project, going through more than 4,300 records to decide which were to be updated for the present catalog. Cao Shuwen dedicated three months to the cataloging of the 200 new items (and updating countless others). Thomas Ventimiglia was crucial in the process of converting the MARC data into an almost camera-ready Chinese draft. Other staff within and without the EAL were involved in other aspects, including Wenqi Wang, Chen Minjie and Kim Wishart; their supervisors enthusiastically allowed all these employees to devote time to this collaborative project. At the National Library of China Press, Lin Rong guided the process along, despite all kinds of inevitable hurdles, delays and misunderstandings. And final thanks are due to all the users of our collections during the past decades: they taught us to know and appreciate the special joys Chinese rare books can give us. It is hoped that with the publication of this catalog, once again scholars will have access to the latest knowledge accumulated over the years by an impressive array of library professionals.

What remains to be done is to give similar detailed attention to the Chinese works published between 1796 and 1911: Princeton has also thousands of those works, many rare, quite a few unique. However, the reality at Princeton and many other institutions is that such an endeavor would require several years, and more specialists and resources than currently are available; thus that will be a project for the future.

The catalog can be acquired from Amazon China.