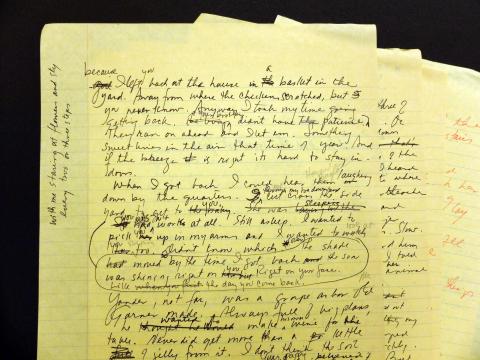 The Princeton University Library is pleased to announce that the major portion of the Toni Morrison Papers (C1491), part of the Library’s permanent collections since 2014, is now open for research. The papers are located in the Manuscripts Division, Department of Special Collections, in the Harvey S. Firestone Memorial Library. They contain more than two hundred linear feet of archival materials that document the life and work of Toni Morrison, Nobel Laureate in Literature (1993) and Robert F. Goheen Professor in the Humanities (Emeritus) at Princeton University. Morrison’s papers were gathered from multiple locations over more than two decades, beginning with the files recovered by the Library’s Preservation Office after the tragic fire that destroyed her home in 1993. Over the past eighteen months, the most significant of the papers have been organized, described, cataloged, and selectively digitized. The papers are described online in a finding aid.

Most important for campus-based and visiting researchers are some fifty linear feet of the author’s manuscripts, drafts, and proofs for the author’s novels The Bluest Eye (1970), Sula (1973), Tar Baby (1981), Beloved (1987), Jazz (1992), Paradise (1997), Love (2003), A Mercy (2008), Home (2012), and God Help the Child (2015). The only exception are materials for Song of Solomon (1977), which are believed lost. In the interest of preservation, by agreement with the author, all of these manuscripts have been digitized in the Library’s Digital Studio. Research access to digital images of Morrison’s manuscripts will be provided in the Special Collections Reading Room. The study of Morrison’s manuscripts illustrates her approach to the craft of writing and help trace the evolution of particular works, from early ideas and preliminary research, to handwritten drafts on legal-size yellow notepads, and finally corrected typescripts and proofs. The early drafts often differ substantially from the published book in wording and organization, and contain deleted passages and sections.

A single yellow notepad may contain a variety of materials, including content related to other works, drafts of letters, inserts for later typed and printed versions, and other unrelated notes. Corrected typescript and printout drafts often show significant revisions. Material from various stages of the publication process is present, including setting copies with copy-editor’s and typesetter’s marks, galleys, page proofs, folded-and-gathered pages (not yet bound), blueline proofs (“confirmation blues”), advance review copies (bound uncorrected proofs), and production/design material with page and dust-jacket samples. In addition to documenting Morrison’s working methods, the papers make it possible to see how books were marketed to the reading public and media, and also to trace the post-publication life of books, as they were translated, repackaged, reprinted, released as talking books, and adapted for film.

Among unexpected discoveries that came to light during archival processing are partial early manuscript drafts for The Bluest Eye and Beloved; and born-digital files on floppy disks, written using old word-processing software, including drafts of Beloved, previously thought to have been lost. Morrison also retained manuscripts and proofs for her plays Dreaming Emmett (1985) and Desdemona (2011); children’s books, in collaboration with her son Slade Morrison; short fiction; speeches, song lyrics; her opera libretto for Margaret Garner, with music by the American composer Richard Danielpour; lectures; and non-fiction writing.

The remaining Morrison Papers are being processed and will be made available for research gradually over the next year, with arrangement and description to be completed by spring 2017. These include her Princeton office files and teaching materials, fan mail, appointment books (sometimes called diaries), photographs, media, juvenilia, memorabilia, and press clippings. Complementing the papers are printed editions of Morrison’s novels and other published books; translations of her works into more than twenty foreign languages; and a selection of annotated books. Morrison’s additional manuscripts and papers will be added over time.