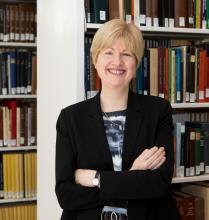 Anne Jarvis has become the inaugural Robert H. Taylor 1930 University Librarian. Princeton's Office of Development formally announced a generous bequest from Robert H. Taylor '30 which establishes the endowed title for the Princeton University Librarian. Taylor, a passionate book collector, has provided more than $71 million in gifts to Princeton, "making him one of the most generous supporters in the University's history."

President Christopher L. Eisgruber said, "Mr. Taylor has made a magnificent contribution to our world-renowned library, enhancing its collections and supporting its overall mission. The personal legacy he has created at his alma mater by including the University in his estate plan will have a tremendous impact on generations of students, scholars, and all who share his love of literature."

"Robert H. Taylor provided decades of generous support to Princeton and the library, and created an abiding legacy in sharing his extraordinary collection with students, faculty, and scholars from around the world," said Anne Jarvis. "It is an honor to be the inaugural Robert H. Taylor 1930 University Librarian."