Delegation from the National Central Library in Taiwan visits PUL 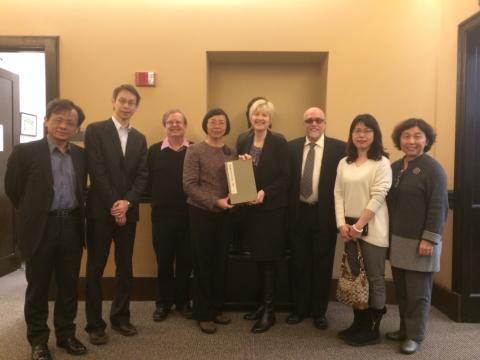 The NCL delegation visited ReCAP to hear in detail about how the consortium runs and operates as a reference for their own proposition to establish a southern branch, shared repository library in Taiwan (ROC). At ReCAP, they met with Ian Bogus, recently appointed Executive Director for ReCAP, and Michael Gibbons, Manager, ReCAP Operations.

Before their ReCAP visit, the delegation toured the East Asian Library, where they met with Anne Jarvis, Robert H. Taylor 1930 University Librarian; David Magier, Assistant University Librarian for Collection Development; and Martin Heijdra, East Asian Library Director, as well as other Library staff members. The Library and the NCL delegation held a ceremony during which the NCL delegation presented Jarvis with gift for the Library: a copy of a facsimile of one of their most prized possessions, the Annotated Poetry of Su Dongpo (Zhu Dongpo xian sheng shi), published more than 800 years ago. The Library in turn presented the NCL delegation with facsimiles of two volumes of the famous Yongle Encyclopedia (Yongle da dian), a 15th-century handwritten encyclopedia in originally 22,000 volumes. Only a few volumes of the encyclopedia survive today, and the NCL currently holds eight in their collections. Additionally, the Library presented the delegation with recent catalogues of the Chinese and Korean rare book holdings of Princeton.