IN SEARCH OF EVIDENCE: an investigator's discovery of critical data 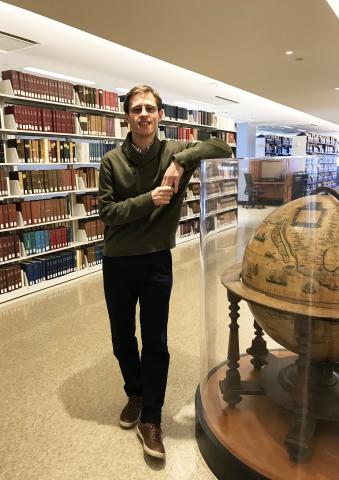 Embarking on a journey of investigation often requires tenacity, vision, and an unquenchable thirst for discovery--especially for those thrilling moments of unexpected findings. Joan Ricart-Huguet, Ph.D. candidate in the Politics Department (pictured left), embodies this spirit of investigation and exudes a dynamic intellect essential to scholarly research. These qualities were in full force while he conducted research at Princeton University Library for his dissertation, Who Governs? Pre-colonial Trade, Colonial Education and Regional Political Inequality.

Animated and charged with energy, Ricart-Huguet described the motivation behind his research. “There’s a lot of work in the social sciences, in political economy especially, showing that political elites—presidents, ministers—tend to favor their home regions disproportionately, especially in developing countries…essentially, more development and welfare for their home regions. But we know next to nothing about why political elites in a country hail from some regions more than others… So, I thought, what if I could study [this] rigorously? Why do these elites come from certain places more than others?”

To explore this question and get at the roots of political power, Ricart-Huguet "leveraged the colonial period in East and West Africa, which rocked existing social and political structures and ended around 1960." He examined how colonialism impacted who was in power and what he terms “regional political inequality” (RPI) after independence. “We often hear this buzzword elite reproduction, but I also wanted to understand elite production, who is in power when independent governments first form.” 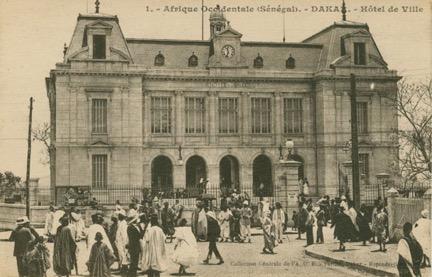 Armed with this central idea, Ricart-Huguet began his quest for information. He knew he would need to “triangulate different data sources.” To test what he had in mind, he needed biographical data on the post-independence political elites, notably their place of birth, as well as data on the colonial period.

Uncertain as to whether the type of data he required even existed, he knew he would need help navigating the vast resources available through the Library. Turning to University librarians and staff specialists, Ricart-Huguet quickly found the support and subject expertise that would make a key difference in his research. “Frankly,” he said, “going in I didn’t know if it was possible to test empirically what I had in mind. I had little clue going in, and…they [the librarians and subject specialists] certainly helped a lot.” He called their support “amazing.” 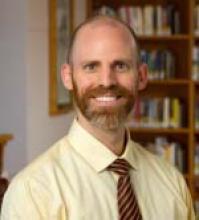 His first stop was to meet with Jeremy Darrington, Politics Librarian. Referring to Darrington as “a master of digging through all the University Library has to offer,” Ricart-Huguet graciously extolled Darrington’s support. “Jeremy was useful in many ways. First, he helped me locate additional data resources, and he facilitated the acquisition of some data from what’s called The World Biographical Information System… It has millions of biographies of elites, not just political but economic, social, in general well-known people for one reason or another.” Through these resources, he began to gather vital information, but he needed more.

Ricart-Huguet dug into the descriptions of materials available through ReCAP (The Research Collections and Preservation Consortium). Jointly owned and operated by Princeton University Library, Columbia University Libraries, and the New York Public Library, ReCAP—located in Princeton—has a preservation repository and resource sharing service for millions of books and other items. Through ReCAP he found “an impressive amount of pertinent colonial records.” 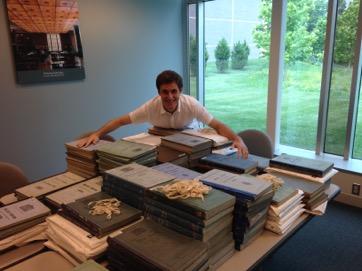 Ricart-Huguet with his research materials at ReCAP. This image shows a number of British colonial records, so-called Blue Books because of the color of their covers.

“I went there,” described Ricart-Huguet, “and I said, ‘I’ve seen that you have many [colonial record books], many of them from the New York Public Library, but right here in Princeton.'” The staff of ReCAP “showed me inside these massive bookshelves with millions of manuscripts preserved at 60 degrees or so and then, basically, we carried these colonial records by the dozens… Just browsing through them and looking for the information…I was there for days.” Ricart-Huguet said that Mike Gibbons, Manager of ReCAP, and other staff there “were phenomenal in making my work easier.”

After many months of research and investigative digging, he was ready for the revealing process of data analysis. But before he could examine how colonialism affected political power after independence, Ricart-Huguet needed to organize what he had gathered into datasets.

He also needed to figure out the best way to leverage his new colonial data visually. For that, he went in search of maps. He wanted “detailed maps from the colonial period to understand how these colonial states were divided, how districts were [formed].” He knew that colonial maps existed, but where would he find them? Did PUL even have this type of map?

At Darrington’s suggestion, Ricart-Huguet went on an excursion to the B Floor of Firestone Library. There he encountered “quite a bit.” The maps he found were original, hard copies from the early 20th century. They included district boundaries which he could then match with the birth location of post-colonial elites. To have original maps in hand was necessary, but he could not conduct his data analysis with hard copy maps. He would need digitization capabilities and GIS (Geospatial Information Systems) expertise to further his research. 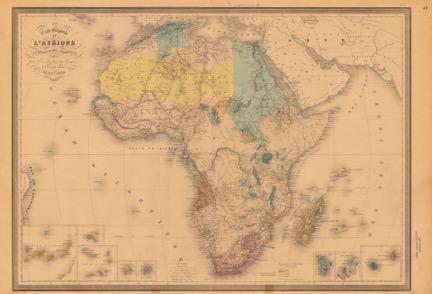 For GIS expertise, there is no one more qualified than T. Wangyal Shawa, the Library’s veteran GIS and Map Librarian. Ricart-Huguet paid him a visit.

“Wangyal,” he said, “[is] always willing to help." Not only does Wangyal know how "to make data more visually appealing," but Ricart-Huguet also appreciated brainstorming with him. "Sometimes just bouncing off ideas when you’ve come into the GIS Center for a different purpose is good, because he’s a smart guy and just talking to him can be fun and useful as well.” 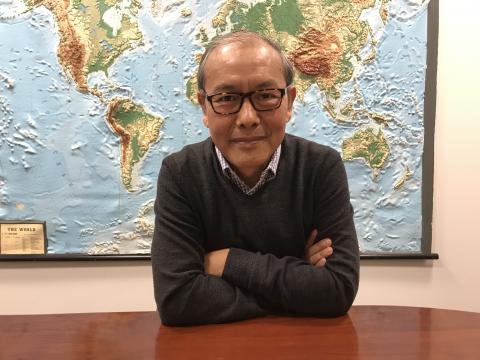 Shawa, who was hired in 1998 to inaugurate a GIS program at the Library, is passionate about geography and cartography. He is even more passionate about sharing his expertise with students and helping them uncover exactly what they need to support their research. “When you show them how they can do it and what options are available, a light just blows up like, ‘Wow!’ They feel really good about learning new things, and you make a lot of difference to them.”

Ricart-Huguet worked with Shawa and his GIS team to digitize the colonial maps he had found at Firestone Library. Developing clear, strong visual presentation of data was important to Ricart-Huguet. “A key part in my dissertation is visualization…I think that, to begin to understand spatial data, plotting it on a map is really helpful. And [Wangyal] helped me think through ways of visualizing that data to make it interesting for a broad audience.”

By bringing these maps to Shawa’s attention, Ricart-Huguet also inspired a new digitization project for the GIS Center: creating digital images of the colonial Africa maps and eventually making them available to scholars worldwide through PUL’s digital library. To date, 75 colonial maps have been digitized; 45 political or tribal boundaries have been geo-referenced and extracted. Shawa continues to process additional colonial maps. 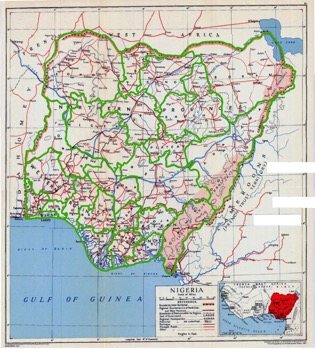 With all of the different pieces of research compiled, Ricart-Huguet began to put them together.

“The best moment,” Ricart-Huguet shared, “is when you realize you can map all of these political elites, born across all these districts of two former empires and then you start zooming in and think, hmm, I wonder why many more come from this district than this other. But you now have a map after all the work you’ve done geo-referencing…you have a picture, now it’s time to explain that picture.”

Using his colonial data, Ricart-Huguet began to see that various measures of development he had collected had little relevance to explain regional political inequality (why some districts had more ministers than others) after independence. However, he realized that political elites seemed to come disproportionately from districts with many teachers and missionaries. “Colonial education, which was unevenly spread, shaped post-colonial politics because recruitment into colonial institutions, like the civil service, depended on education. In other words, education came not only with economic capital but also with political capital.”

Ricart-Huguet’s research journey—from gathering data he wasn’t even sure existed, from finding novel parts in historical arguments, to testing the data, to uncovering colonial maps, to developing key visualizations, to the combining of all these sources that “nobody had put together before”—led him to a place no one had previously found.

“The idea,” he said, “is that early education has this political effect after independence, and actually even today! On the one hand, that more educated districts are more represented in power may be a good thing. On the other hand, colonial rule was severely unequal in each of those colonies. So you can also read those findings as showing that inequalities during the colonial period still manifest themselves in today’s politics. And that is certainly not a good thing because, for example, regional political inequality is linked to violent conflict. Nigeria is an example that follows this historical pattern and is often in the news, but there are many others. My work made me realize that more education is better, sure, but also that how education is distributed across a country is critical for political inequality.”

Additional information about his research and scholarly work is available on Joan Ricart-Huguet's website.