James A. Baker III papers open to all researchers 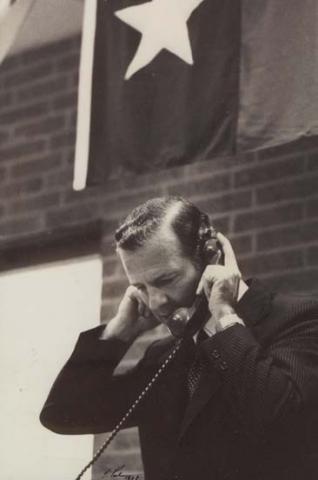 Baker initially intended for the collection to remain closed during his lifetime or until his 100th birthday. However, as of January 1st, 2018, he opened the collection for researchers to access his documents, which span from his early legal career in 1957 to his life post-politics in 2011. “I am very pleased that Secretary Baker has decided to open his collection,” said Dan Linke, University Archivist and Curator of Public Policy Papers, “as scholars of all stripes interested in both domestic and foreign affairs in the 1980s and 1990s will surely benefit from having access to his correspondence, memos, and speeches that document the important role he played.”

At the State Department, Baker oversaw U.S. foreign policy through a significant period in history - the fall of the Berlin Wall, the end of the Cold War, the dissolution of the Soviet Union, the reunification of Germany, and the Gulf War.

In addition to correspondence, memos, and speeches, the collection contains video and audio tapes, handwritten notes, speech transcripts, and other materials related to Baker’s long career, including his 1978 political campaign for Texas Attorney General. It also archives Baker’s work as a key staff member in five consecutive presidential campaigns. However, the papers contain few documentations from Baker’s term as President Bush’s Chief of Staff.

In 2002, Baker remarked that he selected Princeton University as the home for his papers because of the Library’s “well-deserved reputation for organizing, cataloguing and preserving papers related to American foreign policy.”

The papers, stored in 330 boxes and 1 oversize album, opened for research with no restrictions on copying. Interview transcripts within Series 12 and audio cassette tapes in Series 14, however, cannot be accessed without permission of the interviewees.

Learn more about the James A. Baker Papers on Linke’s blog post.