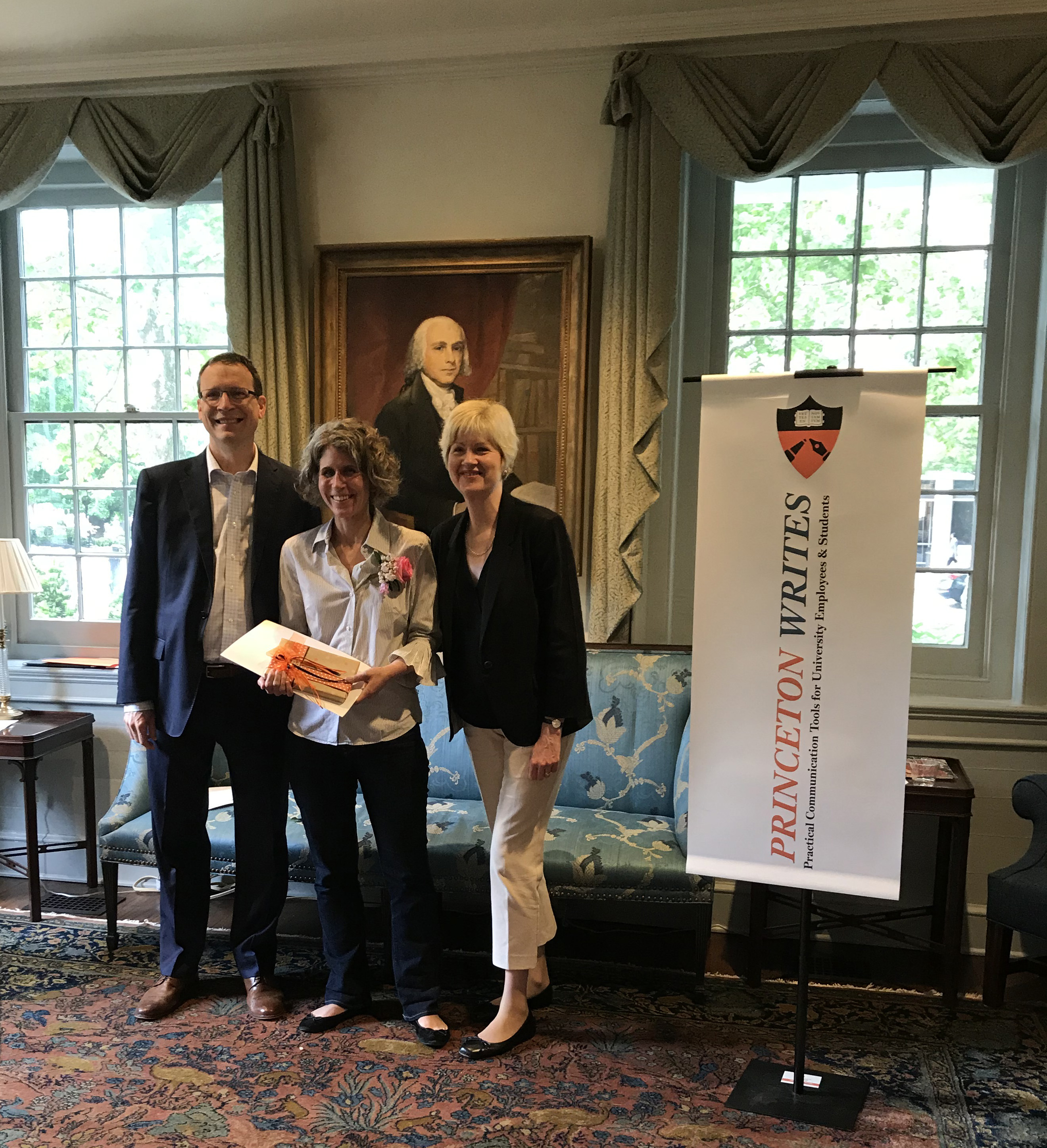 A collaboration with the Office of Alumni Affairs and the Humanities Council, the contest invited staff this year to “describe an encounter or relationship that has given you a new perspective” in 750 to 1,250 words. The initiative draws inspiration from Princeton alumnus, William Zinsser, Class of 1944, who wrote the lauded writing guide, On Writing Well.

The Princeton Writes Prize selection committee awards one winner and three honorable mentions based on "how clearly, creatively, and compellingly" staff address the pre-selected topic and subject of their writing. Sheridan’s essay was selected from a pool of 58 submissions, representing 38 University departments. She and other honorees were recognized at a celebratory reception at Maclean House on June 6 from 3:00 p.m. to 5:00 p.m. In 2015, Sheridan was also awarded an honorable mention for her essay, "5 a.m."

She Still Hasn’t Told Me Her Name

I would like to write about my relationship with my dining room table. It’s alive, you see.

Before, furniture was just furniture. I mean, I liked most of the things in my home. But the relationships were rather utilitarian. I needed to sit. Thus, a couch. Other furnishing relationships consisted of affectionate superficialities: I like the color of those shelves. Or, that rug fits well in this space. Even buying a writing desk was more like purchasing a 19th-century cab horse. Size, confirmation, soundness, all balanced under the almighty god of price range.

Then divorce, which necessitated a new dining room table for myself and my two children. It needed to be inexpensive, and hefty enough to withstand scores of kiddie art projects. But most importantly, it needed to be round. At a round table, there are no sides. Everyone is sitting next to someone. No one is gone.

The task was surprisingly difficult. As I soon learned, seventy-five percent of the world’s tables boast corners. I searched Tiger Trade, Craigslist, eBay, Amazon. In the slivers of time between work and kids, I stopped by thrift stores, secondhand stores, consignment shops. The tables were always too expensive, too tall, too short, too wide, too small, too beat up, and too late, sold.

I started panicking. Which left me dumbfounded. All the changes in my life, and I was panicking about a table? I prodded my anxiety and extracted the cause: my dining room is located in the center of my apartment. And sitting in the center of the dining room? A table, anchoring the world in place, the household drifting around it like a compass needle. Without the right table, I would be unmoored.

Finally, success. I found myself waiting outside a stranger’s home, hopeful. A woman arrived with her two daughters. This had been her mother’s home, she explained. She had recently passed away, and some of her furniture was being sold.

We proceeded into the house, through the living room, and into the kitchen. There. Forty-eight inches in dimeter, single pedestal, solid wood. The table had glitter scattered across its surface (one of the granddaughters recalled the basket of decorative eggs responsible for it). Under the canopy, radiating from that single, sturdy base were four feet, each ending in a curved griffin’s paw. Sold. Sold. Sold. It would be delivered to me that weekend.

I went home and told my kids…that I had just been to a wizard’s workshop and bought a magic table. It had been previously owned by a very accomplished witch. It still had some sparkly spells clinging to the top. I could hardly wait for them to meet it, but cautioned that enchanted tables are alive and we needed to show her (for it was a female table) proper respect.

I honestly don’t know what shocked me more. The sudden arrival of the story from my subconscious, or the fact that a part of me believed every word I was saying.

They say you can take a goldfish, freeze it, thaw it, and it will live again. The end of my marriage was like a goldfish in an ice cube. Numb, brittle, and airless. The divorce was the slow, painful melt as the temperature ticked upwards, rivulets sweating down the sides of the slumping ice.

But the table and her story? That was the first thumping shove of blood into my crystalized chest.

Here was something completely unnecessary, unapologetically whimsical, and ferociously imaginary. It evoked a feeling that existed long before my life was tamped down by marriage, work, family, bills. A time when I believed—really believed—in magic. Suddenly, here was an enchanted table with a history, personality, voice. A friend, arriving during the ugliest, greyest, most grindingly adult period of my entire life. This was not a nostalgic rewarming of my childhood beliefs. This was plunging my hands back into the creative universe, feeling its silky current tugging and playing over my fingers.

Alas, there was still plenty of leg left in the divorce. All told, eleven ragged months of misery I hope never to repeat. At times, I would put my head on the table’s uneven surface and feel her slow breathing. I would stand in the center of my house and borrow her solidity. I would despair and tell her I couldn’t do it, and she would calmly insist I could. She made me believe again.

One mystery, however, remains between the two of us. She still hasn’t told me her name. I respect this decision. In the magical realm, names wield power—a fact that should never be taken lightly. I do know a few things about her autonym. It’s not a name I’ve heard before, it’s not English, and it’s three syllables. One day, I will hear someone utter it, or I will come across it in a book, or it will simply unfold in my mind like reversed origami. It will be a gift she sends the very moment I need it. That’s what our magic is.

For more information about Princeton Writes, visit their website.