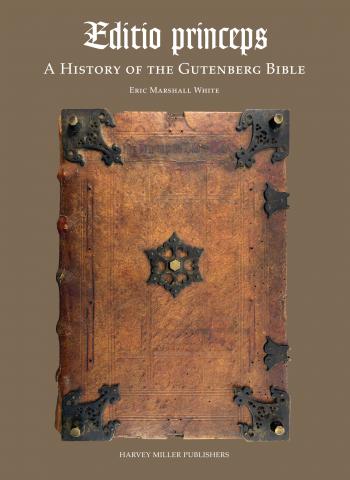 Eric White, PUL's Curator of Rare Books, won the DeLong Book History Prize from the Society for the History of Authorship, Reading and Publishing (SHARP) on July 12, 2018 for his recently published book, "Editio princeps: A History of the Gutenberg Bible" from Harvey Miller Publishers (2017). SHARP annually awards the prize to the "author of the best book on any aspect of the creation, dissemination or uses of script or print published in the previous year."

White’s "pathbreaking" book, "Editio princeps" details an unparalleled historical account of all surviving copies and fragments of the book widely regarded as Europe's first printed book, the Gutenberg Bible. In over three parts covering more than 450 pages, White writes not only the history behind every copy, including PUL's own at Scheide Library, but the book's foundation, effect, eventual decline and rediscovery.

"This book is breathtakingly erudite, combining archival sleuthing on early business and trade practices with traditional scholarship about provenance and printing," SHARP judges commented. "White builds upon and gathers the known facts and myths about the genesis of 'the Gutenberg bible.' The study's tour de force, however, lies in the tracing of ownership history from Mainz in the 15th century to today's libraries and collectors for every single known copy - using each copy's unique binding, illuminations, or marginalia as evidence for geographical movement from place to place. White approaches every extant copy like a crime scene investigation, allowing the features of surviving books to tell a narrative about their individual history. After several hundred years of Gutenberg scholarship, White has in the 21st century suddenly given us so much more, and with his book centuries of disparate and divergent evidence are brought together and re-evaluated. This handsomely-illustrated book is deft of touch and can be read or perused by any reader interested in the world's most famous printed book, while displaying an impressive depth of scholarship. It is a triumphant study."

About "Editio Princeps," Harvey Miller Publishers wrote, “Combining close analysis of material clues within the Bibles themselves with fresh documentary discoveries, the book reconstructs the history of each copy in unprecedented depth,” the publisher described, “from its earliest known context through every change of ownership up to the present day. Along the way it introduces the colorful cast of proud possessors, crafty booksellers, observant travelers, and scholarly librarians who shaped our understanding of Europe’s first printed book. Bringing the ‘biographies’ of all the Gutenberg Bibles together for the first time, this richly illustrated study contextualizes both the historic cultural impact of the 'editio princeps' and its transformation into a world treasure.”

Altogether, White's book was roughly twenty years in the making. Although he first thought of writing a book in 2011, his work and research with the Gutenberg Bible dates back to 1997. "At Princeton, I experienced enthusiasm and support for my research like I had never experienced elsewhere," White said. "I'm truly pleased that the words 'Princeton University Library' are among the first to greet the reader's eyes as they open the book's cover," he said.

For more information on the book, visit the publisher's site.

Scheide Librarian Needham wrote a contribution for the publisher.