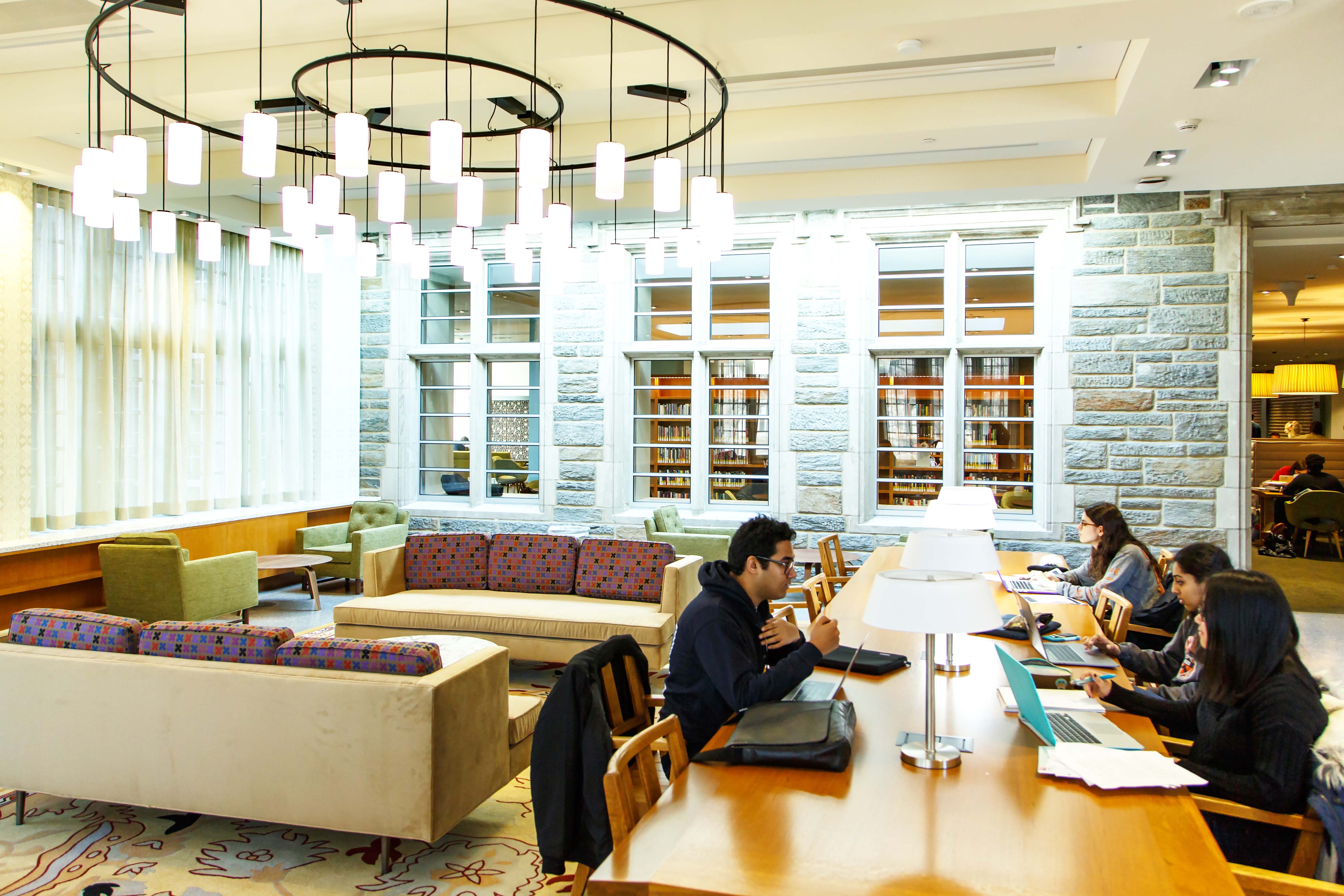 The once dimly lit, labyrinth-like corridors of Firestone Library - known for sending new visitors on Odyssean wanderings - have been transformed into open, easy-to-navigate spaces with natural light and smart, sustainable design features.

The Firestone Library Renovation Project, which began in 2010, is now nearly complete. For the past eight years, extensive work has created a modern facility that gracefully incorporates the iconic characteristics of the original 1948 building. The project goals aim to improve reader and study spaces; upgrade Special Collections areas; introduce sustainable building features; update HVAC, plumbing, electrical and life-safety systems; and renovate graduate study rooms, exhibit spaces and shelving areas in the library, according to the project website.

"The project is now approximately 85 percent complete," said Library Facilities Manager, Margaret Kehrer. "We should be done by the end of the year and ready to celebrate its completion."

Firestone's recent renovations, which improve the navigability and comfort of the library, are completed with a sustainable future in mind. Among the most notable design elements of the project is an emphasis on allowing more natural light to flow into the building. Offices that previously ringed the perimeter of the building were moved inward, allowing for unobstructed views through energy-efficient windows. In what the architect calls "light harvesting," skylights have been strategically added to the first floor spaces.

To make the library easier to navigate, the brightly lit main corridor on each floor has been oriented on a north/south axis with a designated color unique to each floor. For patrons lost among the stacks, this will serve as a compass point. The end panels of the bookshelves facing north are painted a darker shade, while the south end panels are lighter shades.

Further increases to efficiencies and space optimization include the library's bathrooms, equipped with low-flow plumbing fixtures and relocated near the center of the building as part of a "stacked core" design. (Tip: If you're looking for a bathroom, head toward the middle.)

One of the most prominent changes is the library's "intelligent" lighting. As patrons walk down a long row of bookshelves, the lights (a combination of energy-efficient LED and CFL lighting) brighten to illuminate just the portion of the row they're browsing, and then dim down once there is no activity present.

The redesign does, however, according to design architect Fred Fisher, preserve and enhance the "architectural fabric" of Firestone Library, which first opened in 1948. Many of the iconic elements of the original library design have been reused and repurposed, including chandeliers, curtains, tapestries, stonework and flooring, as well as a few of the cherished heavyweight metal study carrels. The drawer faces of the analog card catalog, now retired, have become wall art that greets visitors off the main lobby as they enter the newly opened southeast areas of the library's first floor.

When Firestone opened in 1948, it was the first large American university library constructed after World War II. Today, it is one of the world's foremost research libraries, serving thousands of students, faculty and scholars from around the world. The renovation project is scheduled to be completed by late 2018.