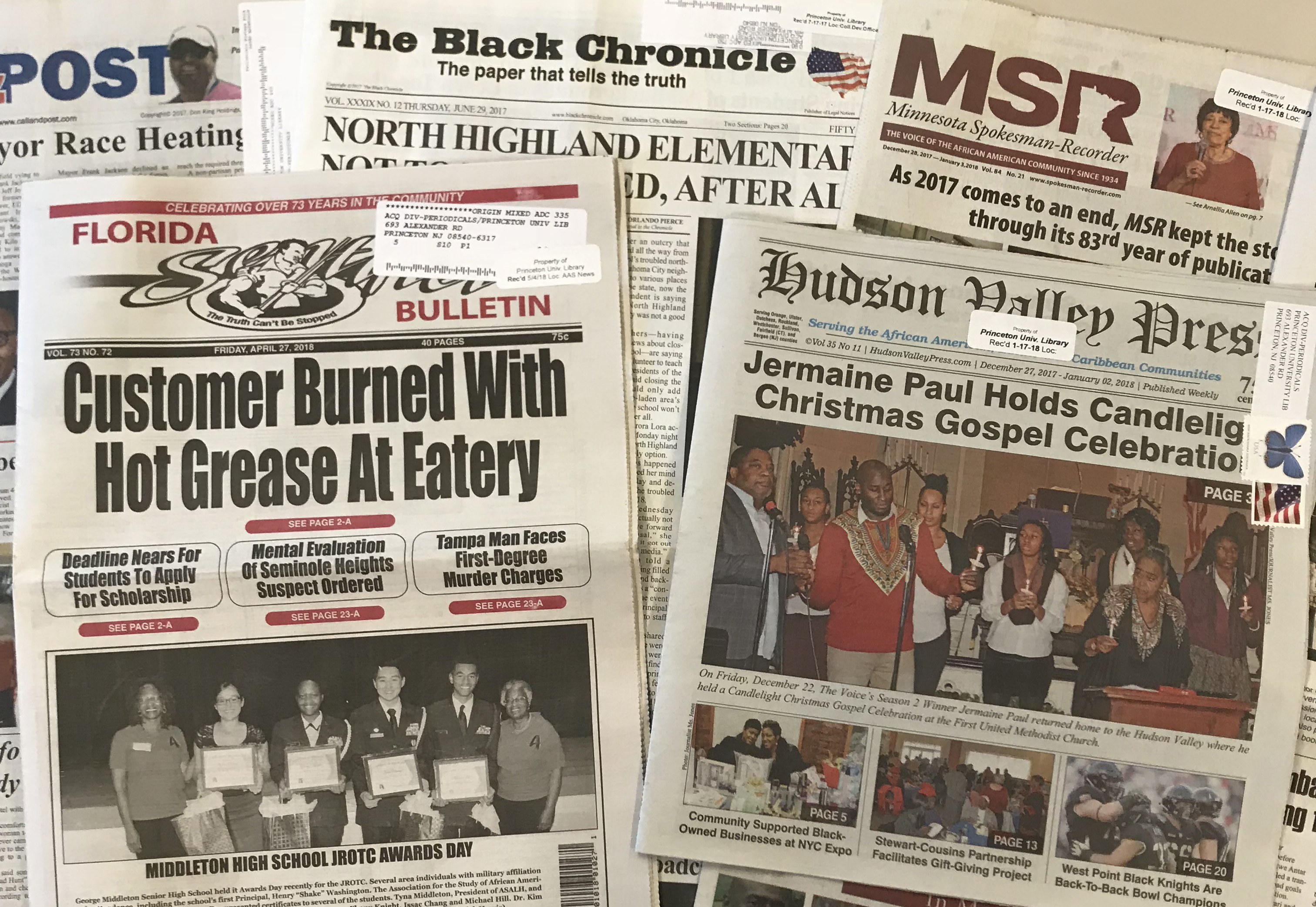 Princeton University Library has begun a nearly comprehensive collection of current newspapers published for African American audiences throughout the United States. It features 72 newspapers from cities and towns in 32 states, ranging from New York City to Eutaw, Alabama. Included in the collection, for example, are Hudson Valley Press from Newburgh, New York; Tuskegee News from Tuskegee, Alabama; Tri-City Voice from Fremont, California; African-American News and Issues from Houston, Texas; and Black Chronicle from Oklahoma City, Oklahoma.

The African American newspaper collection is intended for research purposes; current issues are held for processing for up to a year, after which they are housed in high-density, climate-controlled storage. Researchers may request them from storage and read them in Firestone Library. The earliest available issues date from January 2017.

Collecting newspapers is an important part of PUL's mission to "ensure continuing access to the world's diverse intellectual and cultural heritage," for journalism, in the words of Alan Barth, provides "first rough draft of history." PUL librarians anticipate that future scholars of African American history and culture will be able to make use of the newspapers in our collection to trace the activities, attitudes, and thoughts of people living in United States during the 21st century. As community-oriented newspapers, the titles in our collection provide not only the "hard news" of the day, but coverage of school and church events, opinions of citizens and local politicians, and advertisements that serve to reveal the consumption habits and aspirations of their readers.

A changing publishing environment has made it necessary for libraries to more vigorously collect newspapers. In the 20th century, news publishers often found a robust secondary stream of income as microfilming companies made compact, long-lived copies of the newspapers and sold them on demand to libraries when research needs dictated a purchase. However, the rise of "aggregator" digital databases that gathered news from hundreds of titles led many libraries to drop their microfilm purchases and rely on online news resources. This led to a decline in the fortunes of microfilming companies, which then terminated contracts with many smaller newspapers, leaving many titles unavailable except to current subscribers. Despite their ease of use, the aggregator databases lack both permanence and coverage; titles many be excluded with little notice, and the databases often omit advertising and graphical content.

To provide a permanent record of African American communities, in its full context, it is necessary to collect and preserve newspapers in their entirety. Because we are using standard archival methods, we expect the newspapers to last in usable condition for many decades.