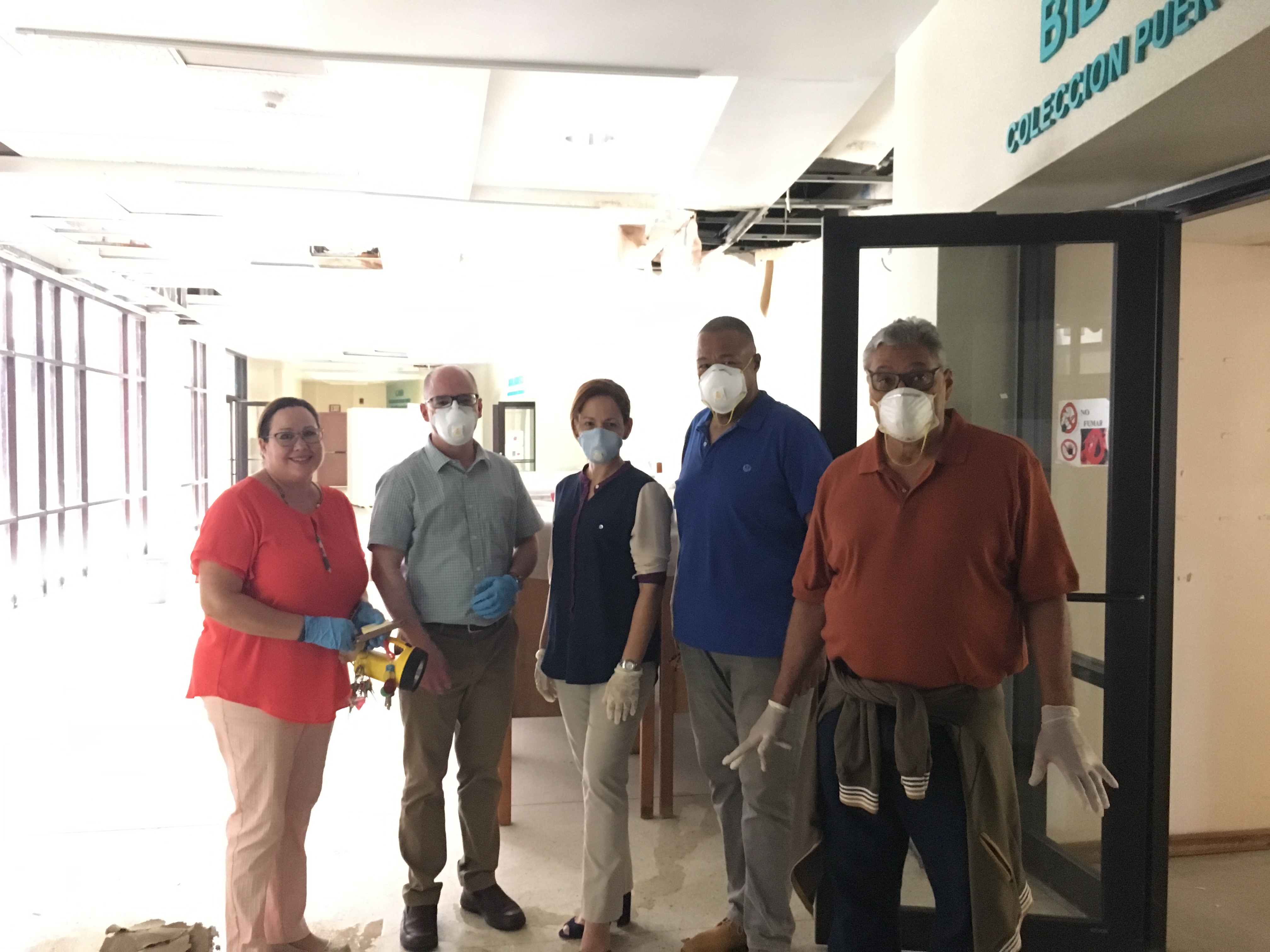 On September 20, 2017, Hurricane Maria made landfall in Puerto Rico. From extensive damages on homes and buildings to the longest blackout in the United States' history, the catastrophic storm devastated the island. Nearly a year later, Puerto Ricans are still recovering from the aftermath, and Puerto Rican libraries and archives, in particular, struggle to preserve collections critically endangered by mold and significant water damage.

In the past months, PUL librarians Fernando Acosta-Rodríguez and Brenna Campbell visited the Águedo Mojica Marrero Library at the University of Puerto Rico at Humacao, which archives remarkable collections in Puerto Rican history, to assess the condition and consult on the preservation of materials damaged by the storm.

"What we learned from librarians and faculty in Puerto Rico [shortly after the hurricane]," said Acosta-Rodríguez, PUL's Librarian for Latin American Studies, Latino Studies and Iberian Peninsular Studies, "was that much of the damage to library collections did not occur during the storm, but during the weeks and months that followed. With water leaking profusely and with months without electricity, environmental conditions within library facilities propitiated the rapid growth of mold that damaged library collections and threatened the health of students and library employees. Extensive reference collections were lost. Unique collections of incalculable historical value remain to this date most seriously endangered." 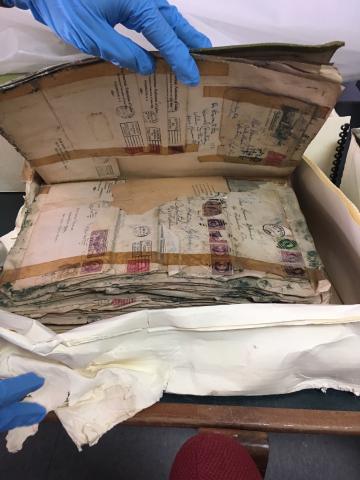 Acosta-Rodríguez and Campbell focused their efforts on stabilizing the most critically damaged archives. Photo by Brenna Campbell, Princeton University Library

At UPR Humacao, Acosta-Rodríguez and Campbell, PUL's Preservation Librarian, focused their efforts on stabilizing the most critically damaged archives, housed in the Library's Centro de Documentación Obrera Santiago Iglesias Pantín (Santiago Iglesias Pantín Workers' Documentation Center). The Center includes unique collections documenting the history of the Puerto Rican labor movement in the 20th century and the movement's connection to the sociopolitical and economic development of the island. It holds the archives of a key figure in the labor movement, and the Center's namesake, Puerto Rican Senator and Resident Commissioner, Santiago Iglesias Pantín. In total, the Center contains more than 1,200 boxes filled with letters, documents, manifests, photos, publications and other materials from the movement.


During their initial visit to the Library in April 2018, the top floor of the building, where the rare collections are housed, remained closed due to substantial damage. "The losses to the roof that occurred during Hurricane Maria mean that collections throughout the Library are at risk of water damage each time it rains," said Campbell. She and Acosta-Rodríguez worked with the UPR Humacao staff to secure the temporary use of two freezers to freeze the documents, preventing further mold growth.

Campbell returned to Puerto Rico in late June to co-teach a two-day seminar, funded by the National Endowment for the Humanities, on Collections Emergency Preparedness and Response with Miriam Centeno, the Collections Care Coordinator at the University of Illinois Urbana-Champaign. While there, BELFOR Property Restoration offered, free of charge, space for the collections in their air-drying facility in Carolina, Puerto Rico and subsquently transported the documents to their facility where they await approval for further cleaning and conservation treatment.

At Princeton, Acosta-Rodríguez, native to Puerto Rico, has worked vigorously to provide additional support to his home island. As a member of the Princeton Task Force on Puerto Rico, he helped establish the Visiting Scholars and Artists from Puerto Rico (VISAPUR) program, which invited scholars, students and artists affected by the aftermath of hurricanes Irma and Maria to the University to continue their work and research on a temporary basis. The initiative, one of the task force's many, was sponsored by the Program in Latin American Studies and the Office of the Provost.

He also co-organized, along with Arcadio Díaz Quiñones, the Emory L. Ford Professor of Spanish, Emeritus, a two-part colloquium titled, "Bankruptcy and Citizenship: Puerto Rico, A 21st Century Colony?" which examined the sociopolitical and human consequences of the Puerto Rican debt crisis in the context of the hurricane.

Going forward, the pair continue to work closely with the UPR Humacao Library staff to develop a plan of action for stabilizing and preserving portions of the most endangered rare archival collections.