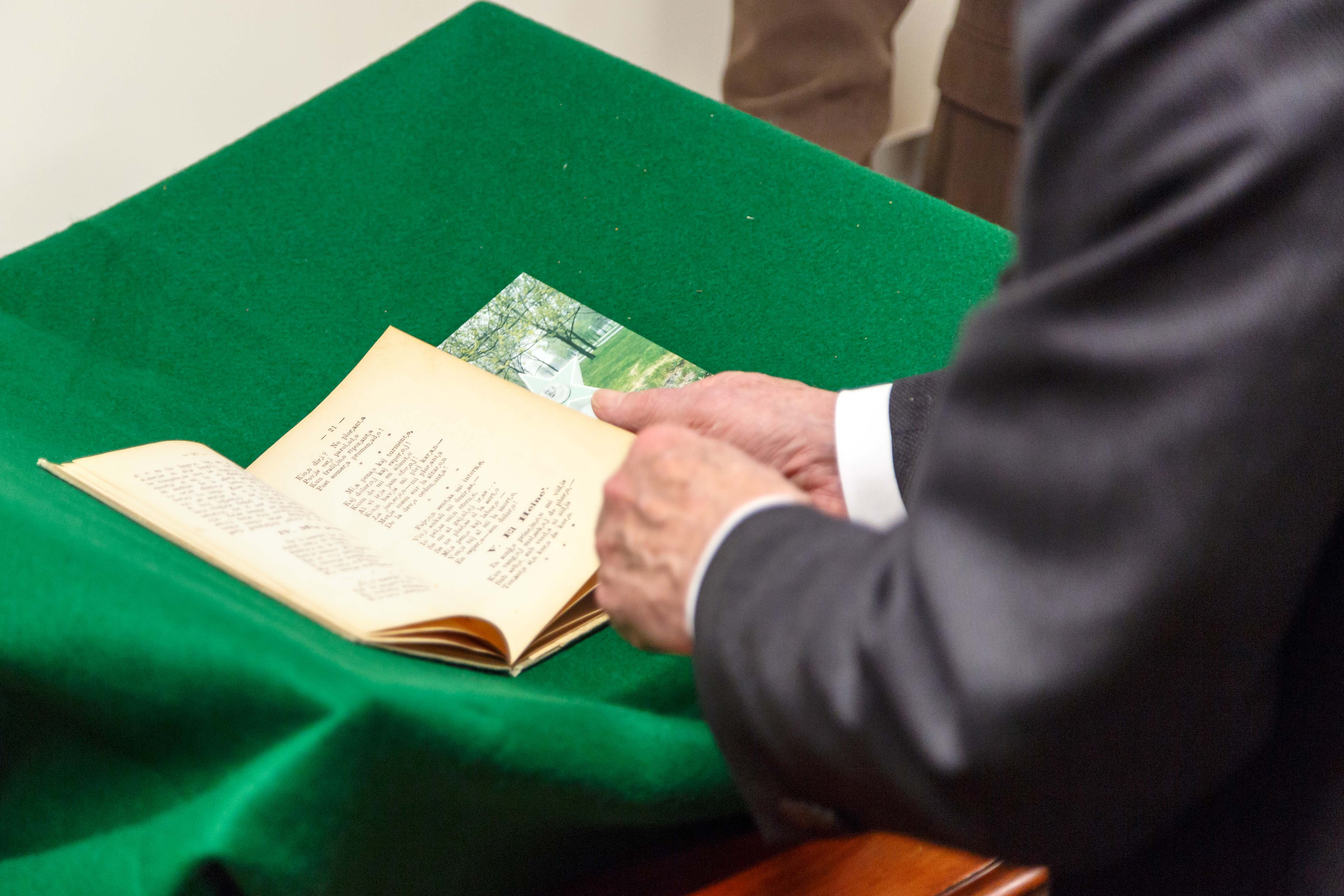 On October 10, faculty and Library staff gathered in Firestone Library to celebrate the gift of a rare book, "Unua Libro," from dedicated Esperantist Humphrey Tonkin to Princeton University Library.

"Unua Libro (First Book),” published in July 1887 and authored by Esperanto’s creator, Ludwik Zamenhof, is the first book ever written about Esperanto. Both an introduction to the language’s origin and ideals and a description of its simple grammar (with examples of both prose and poetry and an appended dictionary of common words), the book first appeared in Russian under the title “Dr. Esperanto's International Language.” Humphrey’s gift is a copy of the first Polish edition, which was issued shortly later in 1887. The book became commonly known as "Unua Libro" only after Zamenhof authored a follow-up in 1888, titled "Dua Libro (Second Book).” Zamenhof reprinted much of "Unua Libro" in "Fundamento de Esperanto (Foundation of Esperanto)” which he published in 1905 as the authoritative grammar of the language.

Due in large part to the activity of its current faculty, Princeton University aspires to be an international center for the study of Esperanto and constructed languages: Prof. Starry Schor (English) is an international authority on Esperanto and the author of its most recent major study, “Bridge of Words: Esperanto and the Dream of a Universal Language” (2016); Profs. Joshua Katz (Classics) and Michael Gordin (History) pursue research in related areas and have co-taught a popular undergraduate course on constructed languages. In support of this teaching and research, the Library has recently increased its acquisition of both current and retrospective titles, some of significant rarity.

Humphrey Tonkin is a distinguished scholar and an international authority on Esperanto, the world’s most successful constructed language. A citizen of both the UK and US and educated at Cambridge and Harvard Universities, he specializes in the literature of the English Renaissance and has served as the president of both Postdam College (1983-1988) and the University of Hartford (1989-2006). He has long been involved with issues of language education and international language problems and justice and is widely recognized as one of the world’s leading proponents of Esperanto, twice serving as the president of the Universal Esperanto Association and among of the founders of both the Akademio Internacia de la Sciencoj San Marino and the Esperantic Studies Foundation.