Inside the Milberg Gallery: Scheide Library 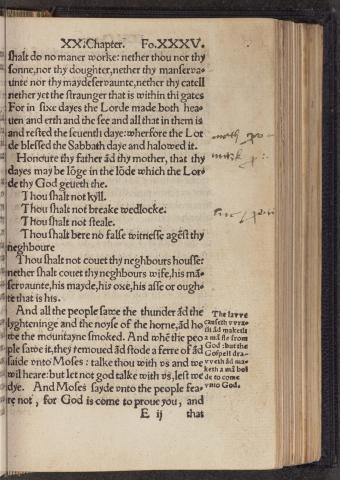 Exodus chapter 20, Ten Commandments: first edition of William Tyndale's translation of the Pentateuch, printed in Antwerp, 1532, to be smuggled into England. An early reader cross-refers to Luke chapter 18, where Jesus commented on the Commandments

This series highlights collections included in the inaugural exhibition, "Welcome Additions: Selected Acquisitions 2012-2018," now open through June 23 (daily, noon to 6 p.m.) in the Ellen and Leonard Milberg Gallery. To follow is a note from Paul Needham, Scheide Librarian:

The foundation volume of the Scheide Library is a modest copy of Michael Faraday’s “Chemical History of a Candle” (1861), which the Philadelphia-born 18-year-old William Taylor Scheide (1847 – 1907) purchased in September 1865, probably in Pittsburgh, where he lived and worked as a telegraph operator. In Pittsburgh, Scheide heard about the incipient boom in oil drilling in northwest Pennsylvania and soon took himself to the oil fields. In the next decades he prospered, developing a pipeline system to transport oil directly to Pittsburgh. Despite his business success, his strongest inclination was for broad reading and historical study. (At the age of 25, he had already acquired a copy of the German Nuremberg Chronicle of 1493.) He retired in his early 40s and, until his death, spent much of his time in European travel and more dedicated to book collecting.

William’s only son John Hinsdale Scheide (1875 – 1942) studied at Princeton, graduating in 1896. John began in the oil business, but soon had to retire due to tuberculosis. He began adding seriously to his father’s library, his spectacular purchases including fine copies of the Gutenberg Bible (1455), the 1462 Mainz Bible, the broadside Declaration of Independence, and the Anglo-Saxon codex known as the Blickling Homilies. 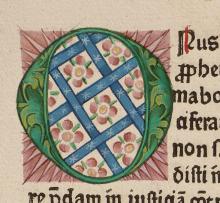 John’s only son William Hurd (Bill) Scheide (1914 – 2014) graduated from Princeton in 1936 and became a music scholar, founder of the Bach Aria Group, and significant donor to many human rights causes. In the early 1950s he began adding great books to the family library, including music manuscripts and, most intensively of all, early European printing. In the late 1950s the library was deposited at Firestone and opened to all scholars. When he died, aged 100, Bill bequeathed his library to Princeton. Its major strengths are early voyages and Americana, the history of the Bible, and the earliest (pre-1470) European printing, this latter being by far the most comprehensive collection in the western hemisphere.


Since Bill’s death his widow, Judith McCartin Scheide, has made a small number of additional acquisitions, on the basis that they are items Bill would have been interested in if he were still alive. A selection of these are presented in the exhibition.