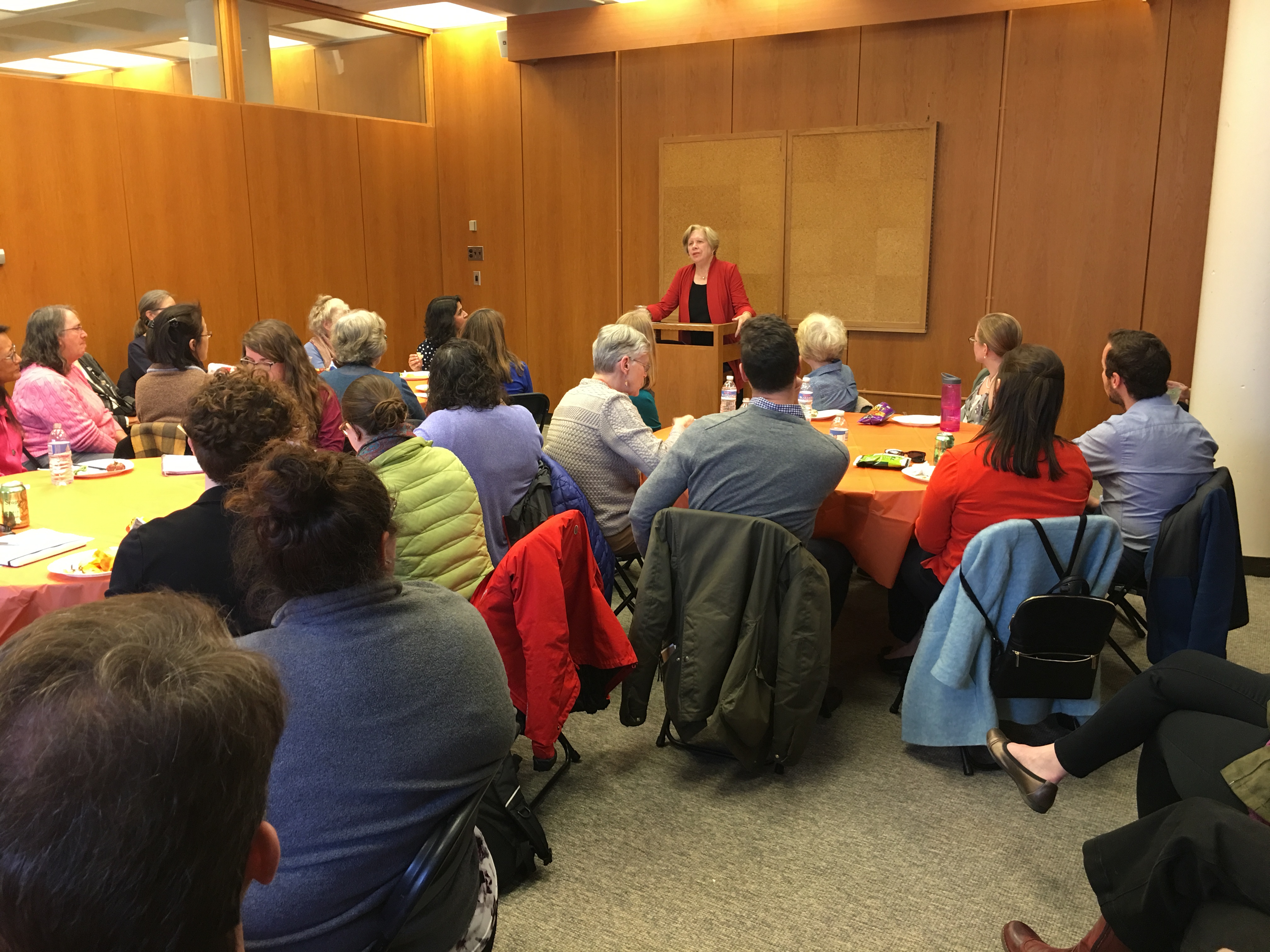 “It would be difficult to overestimate how tough it was to make coeducation happen,” said Nancy Weiss Malkiel, Princeton University professor emeritus in history and author of “Keep the Damned Women Out: The Struggle for Coeducation,” at a lunch and conversation with students, faculty, and staff in Seeley G. Mudd Manuscript Library’s Harlan Room.

Organized in partnership with the Women of Princeton Employee Resource Group, the event, held on Apr. 4, was part of a series in support of Mudd Library’s current exhibition “Redefining Old Nassau: Women and the Shaping of Modern Princeton.” Drawing from the University Archives, the exhibition highlights the contributions, stories, and achievements of women at Princeton.

After an introduction by Mudd Library Special Collections Assistant April C. Armstrong, Malkiel began the conversation with her initial intention for her book: to write a history of coeducation solely at Princeton. Upon discovering that other elite colleges and universities underwent this fundamental change around the same time however, she shifted her focus to include other institutions.

Ultimately, she explained, the decision for coeducation was not a moral matter but rather, “it was about what women could do for previously male institutions.” In essence, top male applicants by then began to show disinterest in attending a single-sex institution, and the universities needed women on campus to recruit male students. Princeton and Yale University, in particular, invited women’s colleges – Sarah Lawrence College and Vassar College, respectively – to move to their campus areas in order to keep women nearby. But when the women’s colleges eventually rejected the offers, the two institutions turned to coeducation. “Women played the instrumental role of improving the educational experience of men,” Malkiel noted.

Still, “I believe that Princeton coeducated more successfully than any of its counterparts,” she said. She explained that several factors contributed to the University’s success, including the quality of the University administration led by President Robert Goheen, the University’s investment and commitment to process (from vetting the decisions by the Board of Trustees twice to consulting with alumni, faculty, and students), and the leadership’s willingness to listen to women.

However she added, “I don’t mean to overplay how well we did. . . we made mistakes.” But, she believes compared to its peers, Princeton was more successful in implementing coeducation and has been working hard since to overcome its shortcomings and make campus a better institution for women.

Towards the end of the event, Malkiel also spoke about conducting research for her book at Mudd Library, home of the University Archives. The University Archives include countless paper and electronic records, photographs, and audiovisual materials that document the history of Princeton. “I’ve worked in many archives over the years,” she commented, “and I can assure you that Mudd is a superb place.” She added that her book was compiled of an enormous array of sources, “which were all at Mudd and then some. I commend Mudd to you as a wonderful place to discover unexpected aspects of the history of this remarkable University.”

This year, Princeton celebrates the 50th anniversary of undergraduate coeducation; the first female undergraduate students were admitted in 1969 to join the class of 1973. Mudd Library’s exhibition in connection with the lunch and conversation not only celebrates Princeton women’s achievements and stories but also provides insights into how they pursued knowledge, claimed space, and supported one another over the past five decades.