Inside the Milberg Gallery: University Archives 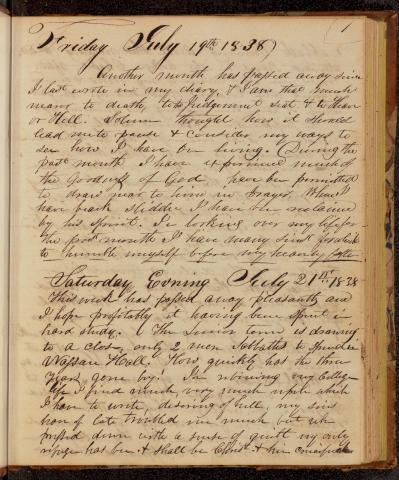 Though only formally established in 1959, the University Archives contains documents dating from the founding of Princeton University, including the Charter of the University and early trustees minutes, through to the present day, with the ongoing additions of electronic records and websites. Collectively, these records detail the administrative, academic, and social history of Princeton University, which, due to its preeminence within the academy, is a focus of many avenues of study.

Though the journal of Robert Sawyer, Class of 1838, primarily documents his time as a Presbyterian missionary in Liberia, it begins with Sawyer's last year as a Princeton student. These entries note his worship with the Princeton African American Presbyterian congregation, documenting heretofore unknown connections between town and gown. The Princeton and Slavery Project used sources like this to understand the nature of racial relations within Princeton in the antebellum period.

The First 100 Days project was a collaboration between the Pace Center for Civic Engagement, the Women's Center, the Princeton University Library, and the Princeton Progressive to document campus activism in response to the 2016 election. The Princeton Advocates for Justice and a coalition of graduate students organized the Rally for a Hate-Free Princeton in response to the posting of anti-Semitic, anti-immigrant, and racist flyers around campus. The photograph above of the rally demonstrates that the University Archives collects material documenting campus life regardless of age.

Housed in the Seeley G. Mudd Manuscript Library, the Archives maintains a robust social media presence through its blog, Facebook and Tumblr pages, and Twitter account.