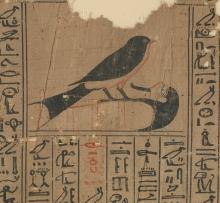 Princeton University Library's Special Collections is pleased to announce that ten Pharaonic rolls, written in Hieroglyphic and Hieratic script either on papyrus or linen, have been digitized and are now available online in the Digital Princeton University Library (DPUL). See the listing below, with links to the digitized manuscripts. These rolls are the oldest part of the Princeton Papyri Collections. Most of them came to Princeton as part of the extensive 1942 gift of Robert Garrett (1875-1961), Class of 1897.


In the late 1920s, Garrett acquired several such rolls, chiefly from the Ptolemaic period (305-30 BCE), in the antiquities trade. He purchased a fully mounted Saite recension of the Book of the Dead in Hieratic, 26th Dynasty, from Spink & Son (London) in 1928. Others were purchased still fully rolled. One of these, a Hieroglyphic Book of the Dead (Pharaonic Roll, no. 5), New Kingdom, 18th/19th Dynasty, was partially examined at the Metropolitan Museum of Art in 1944-48 by Egyptologist and fellow Princetonian William C. Hayes (1903-63), Class of 1924. Five of Garrett’s Pharaonic rolls were finally unrolled and mounted in the Library’s Preservation Office in 1998-99 under the supervision of paper conservator Ted Stanley.

READ MORE on the Manuscripts blog.