Inside the Milberg Gallery: Uniqueness 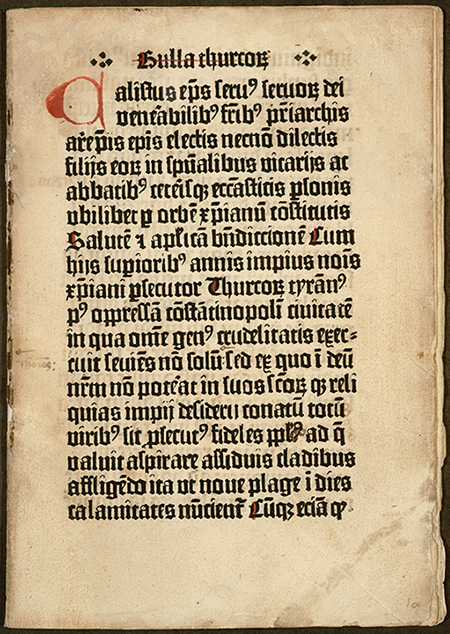 This series highlights collections included in the "Gutenberg & After: Europe's First Printers 1450-1470" exhibition, now open through Dec. 15 (daily, noon to 6 p.m.) in the Ellen and Leonard Milberg Gallery. To follow is a note from Eric White, Curator of Rare Books:

Book historians who focus on the earliest years of European printing are confronted by daunting losses of primary evidence. They have no way of knowing how many editions have disappeared entirely, and often must depend on the random survival of specimens in very low quantities or in fragmentary form. Most of these early printed survivals, in fact, are unique. As evidence of something that is otherwise unknowable, they are invaluable.

“Gutenberg & After” includes several typographic treasures that are truly unique – thus, the item on exhibition represents the only possible means of gaining an understanding of its particular historical significance. Sometimes, the unique survivor is not even complete: for example, all three of the displayed specimens of the Ars minor by Aelius Donatus (the basic Latin grammar for schoolboys) are fragments that represent editions which otherwise would have been entirely lost were it not for their chance survival as recycled material used in early bookbindings.

The Scheide Library’s copy of CALIXTUS III, BULLA THURCORUM [Mainz: Johann Gutenberg, late 1456] is the only surviving copy. Promulgated by the recently elected pope in June 1456, it called for Christian unity by means of prayers to be recited daily across Europe. Soon after the Archbishop of Mainz promoted the bull throughout his archdiocese in late October 1456, Gutenberg used his earliest typeface to print this pamphlet of the Latin text. He also printed a German translation, of which a single copy survives in Berlin. Both unique specimens can be traced back to Erfurt.

The CISIANUS ZU DUTSCHE [Mainz: Johann Gutenberg, ca. 1456], loaned by Cambridge University Library, is the unique surviving specimen of a German mnemonic guide to the major feast days of the church calendar. Probably intended to be posted on a wall for ease of reference, this paper broadside reflects the kind of vernacular wisdom that so often is lost to us. This copy survived only because it was recycled as the pastedown in an early bookbinding. 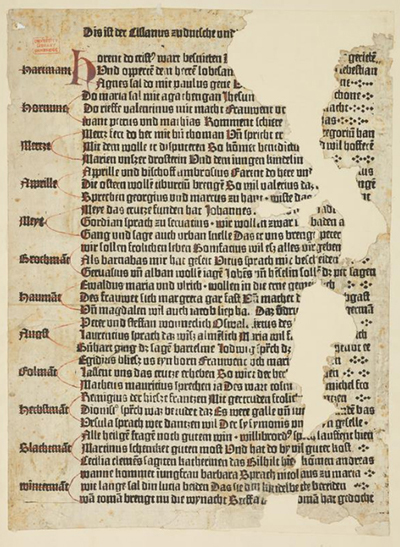 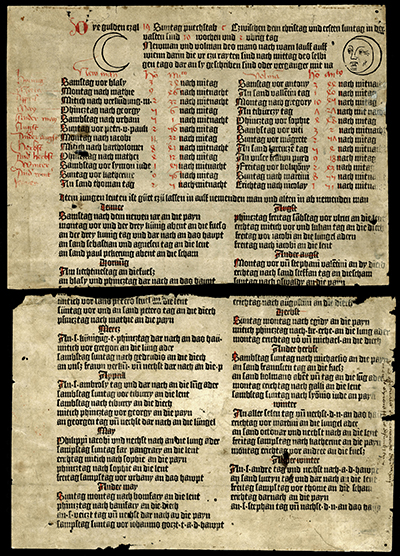 The Scheide Library’s unique BLOODLETTING CALENDAR for 1462 [Vienna: Ulrich Han? late 1461], which survived in two parts as the pastedowns of an early bookbinding, provides evidence of the earliest printing in Austria – two decades earlier than any other evidence. Analysis of the Gothic typeface connects it with other early printing that has been difficult to localize, but which appears to have been produced outside of the first printing centers – Mainz, Strasbourg, and Bamberg – at a very early date.

The PASSIONE DI CRISTO. [Ferrara? Ulrich Han ca. 1462-1463] in the Scheide Library likewise survived in a unique fragmentary copy preserved as binding waste. Largely unknown to broader histories of printing, it represents the earliest printing in Italy, the earliest printing in vernacular Italian, and the earliest example of printed-book illustration outside of Germany. It provides invaluable evidence of this otherwise unknown chapter in the spread of printing across Europe. 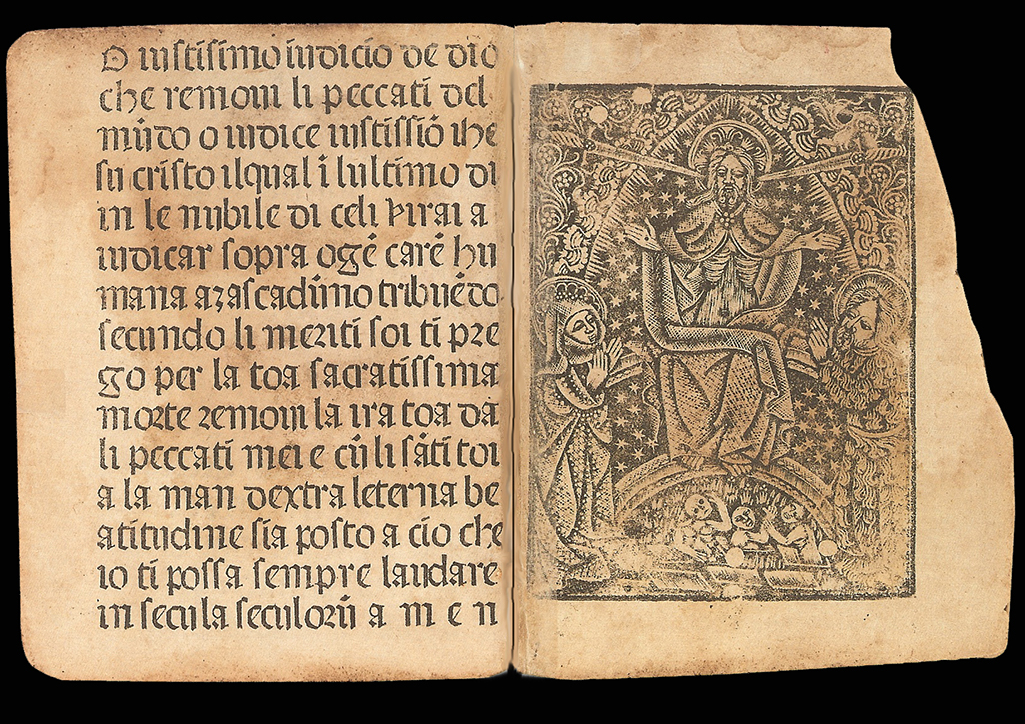 Other items in the exhibition are virtually unique, if not absolutely so. Princeton’s Paris edition of Virgil’s Opera, printed ca 1472, is one of only two surviving copies, and it is the only complete one, uniquely preserving the Aeneid. Others, such as Fust and Schoeffer’s Psalter of 1457, the first dated typographic book, represent the only copy in America. In all, such rarities make “Gutenberg & After” an unprecedented opportunity to examine many of the surviving achievements of Europe’s first printers side by side.