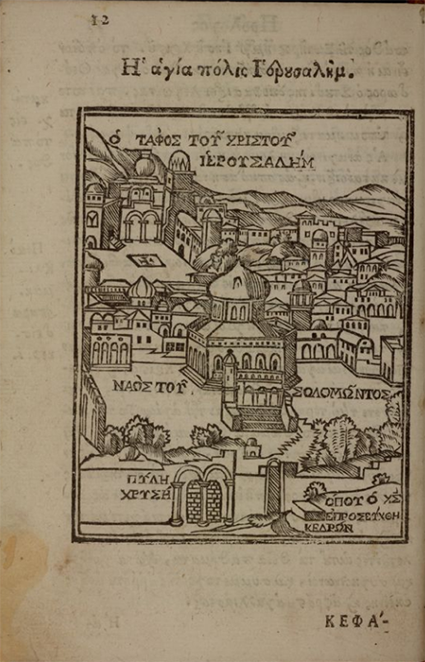 Woodcut of Jerusalem from an early Glykys imprint (1679).

The history of Greek printing is often restricted to a well-known narrative that celebrates the discovery of ancient Greek literature by European scholars during the Renaissance. The printing press made possible the wide diffusion of this literature, whose understanding was deepened by the increased presence of Greek-speaking scholars fleeing Constantinople after its conquest by the Ottoman Turks in 1453. These early editions of the Greek classics are the pride of libraries throughout the world, including Princeton’s, and the printers who produced them, like Aldo Manuzio of Venice, are familiar names to many readers of European history. Nevertheless, the generosity of the Stanley J. Seeger Hellenic Fund has also allowed Princeton to pursue a collection that documents a far lesser-known history: the printing of Greek books, by Greeks, for a Greek-speaking audience.

The fall of Constantinople completed the Ottoman subjugation of the Greek-speaking areas of the former Byzantine Empire, with the notable exceptions of Crete and the Ionian Islands, which remained under Venetian rule. In 1669, Crete too fell to the Ottomans, and a significant diaspora fled primarily to Italy and to Venice, its commercial center.

It is therefore not surprising that it is precisely at this time and place that the history of printing by Greeks for a Greek-speaking audience largely begins. While it is often assumed that the Ottomans banned the printing of Greek books throughout their empire, they in fact only forbid the printing of books in Arabic, due, no doubt, to a complicated mix of social and political factors, but primarily because their religious leaders feared the diffusion of books among their nearly illiterate masses. 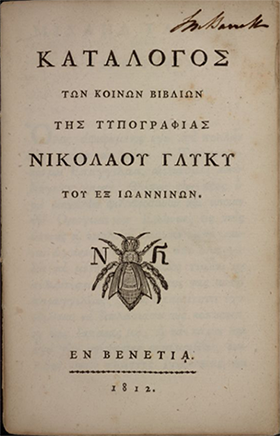 These same forces undermined printing in Greek as well, given that its readership was not only politically and economically subjugated but also largely made up of members of the Orthodox clergy, who, like their Islamic counterparts, were generally suspicious of a wider literacy.

Venice became the center of Greek printing simply because it was one of the very few places where this activity was both commercially and politically viable. In 1644, Nikolaos Glykys (Glee-KEES), a Greek born in the city of Ioannina in western Greece, immigrated to Venice, where he established a commercial enterprise. In 1670, he added a print shop to his holdings, and so began the long dominance of Glykys and his descendants over the business of Greek printing, an ascendency that, with intermittent interruption, would last until Greek independence in 1821.

From the very beginning, the Glykys served a Greek-speaking market, which meant largely a clerical one, and throughout this period, 80-90 percent of their titles were of a liturgical or theological nature, a percentage, however, that fell to 50 percent by the end of the 18th century due to the changing tastes of a larger and more educated readership. In fact, the production of the early-modern Greek printers provides much of the primary evidence for the aspirations and achievements of that readership, which contributed so much to the cultural and political movement known as the Greek Enlightenment of the late 18th and early 19th centuries.

With Seeger support, Princeton has collected a significant number of Glykys imprints, as well as those of their Venetian competitors, Antonio Bortoli, Nikolaos Saros, and Dēmētrios and Panos Theodosiou. 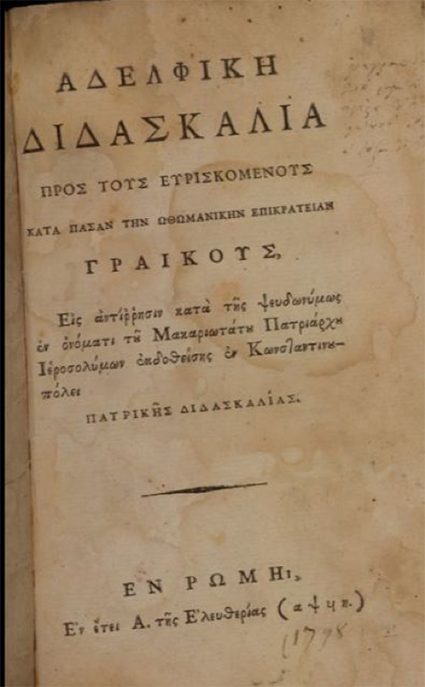 First edition of Koraēs’ first political tract, published anonymously in Paris, not in Rome as the title page declares (1798).

While Venice dominated the production of Greek books, Vienna also became a major center, less beholden to the Church and more open to new currents of thought. Others cities contributed as well: the Patriarchikon Typographeion of Constantinople, Kerkyra (Corfu), Leipzig, and Trieste. Dositheos, the Patriarch of Jerusalem (1641-1707), established print shops in Jassy and Bucharest. Paris is a special case, the home of Adamantios Koraēs, one of the most important figures of the Greek Enlightenment, whose own writings formed the bulk of its production.

In 1886, the French scholar Emile Legrand began publishing his Bibliographie hellénique, in which he described in detail the books published by the early-modern Greeks. His four-volume bibliography and its posthumous supplements, covering the years 1476 to 1799, is one of the foundations of Modern Greek Studies. His long efforts on behalf of this history, often criticized by Greeks still embroiled in the controversy over the use and form of their own language, did win at least some contemporary admiration.

On hearing the news of his death in 1903, a short notice appeared in Athens, in the literary journal Noumas, which might also serve as a tribute to those Greek printers whose work he so faithfully documented:

“His death is a great loss to Hellenism. Legrand was one those chosen few, a foreigner who devoted his entire life to teaching and writing in order to prove to the world that Greece is not only a rich archaeological museum and a vast tomb ‘of ancient glory and ancestral fame’ but a living place that has a present and a future too – if it wants one and if it can manage to ignore for a while its nation-choking teachers and stop being fed by nibbling on the bones of its ancestors.”

For more on early European printing, the "Gutenberg & After: Europe's First Printers 1450-1470" exhibition is open to the public through Dec. 15 (daily, noon to 6 p.m.) in the Ellen and Leonard Milberg Gallery.