Inside the Milberg Gallery: Fragments

Fifteen of the 62 treasures in "Gutenberg & After" survive not as bound books, but rather as binding waste, that is, fragments of early printed books that were recycled as the external coverings, internal linings, or sewing supports of newer books.

Such recycling by bookbinders was the norm in Europe throughout the Middle Ages, and virtually no book, once it fell out of use, was immune to serving as raw material for the binding of a more useful book. 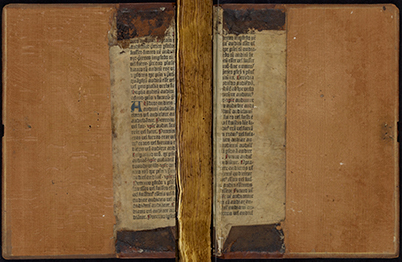 Whereas the practice of repurposing older books as binding waste continued for three centuries into the period of the printing press, peaking during the 17th century, it began to be abandoned in the 18th century, a period of closer attention to the outward appearances of bindings, as well as the emerging antiquarian interest in notable manuscript or typographic fragments as historical objects in their own right.

One of the most significant specimens of printed binding waste ever discovered is the Scheide Library’s vellum fragment of the Ars Minor of Donatus, a Latin schoolbook printed with the same Gothic typeface that was used to print the earliest portions of the Gutenberg Bible, which was probably completed in 1455.

The Donatus was almost certainly printed in Mainz by Johann Gutenberg with the financier Johann Fust, plausibly as early as ca. 1453-54. The Scheide Library fragment was recovered from the binding of a late-1470s book that was bound for one of the monastic libraries of the Austrian Danube valley. 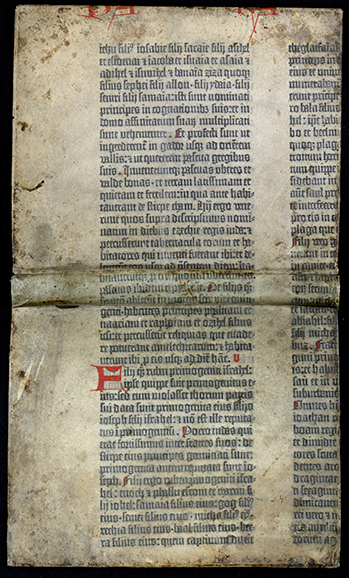 A similar early Donatus fragment, preserved in Cracow, was used in a binding made in Leipzig during the early 1470s. Together, the two fragments suggest that the Mainz printers had organized a significant long-distance trade in printed schoolbooks months or even years before their large Bible was ready for the market.

Another vellum Donatus fragment, printed in a slightly altered later state of Gutenberg’s 42-line Bible types, was discovered by Eric White in 2017, still preserved (but largely hidden) inside the 15th-century German binding of a 1483 Venetian printing of the poetical works of Horace.

Princeton University Library acquired the Horace and performed minor conservation on its binding, revealing that an entire leaf of the lost Donatus remained inside, used to reinforce the attachment of the binding’s wooden boards. Princeton’s unique fragment is the only such specimen that has been left inside the binding where it was found.

Princeton acquired an even more important binding fragment in the same year, a discarded leaf of the Gutenberg Bible that still serves as the vellum cover of the Erneuerte und verbesserte Landes- und Procesz-Ordnung, a legal text published in Cöthen, Germany, in 1666.

This is unmistakeable evidence that the Gutenberg Bible, Europe’s first major typographic achievement, held no significance for 17th-century churchmen and scholars. Having fallen into disuse, the old Latin Bibles were either lost, stored away, or recycled as binding waste. It was not until the 18th century that historians rightly associated the 42-line Bible with Gutenberg and the origins of European printing.

Another important fragmentary survival, lent to the exhibition by the Burke Library at Union Theological Seminary, Columbia University, sheds important light on the earliest arrival of the printing technology in the Netherlands. 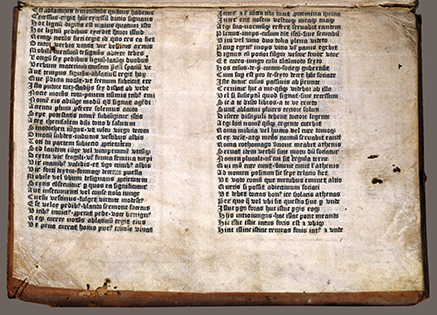 It is a partial vellum leaf from another schoolbook, Alexander de Villa Dei’s Doctrinale, printed in an early Dutch typeface of previously unknown date. As Paul Needham, Princeton University's Scheide Librarian, demonstrated in 1996, its binding context – a manuscript of four separate tracts dated by their Cologne scribe between January and June 1463, which presumably was bound soon after it was finished – strongly suggests that Dutch typography already existed in 1463.

If not for such fragments, we would have no evidence of printing in the Netherlands before the early 1470s. Thus, book history depends not only on the study of documentary records and books that survive relatively intact, but also on the archaeological evidence of fragments left within their early binding contexts.