Now on view at Marquand Library: an exhibition of 18th- and 19th-century depictions of Japanese whales and whaling

Now on view at Marquand Library of Art and Archaeology is an exhibit of 18th- and 19th-century depictions of Japanese whales and whaling in book and handscroll formats. 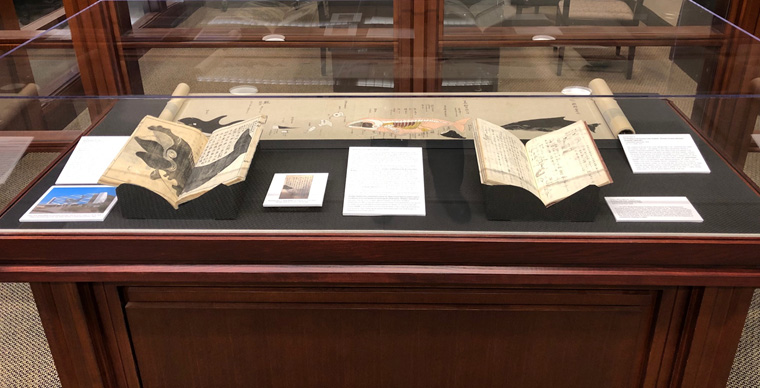 The discovery of whale bones, clay sculptures of whales, and detachable harpoon heads in archaeological digs along the coast of Japan suggests that whaling has been a part of Japanese life from as early as 10,000 BCE. 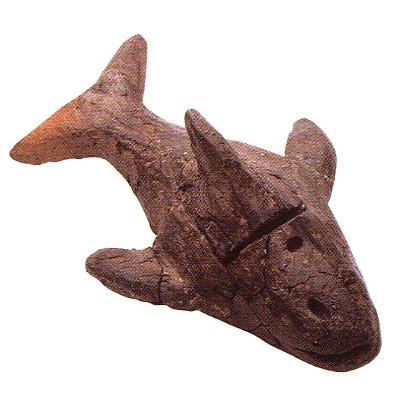 It is not until the beginning of the eighth century, however, that the first written documentation of whale hunting appears in the early chronicle of Japan, the Kojiki [Records of Ancient Matters] (711-712) and in Japan’s oldest poetry collection, Man'yōshū [Collection of Ten Thousand Leaves] (dated before 759 CE).

Although hunted for food and oil, the Japanese people have always seemed to have a nuanced relationship with whales that went beyond the practical to spiritual. Folk tales of the indigenous Ainu people relate that whales stranded on shore were considered gifts from the gods. From the 17th century onward, whales were celebrated in literary tales, woodblock prints, and handscroll paintings, even as whale hunting began to increase dramatically. At the same time, whalers performed ceremonies to ensure that the souls of captured whales could attain Buddhist enlightenment. Memorial rites and luxurious burials (with inscribed headstones) were given for whale fetuses at Buddhist temples and Shinto shrines.

Even the “scientific” book Geishi [About Whales] by Nanki Josuiken in this exhibit is more art than science. While it comprehensively describes and illustrates the 14 species of whale (some now extinct) known in Japan in the 18th century, the engaging images in the book are presented like a Japanese narrative handscroll, with the tips of tails tempting the viewer to turn the page to see the entire animal. The text surrounding many of the images is also reminiscent of a Japanese ehon [picture book] in which beautifully calligraphed poems are carefully juxtaposed with the images to create a unified composition. Also in this book is the first documented suggestion that a whale was a mammal and not a fish! 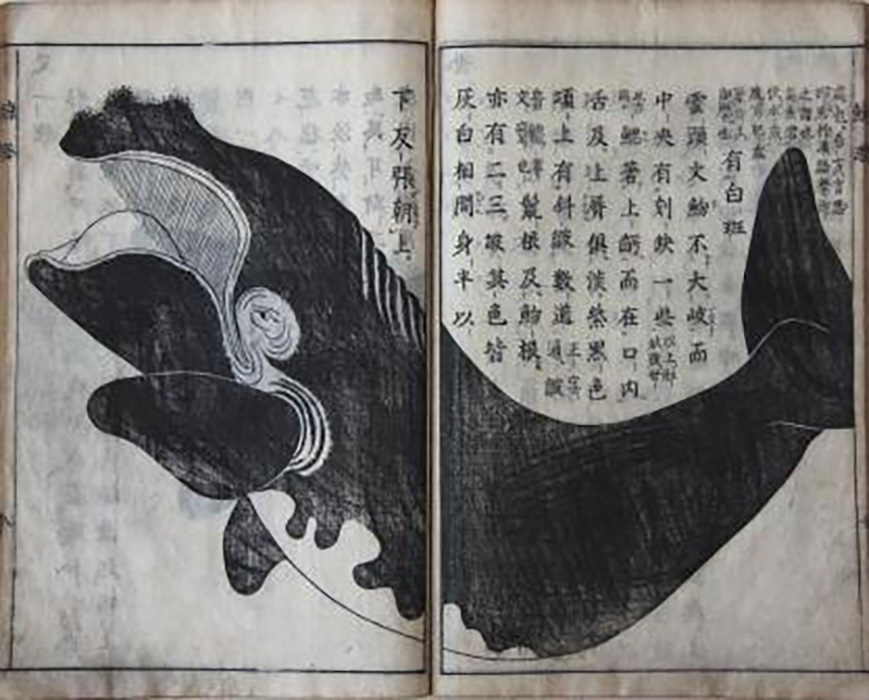 Humpback Whale (zatō kujira). A technique used in Japanese picture books (ehon), viewers (reading from right to left) first encounter a whale's tail, which tempts them to turn the page to see the entire animal.

Little is known about the actual process of hunting whales before the end of the 16th century. Some evidence can be found on bone needle cases made by the Okhostk Culture of northern Japan (fifth to 14th centuries), which are engraved with designs of men in boats using harpoons attached to lines to snag whales. 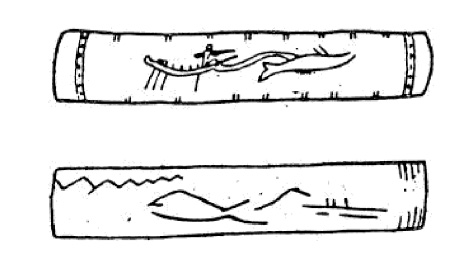 The first written record of Japanese whaling appears in 1570 and describes a similar process of whale hunting around Ise Bay. Organized whaling, however, is believed to have been developed in Taiji in 1606 by Wada Chūbei Yorimoto, a former samurai retainer with pirate connections. Wada’s method, illustrated in this exhibit in the 1890 handscroll, Kumano kozaura kujirakata onyakusho zaikinchū [Treatise on Whaling in the Kozaura Inlet, Kumano], spread throughout Japan during the Edo period (1615-1868) and involved an entire community of people. It began with spotters on the shore using flags and smoke to signal harpoon-wielding men in longboats waiting offshore. The sophisticated signals indicated not only the siting of whales, but their species, their number, and their positions. When caught, a multitude of both men and women processed the whale in a factory-like operation for meat, oil (from chopped bones) and to make a pesticide used on rice paddies. Nothing was wasted. 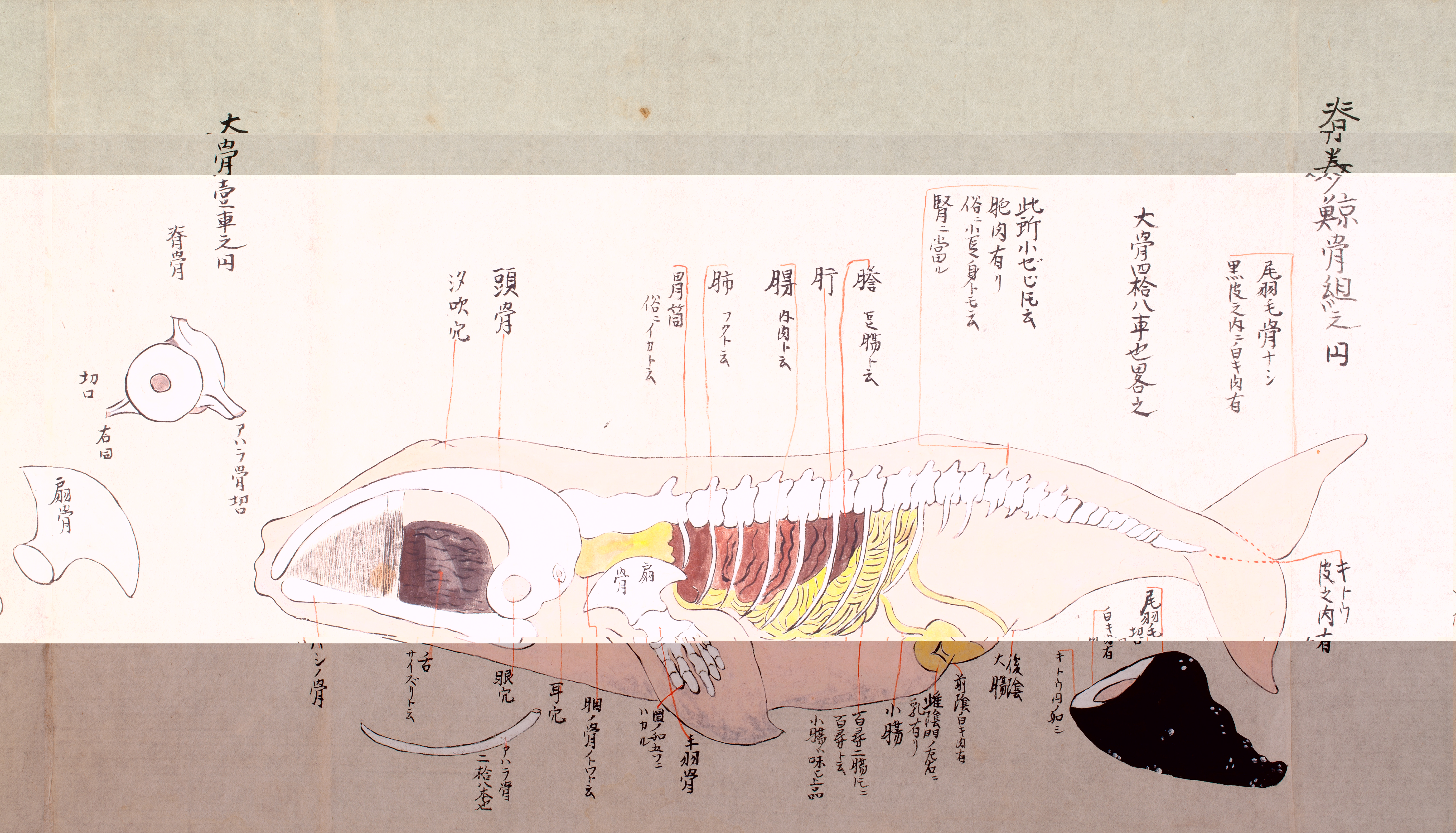 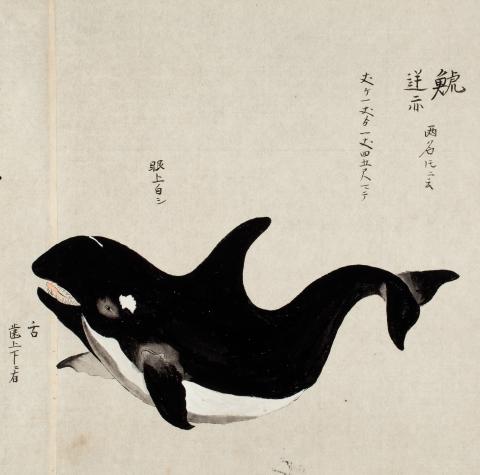 Around 1677, Wada’s grandson, Wada Kakuemon Yoriharu developed a new method of whale hunting using nets that proved to be the beginning of Japanese commercial whaling. Detailed in Niwa Heitarō’s unpublished manuscript, Amiryō hen [Fishing with Nets] (ca. 1893) in the exhibit, this technique was used by Japanese whalers for over two hundred years until modern Western methods of whaling were adopted in the late 19th century.

This exhibit at the Marquand Library of Art and Archaeology will be on view until mid-December 2019.