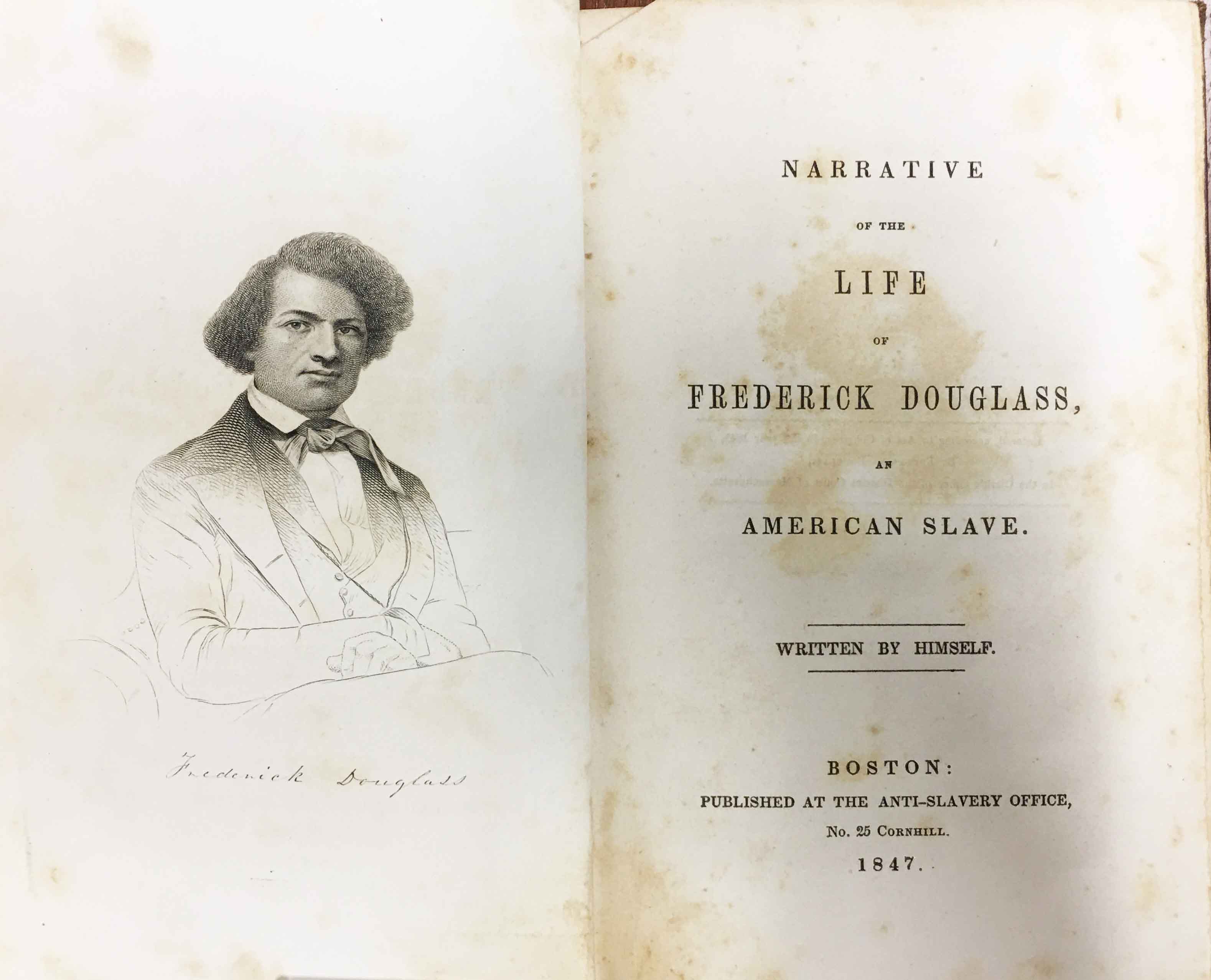 Princeton University Library (PUL) has begun building a collection of early editions of autobiographies from renowned abolitionist, suffragist, and human rights leader Frederick Douglass. Douglass wrote three autobiographies in his lifetime, including Narrative of the Life of Frederick Douglass, an American Slave. Pictured above is an 1847 edition of the book. Photo by Stephanie Ramírez, Princeton University Library

Douglass, an enslaved citizen from Maryland who escaped slavery and later became a leading voice in the anti-slavery movement, wrote three autobiographies in his lifetime: “Narrative of the Live of Frederick Douglass, an American Slave" (1845), “My Bondage and My Freedom” (1855), and “Life and Times of Frederick Douglass” (1881). PUL’s goal, according to history and African American studies librarian Steve Knowlton, is to eventually own copies of each of the early editions produced in Douglass’s lifetime.

PUL currently owns six: an 1855 copy of “My Bondage and My Freedom,” published in New York, and five editions of the “Narrative of the Life of Frederick Douglass, an American Slave,” 1845, 1846 and 1847 editions published in Boston, Massachusetts, an 1845 edition published in Dublin, Ireland, and an 1848 edition Douglass self-published in Rochester, New York.

Items on the wish list include the first British editions of “Narrative” from 1846 and 1847, later American editions from throughout the 1850s, the first French edition from 1848, and first editions of “Life and Times of Frederick Douglass” in its 1881 version and its 1892 revision.

“By buying these different editions, we’re creating a research opportunity,” Knowlton said. “A scholar of the written word who is armed with the knowledge of the author’s life and the events surrounding the publication of this book can, by comparing different editions, look at differences between editions and do a critical analysis where they uncover changes from edition to edition. The changes may reflect, for instance, the author’s changing of the text in response to challenges in the political situation.”

“One of the advantages,” Knowlton said, “is you get to see the book as Douglass and his publisher envisioned.”

In the last two years, Knowlton purchased three copies using funds from the Hurlbut Barnes Cutting Memorial Fund; PUL previously owned the 1855 “My Bondage and My Freedom” and 1846 copy of “Narrative of the Life of Frederick Douglass.”

The early edition of “My Bondage and My Freedom,” in particular, was donated to Special Collections as part of the John Shaw Pierson Civil War Collection. The collection, donated to PUL by 1840 Princeton alumnus John Shaw Pierson, focuses on the American Civil War and contains material such as personal narratives from enslaved people, military operations, regimental histories, and sociopolitical and economic phases from across the United States and in Mexico, Canada, and Europe.

To learn more and/or study the collection, contact Special Collections.