Inside the Hellenic Collections: Maps 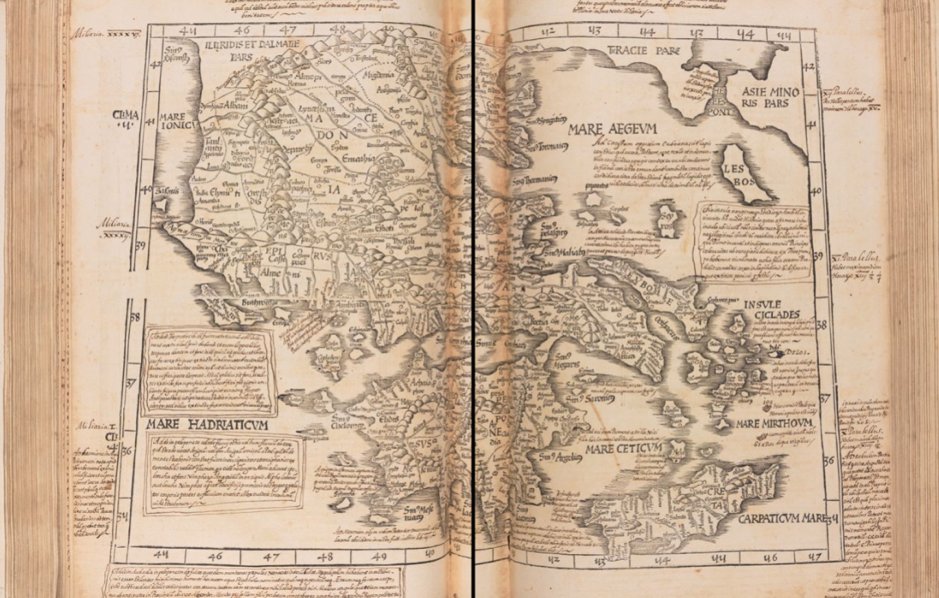 Princeton’s Hellenic Studies collections are renowned for their breadth and depth and for the variety of their material formats. In addition to its support of the purchase of thousands of books and manuscripts, the Stanley J. Seeger Hellenic Fund has also contributed to the acquisition of almost 300 maps, which make up a significant portion of Princeton’s online and Historic Maps collections related to the Hellenic world. This collection documents the entire history of early modern cartography and includes examples of all types and from all periods and centers of production up to present day.

The history of Western cartography begins with the works of Ptolemy, a second-century, Greek-speaking native of Alexandria, who wrote widely on mathematics, astronomy, and geography. The first maps printed in Europe were included in editions of his Geographia, of which Princeton owns several. His observations and calculations, both his own and those he borrowed from earlier traditions, formed the basis of early attempts to graphically represent the earth’s land masses. 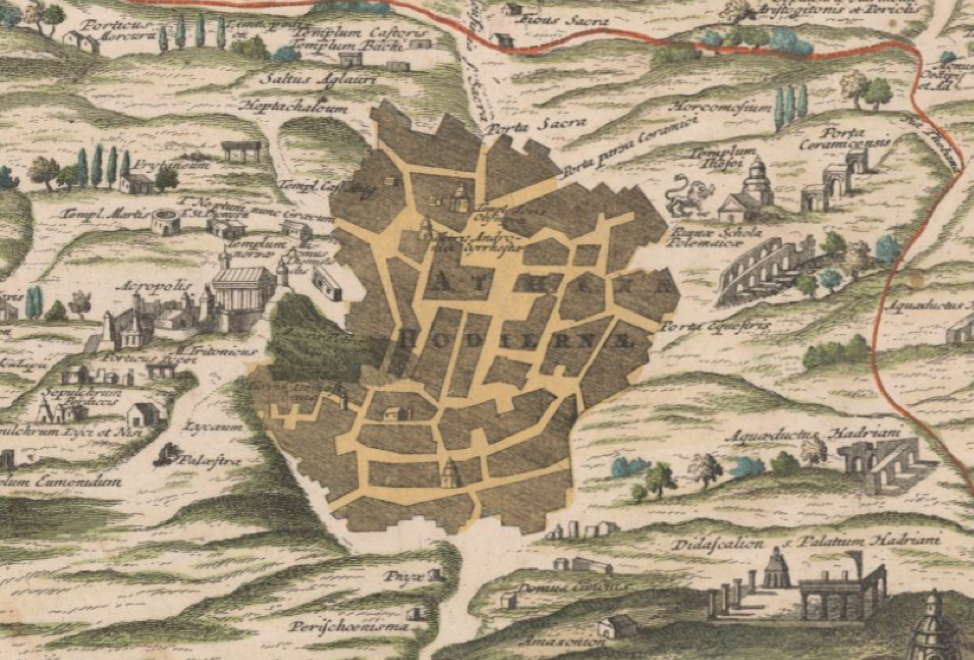 Given the significance of ancient Greece for the European renaissance and the Mediterranean Sea for early modern commerce, it is hardly surprising that the Ballan peninsula and its surrounding islands were the frequent focus of mapmakers. Greece was often depicted to reflect the geography found in its ancient authors, but sometimes these maps were supplemented by more contemporary detail. In the example above, Vincenzo Coronelli of Venice, one of the leading mapmakers of the early 18th century, situates the extent of modern Athens within the context of its ancient ruins. (Coronelli’s work is well represented in Princeton’s Historic Maps collection.)

Works that focused on the islands of Mediterranean, known under the title of “Isolario,” flourished in the 15th and 16th centuries and included both maps and island lore. The Stanley J. Seeger Fund contributed to the acquisition of an edition, perhaps the most renowned of this type, the Isolario of Benedetto Bordone, printed in Venice in 1534. The navigational challenges posed by the Mediterranean Sea required maps of a more practical character, and Princeton’s collection includes three fine examples of “Portolan charts,” maps inscribed on parchment provided with “windrose lines” used to direct a ship’s course. These maps originated in the 13th century but were common well into the 17th. The Seeger Fund contributed to the acquisition of the example above, in which Sicily can be seen in the upper left corner and the Peloponnese in the bottom left-center. 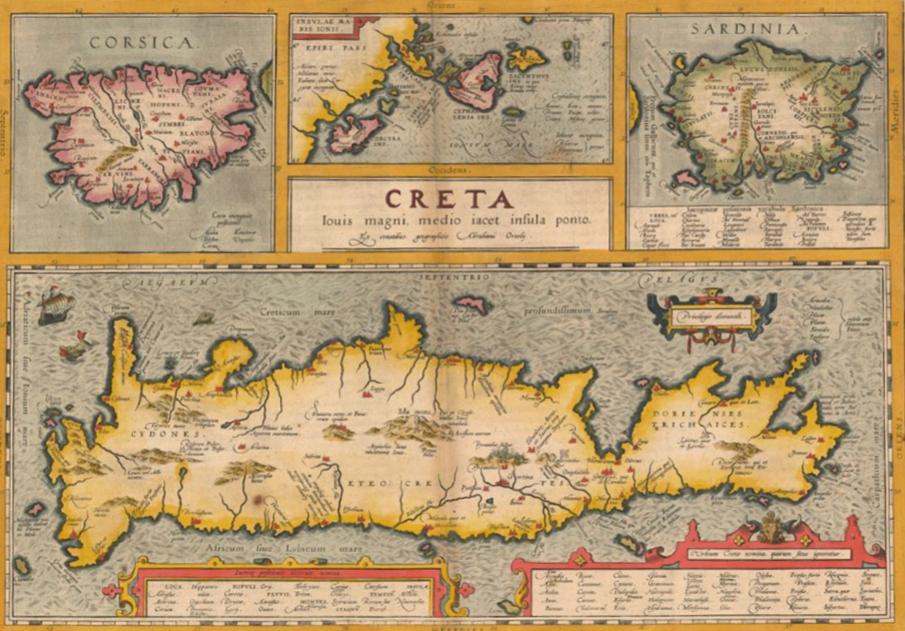 The history of early modern cartography in the West is generally classified by the national schools which gained ascendancy in its practice. The Italians predominated in the 15th and 16th centuries, followed by the Dutch, who led the discipline until the early 18th century. Princeton’s collection includes many Dutch works, those of its two most famous members, Gerhard Mercator and Abraham Ortelius, in particular. Subsequent schools were the German and French, and to a lesser extent, as regards the Hellenic world, the English. The map above is a fine and colorful example of the Dutch school, acquired in 2011 with matching funds provided by the Seeger Fund.

Early modern maps were often accompanied with elaborate decorative elements, including compass roses, ships, sea monsters and landscapes. At times, the map itself was projected in three dimensions, as we see in the stunning example below. 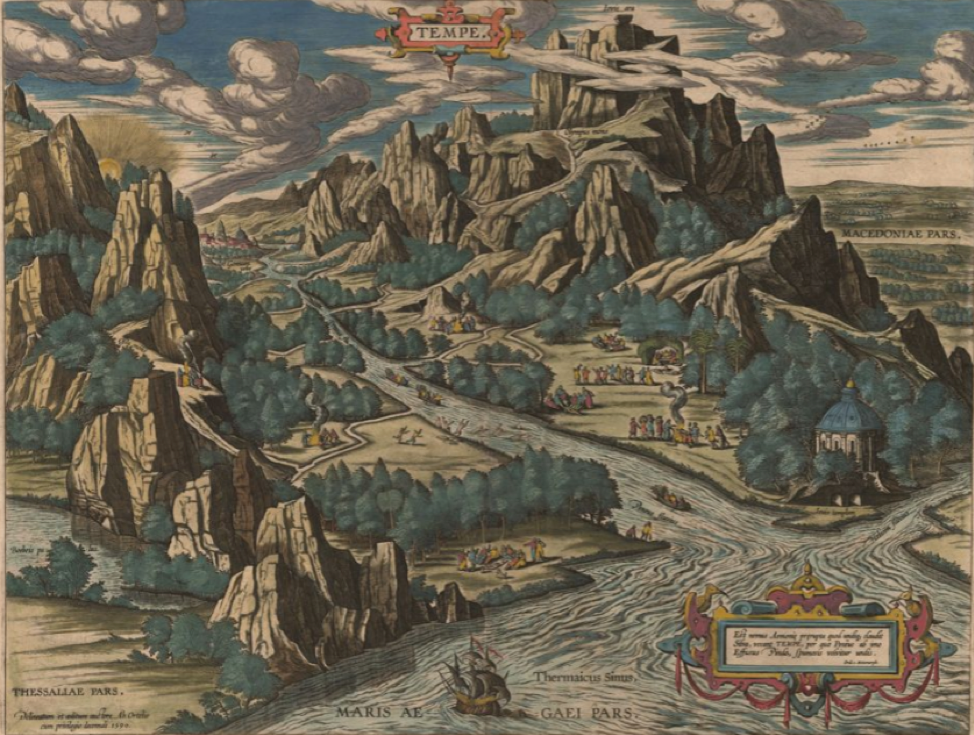 Bird's eye view of the Vale of Tempe at the foot of Mt. Olympus (1609). Photo by Princeton University Library

Finally, the Seeger Fund has allowed us to pursue maps of more recent interest as well, often depicting political, economic and cultural themes relevant to the Hellenic world. 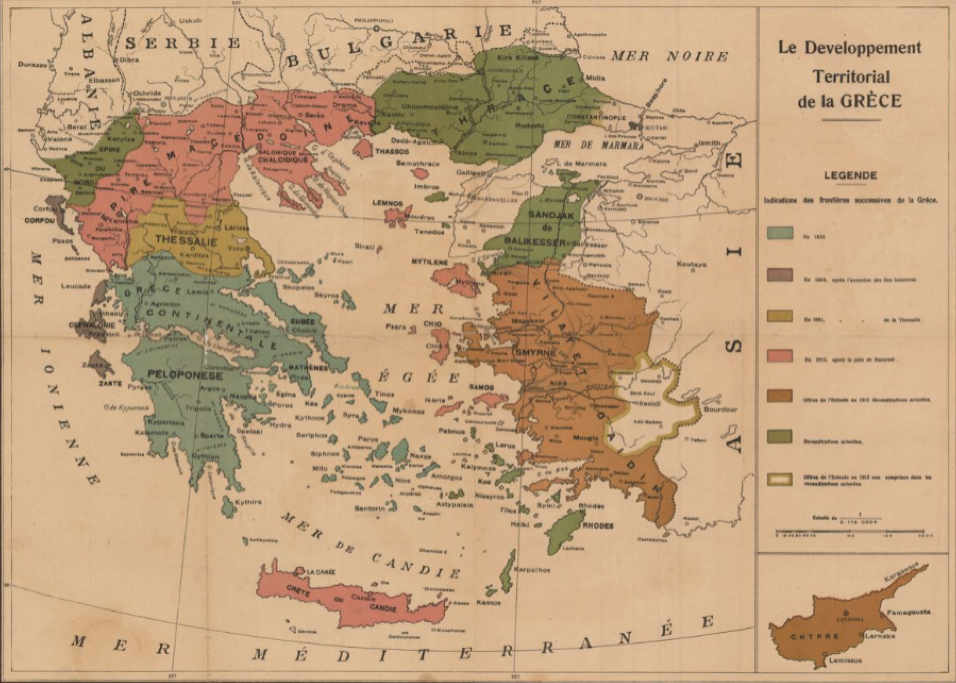 Princeton University Library’s map collection has greatly benefitted from the support of the Seeger Fund, and the Director of the Seeger Center for Hellenic Studies, Dimitri Gondicas, continues to work tirelessly in pursuit of rarities. For a comprehensive listing of the early modern maps of Greece, please see the third edition of A Catalogue of Printed Maps of Greece 1477-1800 by Christos G. Zacharakis.