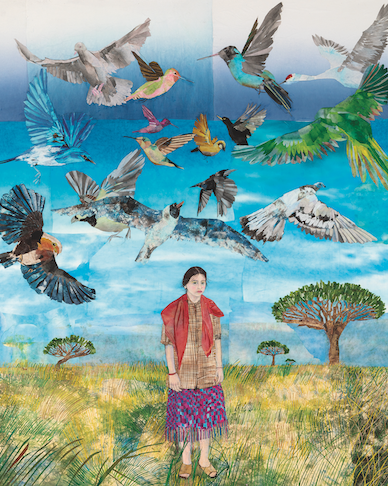 María Berrío builds large-scale collages composed of hundreds of pieces of colored and patterned papers that she cuts and tears and then lays down in layers like brushstrokes of paint. Each blade of grass and bird feather in The Augur is made from an individual piece of paper with which Berrío fashions a subtly textured and modulated surface, adding shadows and delicate details in watercolor, graphite, and ink.

Born in Bogotá, Colombia, and now residing in New York, Berrío commissions handmade papers from artisans in Japan and sources premade papers from locations around the world to build a palette and create compositions that express—in their materials as well as their subjects—the artist’s interest in intercultural connectivity and the patterns of global migration.

Created specifically for the Elfers Reading Room of Firestone Library, The Augur depicts a pensive woman beneath a whirling flock of birds in flight, an impossible mingling of diverse species, each of which has symbolic meaning in different parts of the world—the dove is a sign of peace in Judaism and Christianity; the hummingbird brings luck according to South American traditions; the parrot is associated with the fire and sun in Maya mythology; and the eagle was considered a spiritual messenger in ancient Rome.

Berrío draws inspiration from the tradition of augury, or ornithomancy—a form of prophecy based on interpreting the will of the gods using the songs and flight patterns of birds.

“The practice of augury from ancient Roman religions is an example of the kind of spirituality that inspires me,” Berrío explains. “Alternative forms of knowledge were, and continue to be, practiced by people seeking order, meaning, and hope. I appreciate these beliefs as utterly human attempts to understand life and create its meaning.”

Berrío’s work frequently explores the interdependence of humankind and nature and features figures in moments of transition, narratives she saw as ideally suited to a university campus where students gather from around the world to pursue ideas and work toward future possibilities.

On Thursday, September 17 at 5:30 p.m., Berrío will join Mitra Abbaspour, Haskell Curator of Modern and Contemporary Art, and Holly Hatheway, Head Librarian of Marquand Library of Art and Archaeology, to discuss her influences, her process, and the inspiration she drew from cultural heritage, literary traditions, and the site itself in developing this contemplative scene of a gathering of youth beneath a sky filled with birds in flight. Register here.