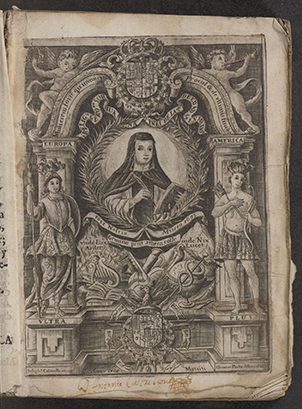 Portrait of Sor Juana Inés de la Cruz (1651–1695) from one of the eight first-edition books donated to the Princeton University Library by Edgar Legaspi, P'18, in memory of Ana Gabriela Valencia de Legaspi in May 2017.

In early summer, Nicole Legnani, assistant professor of Spanish & Portuguese, anticipated a key hurdle in order to teach virtually in fall 2020. Legnani was planning her graduate seminar on colonial Spanish literature and the works of Sor Juana Inéz de la Cruz — the most celebrated female, Spanish-language writer of the 17th century.

Due to public safety restrictions related to the pandemic, Legnani knew the class might not be possible if students could not physically visit Princeton University Library’s Special Collections to examine its rare and exquisite 17th-century editions of Sor Juana’s works.

These materials are only a sampling of items the team prepared over the summer for a wide variety of fall 2020 classes. They digitized over 340 Special Collections items including rare books, manuscripts, photo albums, photographs, posters, scrolls, and artwork. This fall, over two dozen Princeton professors incorporated digitized Special Collections materials into course syllabi and class assignments. 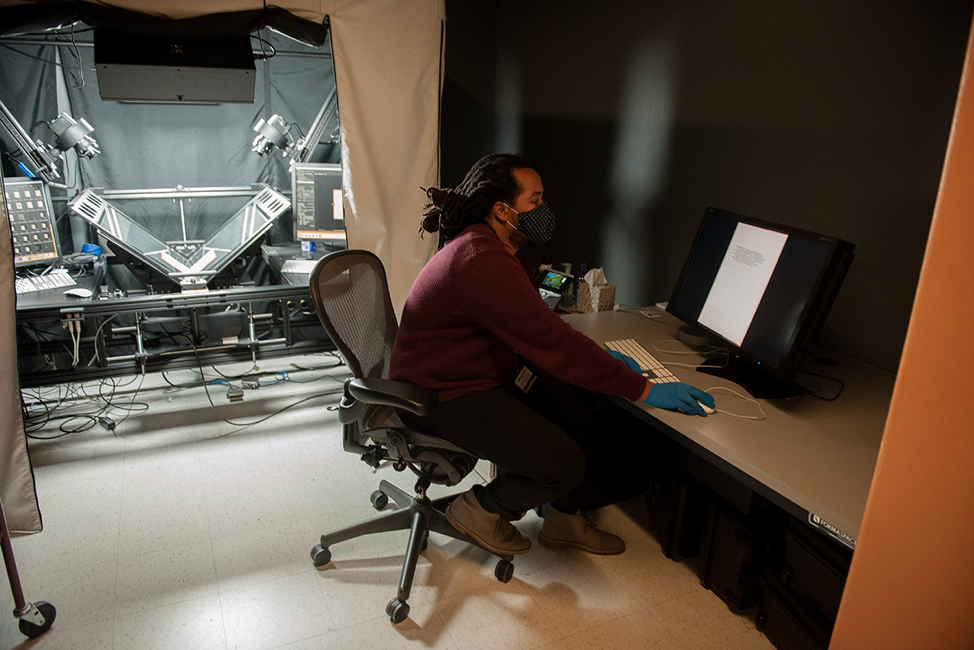 Digital Imaging Technician Will Harris is one of many on the Library’s Imaging Services team digitizing course materials for remote research, teaching, and learning. Photo by Roel Muñoz.

Though unable to teach with the physical books, during the fall semester, Legnani was able to incorporate the digitized course materials into her teaching by offering guided virtual tours to emphasize the quality of paper, specific colors and marginalia (marks made in the margins of books).

Sor Juana, a self-taught poet, philosopher, and dramatist, is widely considered the first feminist of the American hemisphere. “Discovered for her brilliance by Spanish viceroy and virreine to New Spain — the marquises of Mancera — she was encouraged to write, study, and publish at a young age,” said Legnani, a prominent scholar of Sor Juana. 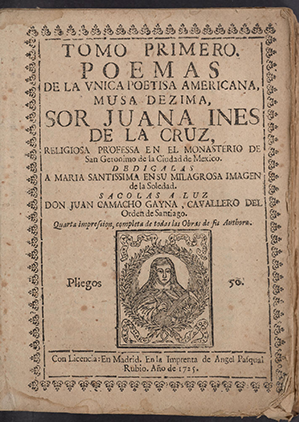 “Following the publication of ‘Inundación castálida’ in Madrid in 1689,” Legnani said, “Sor Juana gained notoriety and fame in the Iberian Peninsula and Spain's colonies in the Americas. Although Sor Juana had already published her religious poetry in New Spain, this first anthology of her works included only her ‘profane’ poetry and cast her, first and foremost, as a poet and a muse.”

“Sor Juana Inés de la Cruz was an extraordinary figure whose importance and relevance has endured over centuries,” said Fernando Acosta-Rodríguez, librarian for Latin American studies, Latino studies and Iberian Peninsular studies. “In the late 20th century, Sor Juana even became a feminist icon and inspiration. Her works and her life have captivated countless scholars. The fascination has also transcended scholarly circles. Her best-known poems and her figure as a whole are part of the popular culture of Mexico and of much of the Spanish-speaking world.”

The University has become well-known to those devoted to her work, termed “Sorjuanistas,” in large part thanks to a gift from Edgar Legaspi, made in memory of his wife Ana Gabriela Valencia de Legaspi. Legaspi was inspired to donate his collection after hearing his daughter Camila Legaspi, a 2018 alumna, recount her powerful experience as an undergraduate working with PUL’s collection of Latin American literary archives for a seminar taught by Rubén Gallo, the Walter S. Carpenter Jr. Professor in Language, Literature and Civilization of Spain, with Ingrid Brioso Rieumont, a graduate student in the Department of Spanish and Portuguese, as preceptor.

“I really want students to think about print culture, what it meant to be published in the 16th and 17th centuries, and how these publications shaped and continue to shape our understanding of colonial Latin America,” Legnani said. “In that era, Sor Juana was the only poet writing in Spanish who had anthologies of poetry published in her lifetime. The first editions at Princeton are really a treasure.”

“Princeton is one of the few places in the world where you can consult so many of the first editions of Sor Juana’s works together in the same place,” Acosta-Rodríguez said. “We are also fortunate to have faculty like Nicole Legnani and Marina Brownlee [the Robert Schirmer Professor of Spanish and Portuguese and Comparative Literature] who know her work well.”

Andy Alfonso, a graduate student in Spanish & Portuguese, said: “Professor Legnani constantly invites us to think through questions of marginalia, media translation, systems of classification, memory practices and processes of identity formation. Every virtual visit to the archive, for us, is about engaging with the material’s afterlife; it’s a matter of revival, reconstruction, and critical speculation.”

Legnani’s seminar examines rhetoric and feminism, freedom and expression, and performances in gender and sexuality in colonial Mexico. The seminar also incorporates a selection of Margo Glantz Papers. Glantz is a Mexican writer, critic, and Sor Juana scholar who came to Princeton in 1994 as a visiting fellow in the Humanities Council.