In 1976, a political prisoner was processed out of South Africa's infamous political prison, Robben Island, at the end of a 12-year sentence. He left his comrades Nelson Mandela, Walter Sisulu, and others behind, still serving life sentences imposed in 1964.

Yet, skillfully hidden in the covers of some of his study materials, the prisoner had copies of both Mandela's memoir manuscript and a number of reflections, by prisoners, on the South African political situation of the time. The Mandela memoir would, just under two decades later, become public in a significantly reworked form as "Long Walk to Freedom," the book that for many people around the world came to define what was, in the 1990s, seen as the South African miracle of a non-violent transition to democracy.

This, and the compilation of essays, are some of the books that the Princeton University Library (PUL) recently received as a donation. The gift of rare and personal books by and about Nelson Mandela, many of which bear the signatures and inscriptions by Mandela and his inner circle, was from Kim Worthington, doctoral candidate in Princeton University’s history department.

Worthington’s dissertation focuses on the history of the secret manuscript produced in Robben Island prison by Nelson Mandela and others, its various iterations over the years, and an ultimate reworking into his 1994 autobiography. Worthington's interest is in the power of narratives to shape both recorded histories and political outcomes, often hiding quite how contested the story of the past can be. As part of her research, she produced 17 oral history interviews with South African leaders and activists closely associated with Mandela and his inner circle.

Worthington wished to find a meaningful long-term home for the books, most of which were personal gifts from the subjects and some of which she was instrumental in creating. With the support of Simon Gikandi, Robert Schirmer Professor of English, who has, both in his writing and personally, had an ongoing engagement with the figure of Mandela, Kim connected with PUL’s Special Collections staff. All agreed that the books have global historical and cultural value, and are an exceptional resource for research and teaching.

After generously donating the books to Princeton, Worthington remarked: “I hope these books and the others that I donated will add to the diversity of Princeton University’s collection. I am sure that all those with an interest in peaceful democratic transitions, and hope after oppression, will be excited to see Mandela’s signature.”

The donated books, all of which may be consulted in the Special Collections Reading Room, include: 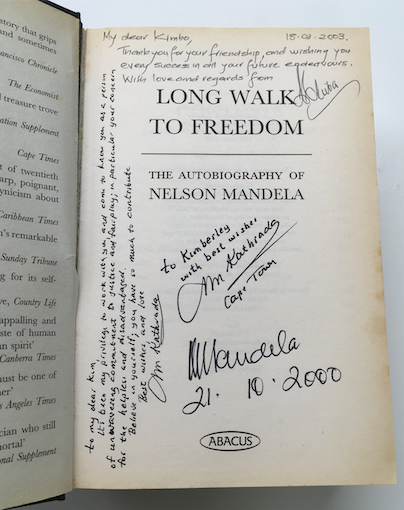 Nelson Mandela's autobiography, signed by Mandela, and likely one of the only copies also signed by his former fellow inmates at Robben Island prison, including Isu Chiba and Ahmed Kathrada.

Nelson Mandela, “Long Walk to Freedom” (London, 1995), signed by Mandela, and “probably one of the only copies” also signed by Mandela’s former fellow inmates at Robben Island prison, including Laloo 'Isu' Chiba and Ahmed Kathrada, said Worthington. The intricate transformation of Mandela’s autobiographical manuscript (secretly written in prison in 1976) into this book is the subject of her dissertation.

Nelson Mandela (et al.), “Reflections in Prison: Voices from the South African Liberation Struggle” (Cape Town, South Africa, 2001), first edition, which preserves for history the thoughts of Mandela, Walter Sisulu, Govan Mbeki, Ahmed Kathrada, and other leaders of the anti-apartheid struggle on the eve of the 1976 Soweto uprising. The book is signed by all of the essay writers, including Mandela, as well as Archbishop Desmond Tutu, with an inscription to Kim Worthington from the editor, Mac Maharaj, a former inmate at Robben Island Prison who, upon his release, had smuggled both the essays and Mandela’s memoir manuscript (later consulted for "Long Walk to Freedom") out of the prison.

Ahmed Kathrada, “No Bread for Mandela: Memoirs of Ahmed Kathrada, Prisoner no. 468/64,” with forewords by Nelson Mandela and Arthur Chaskalson (Lexington, KY, 2011), inscribed by Mandela’s Parliamentary Counselor Ahmed Kathrada, to Kim Worthington, who served as researcher and ghost-writer of the book.

“Mandela: The Authorised Portrait,” with a foreword by Kofi Annan and an introduction by Archbishop Desmond Tutu (Highlands North, South Africa, 2006), inscribed to Kim Worthington by Ahmed Kathrada, one of the editorial consultants, and signed by Nelson Mandela.