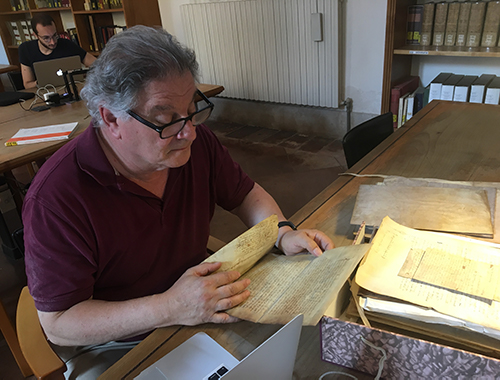 Alan Stahl will return to Venice in 2022 to carry out research funded by the Delmas Foundation Award.

Alan Stahl, curator of numismatics at Princeton University Library (PUL), has been named the first recipient of the Giles Constable Award of the Gladys Krieble Delmas Foundation. The award, which is given to scholars advancing the study of Venice, was initiated in 2021 in memory of one of the longest-serving members of the Foundation’s advisory board, who passed away in January of this year.

“I am extremely honored to be the first recipient of a grant in the name of Giles Constable,” says Stahl. “Not only for his work, which I respect enormously, but for the role he has played in the careers of generations of scholars with his broad range of interests and his unfailing personal encouragement.”

Giles Constable was a historian whose work focused on the Middle Ages and the Byzantine Empire. After teaching at Harvard University and directing research at Dumbarton Oaks Research Library, Constable joined the faculty at the Institute for Advanced Study in Princeton. Best known for his religious and cultural histories of the 12th century, Constable helped shape popular understanding of Peter the Venerable, Byzantium, 12th-century reformation and crusading, and the monastery in Cluny.

The Delmas Foundation began supporting Venetian research efforts in 1977. In the four decades that followed, the foundation would support nearly 1,000 researchers with more than $4.5 million in awards and grants.

The Constable award includes a stipend, which Stahl intends to use to fund two months of archival research in Italy in 2022 on the topic of “Commercial Organization in Late Fourteenth-Century Venice.” This project is a continuation of Stahl’s larger work on “The Nexus of Wealth and Power in Late Medieval Venice,” which began in 2008 and continued with a fellowship from the Delmas Foundation in 2017-18.

Stahl joined Princeton University in 2004 and lectures in the departments of art & archaeology, classics, and history. In addition to teaching, Stahl is involved with developing Firestone Library’s Numismatic Collection, coordinating acquisitions like the recent purchase of 5,280 Byzantine coins from London-based numismatic scholar Peter Donald.