Until recently, Princeton University Library’s (PUL) Special Collections contained a number of family papers and collections documenting the American Revolution, early national period, and the abolitionist movement, yet lacked documentation of women’s experience during this era. Over the past year, PUL acquired several collections that fill this gap and detail a range of women’s issues, from abortion trials to land inheritance.

Special Collections acquired an 1856 diary of a school teacher from Orange, New Jersey whose name, unfortunately, has been lost to time. This diary is of particular interest because it contains not only quite early commentary on women’s rights and the education of girls, but also because it is from a woman who was not well-known as a women’s rights activist at the time. At a time when many women’s diaries document religion, marriage, and traditional women’s household tasks, this one provides a first-person account of a young woman’s frustrations with society’s limits for her. 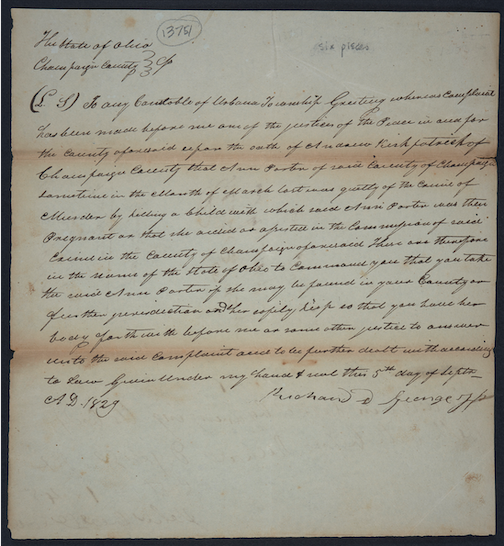 Over time she is increasingly bothered by the content of lectures on gendered behavior and church sermons, and comes to wonder whether she might actually be destined to be a scholar rather than a teacher.

Towards the end of the 1856 school year, she is told that she must find new lodgings as the school administration expressed increasing concern with the content she is teaching to the girls in her class. She writes that when she inquired about new lodging with the women of the town, “they could not give a decided answer until they had consulted with their husbands. I find this is no place for Woman’s Rights 'subjects'.” By the end of March she had left Orange and found new employment at a public school teaching boys.

Another recent addition includes legal documents from the Ohio State trial of Ann Porter for abortion in 1829 such as a warrant for Porter, as well as an affidavit, summons of witnesses, and a document by the Justice of the Peace Richard George summarizing the actions in the case. Porter served prison time for her actions, and these documents illuminate her story.

The Martha Bradstreet Family papers document the life of Martha and the Bradstreet family as they navigated 19th-century life in Antigua, Canada, and the United States. Of particular interest are the records relating to Martha Bradstreet’s legal efforts to regain title to land she inherited from John Bradstreet and Mary Aldrige.

While these small additions to the collection provide insight into the lives of white women in the 19th century, it’s much harder to document the lives of Black, Indigenous, and People of Color (BIPOC) women. Acquiring and documenting the history of BIPOC women is more difficult because of the legacy of colonial control of recordkeeping combined with colonial collecting practices and systemic erasure of BIPOC histories within special collections. 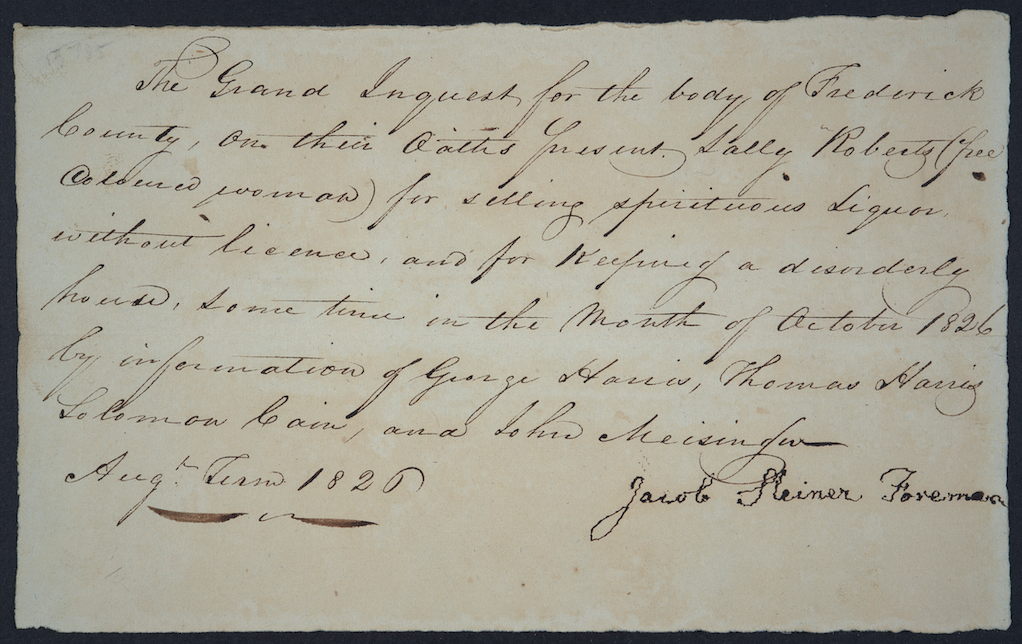 However, we recently acquired one document in which a court in Frederick County, Maryland convicted Sally Roberts, a free Black woman, of selling liquor without a license and running a “disorderly house.”  It’s unclear from the document the exact nature of the “disorderly house,” which could have been an unlicensed tavern, brothel, dance hall, or integrated boarding house that entertained visitors late into the night. What authorities called “disorderly houses,” were often one of the only avenues available to women of color for attaining a degree of economic stability and were potentially sites of celebration and joy in a society and economy that severely constrained opportunities for BIPOC.

PUL plans to continue adding women’s history to our early American history collections and looks forward to working with faculty, students, and researchers who are interested in teaching and researching with these materials.  Hopefully, these collections will provide inspiration and source material for new avenues of research and teaching.