Yours, mine, and hers: Her Book project identifies missing female book ownership in PUL collections

In October 2018, Princeton University Library’s (PUL) Rare Book Working Group examined more than 50 books from the Robert H. Taylor Collection. The selected items dated back to the 17th and 18th centuries and shared a common feature: they were inscribed by women.

That initial committee sparked an idea in Associate Professional Specialist Emma Sarconi’s mind. How many more women were obscured from recognition in PUL’s collections? After participating in the ‘Her Book’ session of the Rare Book Working Group, hosted by Scheide Librarian and Assistant University Librarian for Special Collections Eric White and Librarian for Academic Programs and Curator of American Books and Western Americana Gabriel Swift, Sarconi continued surveying PUL’s collections, discovering and identifying female book owners. 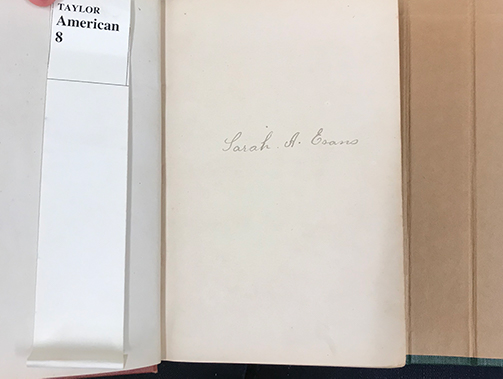 An inscription at the front of Little Women. Image from Emma Sarconi

Sarconi was already attuned to the absences of women and other underrepresented groups in the Library. As an organizer of Princeton’s Archival Silences working group with Associate Professor of English and African American Studies Kinohi Nishikawa, she sought to ignite conversation around the biases that exist in past and present archival practice. “Her Book,” as she explained, “creates an inventory of women’s ownership markings found within Special Collections material in an effort to promote the study of gendered patterns of book ownership at Princeton and afar.”

The first phase of the project kicks off where the Rare Book Working Group left off. The Robert H. Taylor Collection covers a wide range of English literature from the 14th century to the 1940s. Taylor, Class of 1930, was a bibliophile who donated his collection to the University in 1971. He also chaired the Friends of the Princeton University Library for 25 years.

“We began with the 4,000 volume Robert H. Taylor Collection, because it seemed like a good, discrete collection to start with,” Sarconi said. “The Taylor Collection is big – it spans several centuries, so it makes for a good sample size.”

From there, the project involves the process of opening PUL’s vaults and working through the inscriptions in the Library’s vast archives. The information gathered will then be used to update PUL’s catalogs to more accurately trace the ownership of collection items.

“As the reference professional for Special Collections, I work directly with the public,” Sarconi said. “Special Collections is open to all researchers, whether they attend Princeton or not. A researcher might write to me and say they are studying book ownership of Mary Smith. If no one has taken the time to include Mary’s name in her catalog, I can’t provide that answer. It’s really difficult to study women’s book ownership if it’s not documented.”

Sarconi also faced the hurdle of being the only staff member working on the Her Book project, which posed a formidable challenge considering the size of PUL’s archives. Thankfully, in May 2020, Her Book was awarded a Princeton Center for the Digital Humanities Seed Grant, which she used to hire Princeton undergraduate Nicole Gomez to assist with the project.

A third-year student with a concentration in English, Gomez was working in Firestone Library in early 2020. She and Sarconi were already well acquainted, having a shared interest in female representation in Special Collections.

“Emma actually helped me move out in March when the pandemic began,” Gomez recalled. Later that fall, Sarconi asked Gomez if she was interested in helping her with Her Book.

“I’m so happy she did,” Gomez said. “I’ve always had a love for literature, reading, and writing. My own research is in queer literature and female authorship, particularly in the Victorian, Romantic, and postmodern periods.”

In the months that followed, Gomez worked with Sarconi to ensure the accuracy of the data they were collecting, as well as to update the PUL catalog with photos of all the markings.

“A lot of the handwriting is very, very old, and the names are hard to read,” Gomez said, noting that she meets with Sarconi to discuss the more illegible entries.

Sarconi added that once they’ve categorized a bulk of the inscriptions, the goal is to take the project public and make their findings openly accessible to researchers while taking feedback and updating their work as necessary. 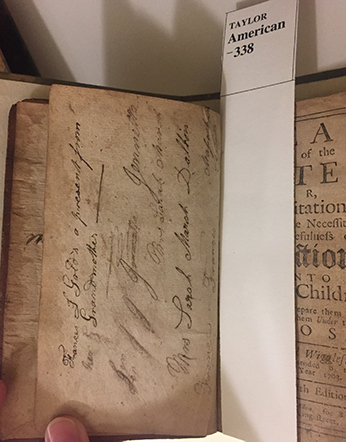 Meat out of the Eater, an example of a book with multiple inscriptions. Image from Emma Sarconi

“You can’t just plop this online. It’s not a static document,” Sarconi said. “I’m really trying to be up front about the things I know and don’t know about these names, and I want to work with others to be as accurate as possible.”

For Gomez, working on the project has not only given her insight into intersectionality, but also brought her closer to one of her favorite places on campus.

“I’ve been working here since sophomore year. PUL has become my home base here on campus,” Gomez said. “And being a part of this project helped me figure out I want to pursue a Master of Library and Information Science.”

In Sarconi’s case, she is pleased to have encountered books owned by prominent figures, such as British aristocrat Mary Abney, the poet Sarah Hoare, and the author Lady Louisa Stuart.

However, she’s more impressed by the personal inscriptions left behind for future generations.

“We have a copy of ‘Little Women’ that has three different inscriptions from different people,” Sarconi said. “Things like this make you feel like you are part of something. Somebody’s grandmother gave them a copy of the book you love. You feel a connection to people you’ve never met.”

The Her Book project is expected to launch publicly this spring. Sarconi invites questions or comments about the project via email.