New to Marquand Art Library - A cache of Kunisada

Coming soon to Marquand Library’s rare book collection—fresh from their appearance in a New York gallery exhibition on the works of Utagawa Kunisada (1786-1855)—are five woodblock-printed titles (in multi-volumed sets) designed by the artist at the height of his career. Each of the books is an extravagantly produced first edition sponsored by a wealthy connoisseur for an elite audience of his colleagues and friends. 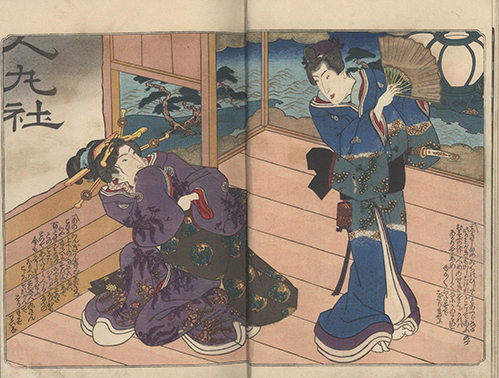 The fifth, which merges the popular theme of actor portraits with the classical trope of the “Thirty-six Immortal Poets,” is printed in black, white and shades of grey. It is considered by scholars to be the most lavishly produced non-erotic book by Kunisada. After these expensive first editions were printed, the woodblocks were employed to print runs of cheaper editions for the general public. These subsequent editions proved to be so profitable that they established Kunisada as a premier artist of erotica, which continued to be the most popular subject matter of Japanese woodblock prints and books in the 19th century. 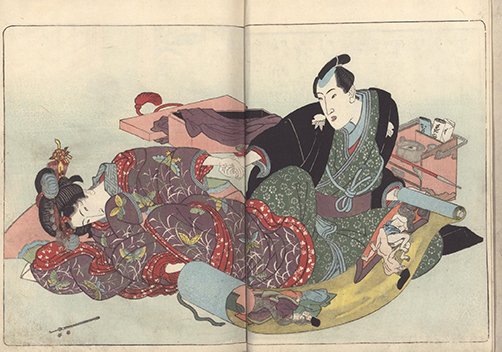 The first of the recently purchased titles to be published is the 4-volume set, Spring, Summer, Autumn, Winter: Singing of Love in the Four Seasons [Shunka shūtō: shiki no nagame] (1827-29). Its beautifully designed and richly colored illustrations are punctuated with racy stories written by Tatekawa (Utei) Enba (1792-1862) and his elite poetry circle. 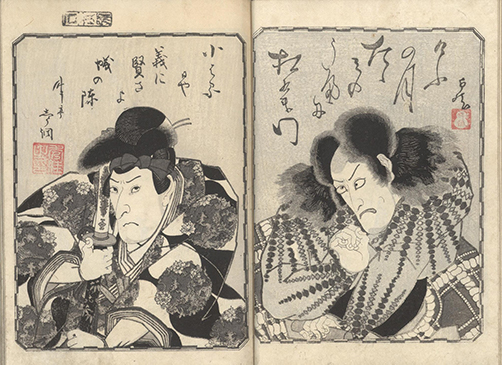 Published in 1835, the second book, Thirty-six Actor Poets [Haiyū yakusha sanjūrok’kasen] was printed in black and white and shades of grey which, at the time, was just as expensive as color printing. The illustrations were also embossed with a carved “blind (un-inked) block” that has created sculptural texture in the soft thick paper. Typical of the “Thirty-six Immortal Poets” trope, actors in this book are shown “pitted against” one another in a poetry competition. The poem offered by each actor appears in beautiful calligraphy above his portrait. 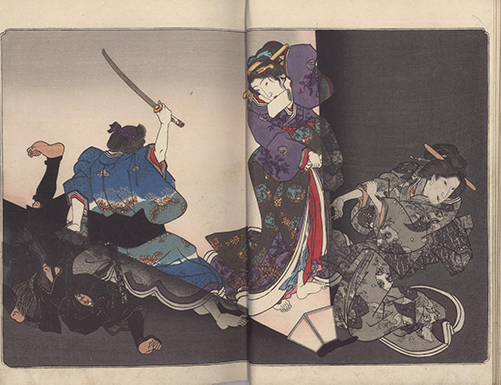 Between 1829 and 1842, the author Ryūtei Tanehiko (1783–1842) wrote a wildly popular parody of the literary classic, The Tale of Genji [Genji monogatari] (ca. 1000). Known as “The Rustic Genji” [Nise Murasaki inaka Genji], the serially published volumes of the novel were all illustrated (in black and white) by Kunisada. As in the original Genji, Tanehiko’s protagonist had many amorous adventures, but Kunisada’s illustration of the text remained appropriately discreet. The romantic liaisons, however, appear to have sparked the idea to create separate erotic and more luxurious versions of Rustic Genji, illustrated by its original artist. Three of these are part of the recently purchased Kunisada cache: The Amorous Murasaki Finds Pleasure in Fifty or More Chapters [Enshi gojūyo jō] 3 vols. (1835) (See above and first illustration.); Deep Feelings of Birds and Flowers: Genji of the East [Kachō yojō Azuma Genji] 3 vols. (1837); and A True-Life Devoted Genji [Sho-utsushi aioi Genji] 3vols. (ca.1851). This last title is particularly valuable to researchers as the original wrapper for the books—something rarely seen in Japanese rare books—has been retained. (See below.) 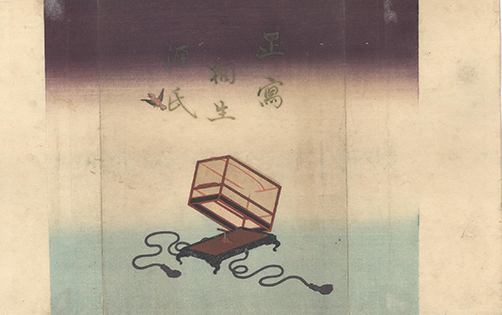 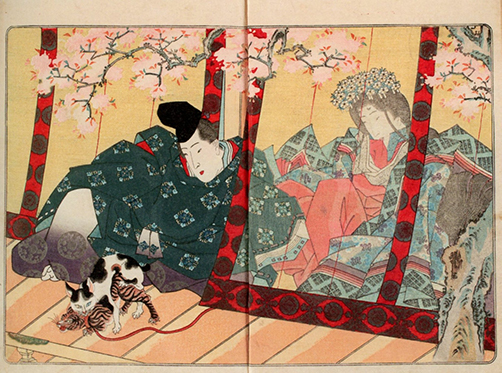 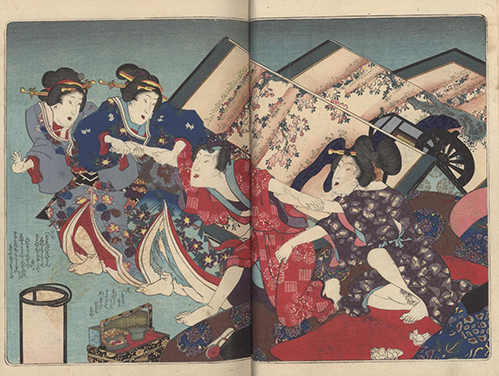