A new digital Princeton University Library (PUL) exhibition explores the bird imagery in the Library’s Digital Repository and highlights the importance of birds as an indicator species, serving as one of nature’s primordial messengers of climate change. 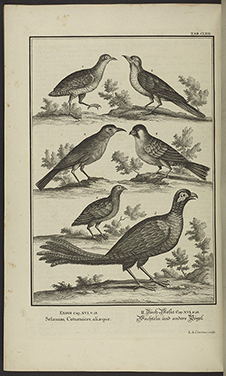 Titled “Capturing Feathers,” this exhibition is inspired by the work of Charles H. Rogers (Class of 1909), curator of Princeton University's ornithological collection from 1920-1977. The personal bird journals of Charles Rogers, which span a period of seventy years, are being digitized as part of an ongoing collaboration between the Department of Ecology and Evolutionary Biology (EEB) and the PULDigital Imaging Studio.

“We framed the project as bird-watching within the PUL repository,” Cabral-Pierce said. “It was a pleasant surprise to meet so many birding enthusiasts, not only among the scientific community at Princeton University such as the students, researchers, and faculty at the Stoddard Lab, but also among Princeton University Library staff.” The Stoddard Lab studies animal coloration and avian sensory ecology, evolution, and behavior through a multidisciplinary approach that includes a focus on visual communication and signaling in birds.

“Birds can be a wonderful bridge between science and the humanities,” explained Mary Caswell (Cassie) Stoddard, Assistant Professor in EEB.“They have inspired not just biologists but also artists, writers, and historians for millennia. This digital exhibit provides a window into the universal appeal of birds through the ages.”

Among other items, the exhibition includes a journal page from Rogers’ personal album, a monochrome book page titled “Physica Sacra,” as well as a color plate from the Cotsen Children’s Library Collection.

In addition to being a comprehensive and visually impressive exhibit, “Capturing Feathers” also supports the research efforts of Stoddard’s lab. “Sometimes bird images from the past—like those in the splendid Mesoamerican watercolors or Egyptian papyrus scrolls featured in this exhibit—can hold clues to which bird species were present in a specific time and place,” Stoddard said.

In the coming months, the Library will continue to work with EEB to digitize and transcribe the entirety of Rogers’ holdings in a separate collection.

Audrey Miller, a PhD student in the Stoddard Lab who investigates avian coloration and morphology added, "I think this collection has brought us so much more than just the data in Charles Rogers' bird lists. While these journals are really incredible in themselves, the project to digitize the collection has fostered a wonderful collaboration with the Princeton University Library. The people we were able to work with throughout this project have truly been amazing and it's been really rewarding to see how these journals inspired each of us in their own way.”

To learn more about Roger’s records and affiliation with the University, and to view the exhibit, visit https://dpul.princeton.edu/capturing_feathers.