Archival materials tell the stories of people from the past -- their experiences, struggles, and heartache.

But who determines the contents of an archive? How do a library’s holdings influence historians? Whose stories get told and whose do not?

Students in the course, “Archiving the American West,” taught by Martha Sandweiss, professor of history, in collaboration with Gabriel Swift, curator of Western Americana, and Brian Wright, Ph.D candidate in history, explored these questions by engaging with Princeton University Library (PUL)'s Collections of the American West.

Sandweiss, Swift, and Wright designed the course to not only hone students’ primary research skills, but to teach about the reality of archives as well.

“Archives are created by people with points-of-view,” said Sandweiss. “I wanted students to gain a real sense of the politics.” 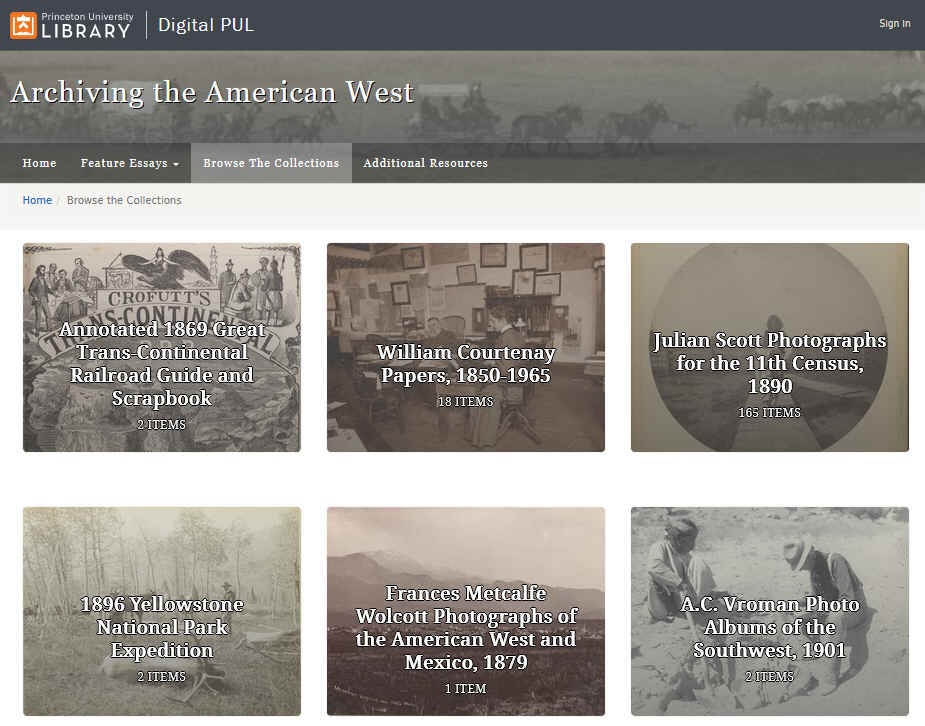 The course syllabus required students to write a research paper analyzing a recent PUL acquisition; develop a proposal to purchase archival items with Library funds that would expand the diversity of Princeton’s holdings; and publish an online exhibition of an un- or under-cataloged collection documenting the American West.

“We wanted to empower undergraduates to discover and document something—or perhaps everything—about objects and documents that were little-known or unknown to historians,” said Wright. “Much of the material that students researched was purchased, cataloged, and digitized exclusively for the course, so they really were taking a first pass at it.”

The class format involved one hour of readings, one hour of working with digitized materials, and one hour with a guest speaker, ranging from rare book dealers to library curators.

One guest speaker was Dr. Yolandra Gomez Toya ‘88, whose mother grew up in a boarding school for Jicarilla Apache children in Dulce, NM in the 1930s.

Sandweiss knew Toya lived near the area and reached out to her for ideas on how to talk about the 1931 photographic album of Dulce, NM held in PUL’s collections. After Toya realized her 90-year-old mother had lived in the boarding school, she agreed to record an interview for the class. 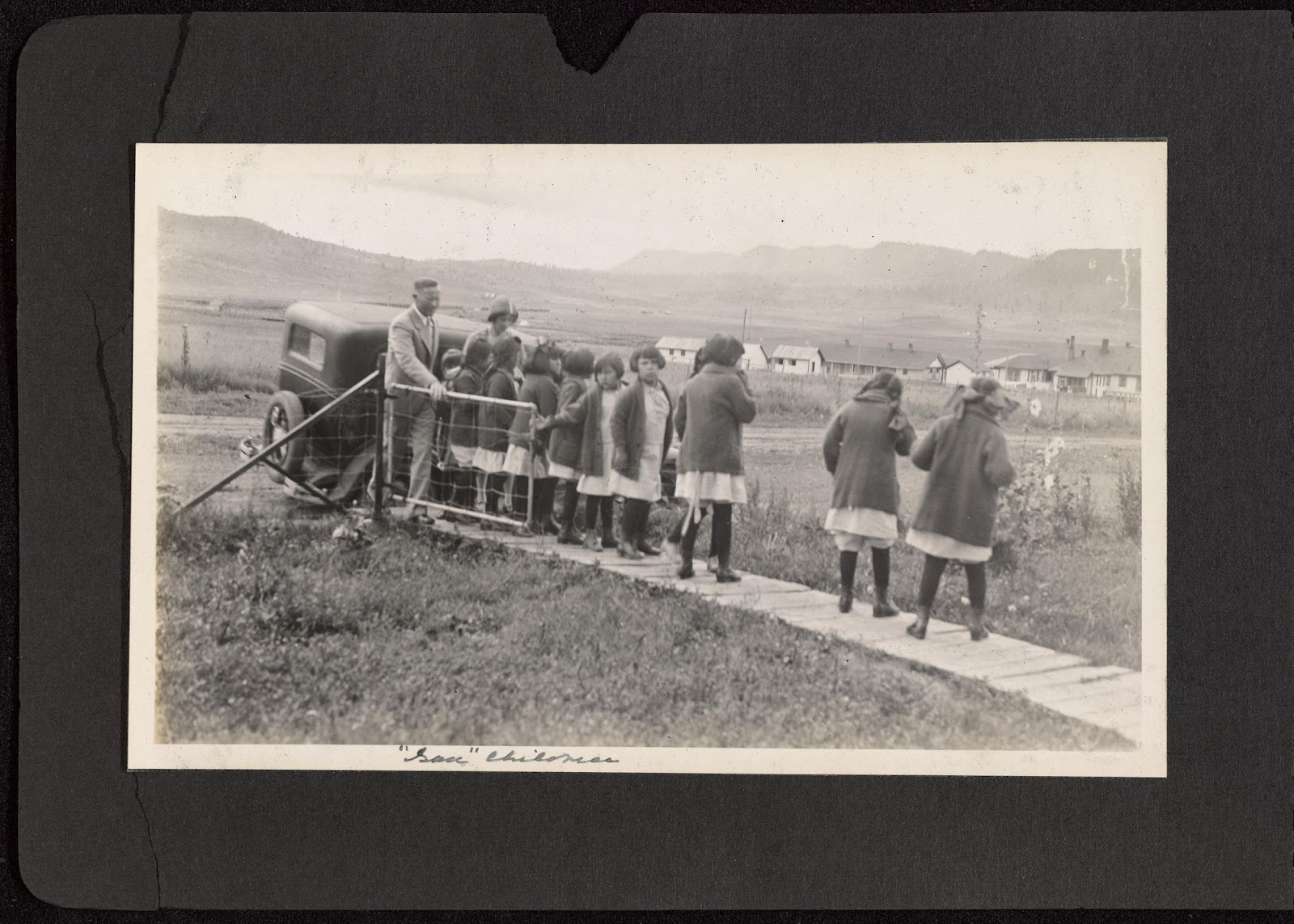 “I was a little nervous to be honest,” Toya said. “The religious, residential schools have always been difficult for our family to talk about.”

Toya’s mother, Cora Vigil Gomez, was born into a Jicarilla Apache family, probably in 1931. Gomez’s parents kept her birth a secret to hide their daughter from local missionaries. When the missionaries discovered Gomez, they came to the family’s house with Indian police who threatened to put her father in jail if he didn’t give up his daughter. For eight to 10 years, Gomez lived at the boarding school, seeing her parents only a few times each year.

“Whenever my mom talked about the school, she’d say they were the loneliest years of her life,” said Toya. “It’s still very painful.”

Toya interviewed her mother in March 2021, after not seeing her for an entire year due to the COVID-19 pandemic. COVID hit Native populations very hard, explained Toya. Communities lost many Native speakers.

Toya’s mother was able to identify many of the teachers and students in the photo album, noting a specific little boy who would die of tuberculosis, a girl who would marry a trader, and another boy who would leave the reservation. 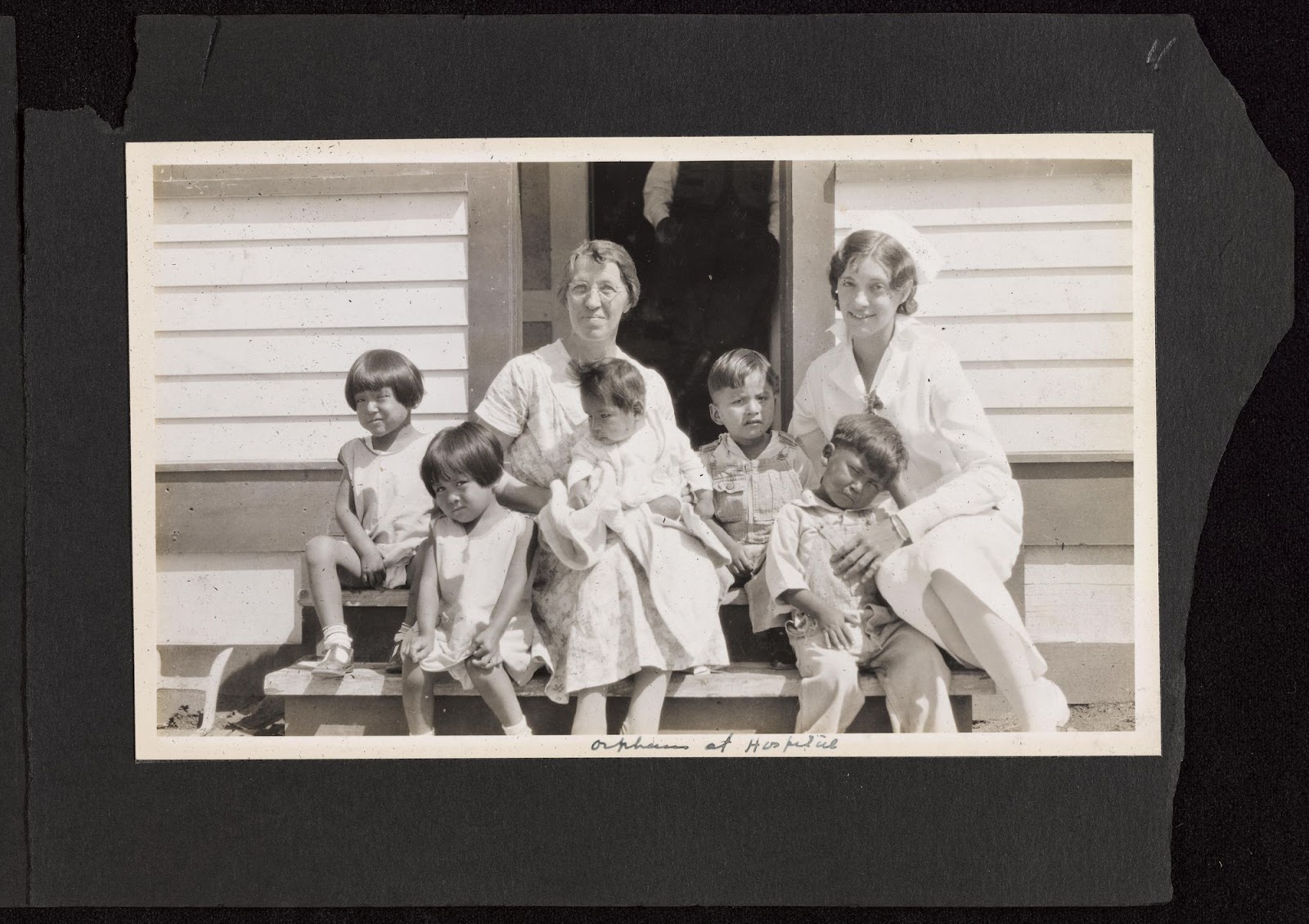 “It was a conversation that needed to happen,” said Toya. “It’s not talked about enough. These boarding schools were part of the systematic destruction of our language, our culture, and our people. We’re still feeling the ramifications in our communities today.”

Many non-Natives “view us as historical artifacts,” with a romanticized view of spirituality, teepees, and art, said Toya. “They don’t realize that we’re human. We live and breathe the same air. Today I’m wearing scrubs and tennis shoes.” Toya expressed that education needs to happen “with open hearts and minds.”

Toya works as a pediatrician, following her family’s lineage of healers. Gomez became one of the first female tribal council leaders, while raising ten children with her Hispanic husband.

Sandweiss recognizes the responsibility that libraries and institutions have to connect archival materials with the communities from which they came. “These stories don’t end when materials enter the archive,” said Sandweiss. “They’re continuing to unfold. History matters. People in Dulce still live there.”

Noa Greenspan, a member of the class of 2023 and an English major, learned firsthand the importance of stories. For her final project, Greenspan analyzed two photographic journals documenting an 1896 hunting expedition into Yellowstone National Park.

One of the journal’s itinerary listed everyone on the trip, but included only the last name of the guide, “Short Bull.” Two men, Arnold and Grant Short Bull, were born around the same time and were conflated in historical records.

While searching for more about these men, Greenspan found a website by Arthur Short Bull, who has been researching his great-grandfather, Grant Short Bull, a member of the Oglala Sioux.

Greenspan called Arthur to put together the pieces. “He had so much information to teach me,” said Greenspan.

For Arthur, the 1896 expedition was new information, but he noted that his great-grandfather’s role made sense, given his military position and knowledge of Wyoming’s land. 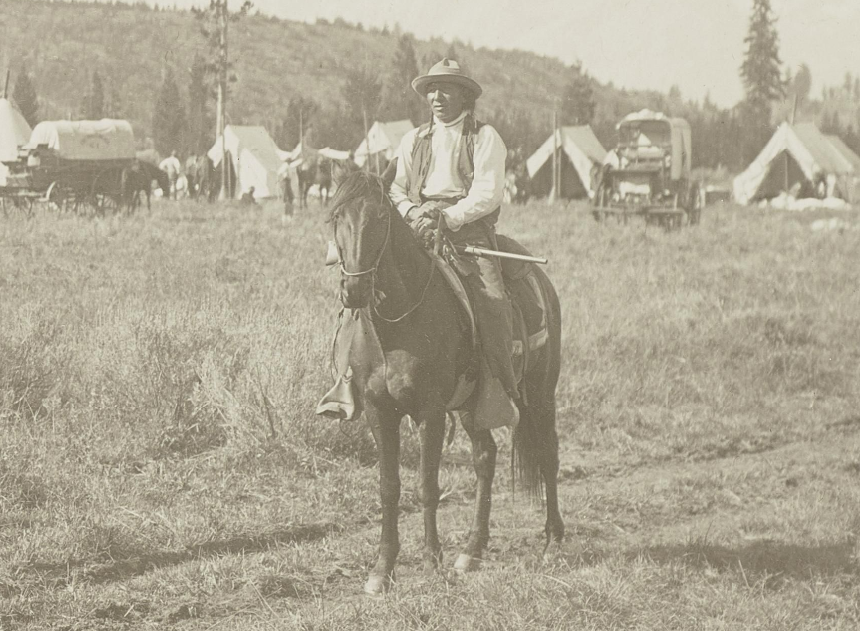 Grant Short Bull, pictured on horseback during the Webb hunting expedition. Photograph by F.J. Haynes. Bare Outlines of a Brief Trip to the Jackson Lake Country in Northwest Wyoming, 1896.

Greenspan recorded her conversations with Arthur (available through the online exhibition), who spoke about historical erasure and America’s complicated past and present.

Regarding Yellowstone, Arthur said: “The only positive thing I can say about national parks is that at least they keep [them] pristine in some cases...I enjoy that, because that shows me that at one time, this country was a beautiful place to be…But at the same time, my entire life I’ve always had problems with people claiming territory that does not belong to them.”

The future of the archives: Diversifying narratives

“Meeting weekly with the students and guest speakers was truly a transformative experience,” said Swift. “Especially rewarding was the way in which the course design encouraged students to uncover hidden narratives and connect collections to local communities. Likewise, the archival formation assignment in which students identified materials from underrepresented subjects brought several exciting and diverse collections to the Library.”

For this assignment, Jacquelyn Davila, a member of the class of 2022 and a history major, examined Mexican-American food in the American West. “In thinking about the West and the long history of Mexican people in this region of the United States, I did not want to think of Mexican-American food as a product of just Mexico or the U.S., so I built an archive that was both regional and transnational,” Davila said.

Davila uncovered “The Mexican Chef,” a cookbook published in 1831 that was emblematic of Mexican cuisine, printed right after Mexican independence. Davila selected this book for PUL to purchase because of “its importance in asserting Mexican national identity, but also because a lot of its recipes would appear in Encarnación Pinedo's “El Cocinero Español” - “The Spanish Chef” - which showed the transborder/transnational nature of this regional food culture.” Published after “The Mexican Chef” in 1898, this cookbook is considered to be the first Mexican-American cookbook ever published in the U.S.

“Many of Pinedo's recipes appear to have been directly influenced by “El Cocinero Mexicano,” Davila explained. “However, as was commonly done at the time both by Anglo-Americans and Mexican-Americans alike, Pinedo strategically chose to label her cookbook as "Spanish."

Davila found a pamphlet of recipes printed by the USDA, published on the east coast in 1917 during WWI. “The pamphlet was government propaganda trying to convince housewives that cooking cornmeal is patriotic,” explained Davila.

These items tell the story of a century of transformation, “from the elite who viewed Indian food as inferior to European food, coming to a pamphlet recommending women to cook tamale pies as an act of patriotism,” said Davila. 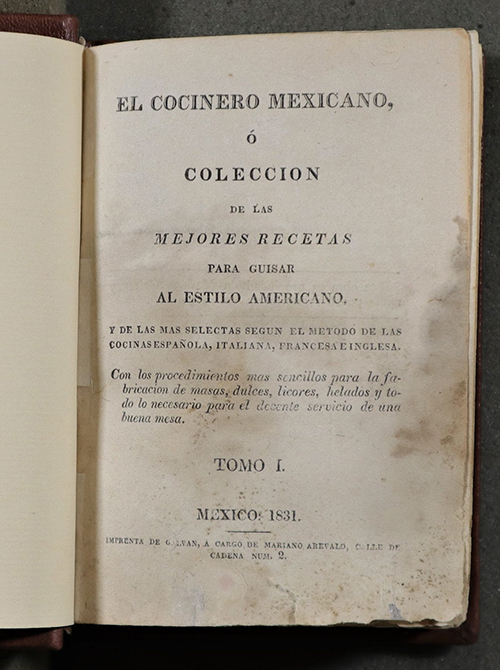 Growing up in Sacramento, California, Davila said: “The type of history I learned was Gold Rush. We dressed up as settlers, and heard the narrative of the 49er...this was the first course that made me question the archives and their role in historiography, not just how scholars have mapped out history, but also how public history plays out in people’s collective memory.”

Sandweiss and Swift said that every student in the class found material that was acquired by PUL.

For Katie Bushman, a member of the class of 2022 and a history major: “The course showed me a lot about the different careers in this field, from what Gabriel [Swift] does at Firestone, to people who are in the bookselling business.”

Bushman visited PUL’s Special Collections several times during the semester for the course and for her junior paper. “Holding the letters and diaries, written by people in the past, makes history feel so real,” said Bushman. “It connects us to the human side of the past.”

Beyond diversifying its collections, PUL aims to expand access and bring to light its existing holdings. The aim of the course’s final project was to give future researchers intellectual access to under-cataloged collections.

Sandweiss, Swift, and Wright, along with four other graduate students, also work on The Public Transcriptions Project, supported by a 2020 Humanities Council Grant, which aims to adapt PUL’s 19th-century manuscripts into searchable digital articles, as accessible, readable, and user-friendly as possible.

According to Wright: “To me, Princeton’s Western Americana collection offers something for any scholar of the region or the United States—classic subjects like cowboys, ranching, and economic development can be found in the Philip Ashton Rollins Collection; it boasts an extensive collections of Western photography, especially from the 19th century; an excellent collection of Mormon Americana, one of the best outside Utah; and dozens of diaries and journals written by settlers making their way into the “Great West” for escape or opportunity. The collection is constantly evolving, and Gabriel [Swift] has made intense efforts over the years to collect material focusing on the experience of Native Americans, African Americans, Hispanic people, women, workers, and other underrepresented groups to get at the full story.”

This story is part of PUL’s Teaching with Collections series.