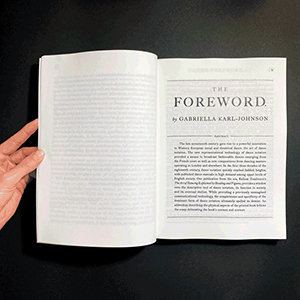 Gabriella Karl-Johnson's foreword in The Art of Dancing Explained by Reading and Figures by Kellom Tomlinson.

Architecture Librarian Gabriella Karl-Johnson’s research on Baroque dance notation has recently been published as the foreword to a republication of Kellom Tomlinson’s classic work of dance instruction, “The Art of Dancing Explained by Reading and Figures,” originally published in London in 1735. The newly re-typeset edition has been published by the Amsterdam-based publisher House of Oktober.

Previously, Karl-Johnson published a chapter on the architecture and design library at Universidad de los Andes in Bogotá, Colombia, in a recently released book from De Gruyter entitled “New Libraries in Old Buildings.” The book is part of De Gruyter’s International Federation of Library Associations and Institutions series and features case studies that explore the difficulties and opportunities of designing libraries in historical contexts. The book is an open access publication that can be downloaded free of charge.