Mysteries sit among the shelves that weave through Princeton University Library (PUL). Library staff regularly seek answers to questions about collection ownership or the age and rarity of materials. Sometimes those puzzles have straightforward solutions – a cover inscription or some notches on the binding. Other times, they are tucked between pages that appear to have nothing to do with the item in question. 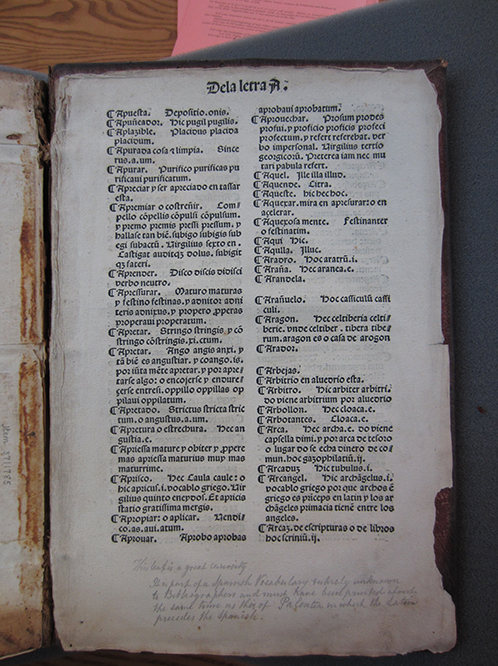 A few years ago, Scheide Librarian and Assistant University Librarian for Special Collections, Rare Books, and Manuscripts Eric White had one of those mysteries. Inside the 15th century dictionary “Universal vocabulario en latín y en romance, vol. I” by Alfonso Fernández de Palencia were a pair of pages that didn’t quite fit.

“In the 1870s, one of our early librarians, Frederick Vinton, wrote a little note in the book recognizing the misplaced pages,” White explained. “Our cataloging didn’t really make a matter out of it, but around 2017 I noticed it while reviewing the books in the collection. [Librarian for Academic Programs & Curator of American Books & Western Americana] Gabriel Swift and I look for interesting things in bindings. As part of that survey I thought, ‘these pages don’t quite belong here, but this looks interesting.’”

White added that the fact that the pages were in Spanish clued him into their importance. “Anything in a vernacular language, like Spanish, English, Dutch, German, or Italian, is noteworthy in the 15th century because most of the books from that time were in Latin. It was worth investigating but I couldn’t figure out what it was.”

In February 2018, PUL hosted Dr. Cinthia María Hamlin, an Argentine philologist from CONICET and the University of Buenos Aires, who visited the Library to work with several early Spanish books. White took her visit as a chance to ask if she had any interest in the rogue leaves that sat within the Latin-Spanish dictionary. They agreed the pages required further inspection, and embarked on identifying their origin.

At the time, White had a bit of information about the book to which the pages were bound. “Vocabulario” was printed in 1490, and was missing its title page and introductory “argumentum.” Acquired by PUL in the 1870s, the stray pages, he posited, were likely recycled for use as front and end protective pages for the dictionary in the 18th century.

Prior to collaborating with Hamlin, White worked with Oliver Duntze from the Union Catalogue of Incunabula (Gesamtkatalog der Wiegendrucke) in Berlin to identify that the typeface matched that of the Seville press of Meinhard Ungut und Stanislaus Polonus from 1491-1493.

“I always write to Duntze and [his colleague] Falk Eisermann with questions, and we’ve identified many items over the years.” White said. “But since none of us were Spanish linguistics specialists we let the mystery sit for a while.”

Slowed by the fact that the stray pages didn’t match any known Spanish dictionary from the 15th or early 16th centuries, White turned to Hamlin for further analysis.

Working with digital versions of the pages, Hamlin first noticed that the pages provided another hint about their origins—a dedication to Queen Isabella that mentions her as “Reina de Granada”, which allowed her to narrow down the date: it had to post-date Granada’s conquer, i.e. January 1492. Then she began cross-referencing them with potential matching texts by the humanist Antonio de Nebrija and the theologist Fernández de Santaella. She then analyzed the linguistic characteristics of the pages, which, with the help of her colleague Juan Héctor Fuentes, she matched to an anonymous fifteenth-century “Vocabulario.”

Fuentes then informed Hamlin about a 15th-century manuscript located at the Royal Site of San Lorenzo de El Escorial, which houses, among other facilities, three libraries.

“Upon closer inspection, Hamlin found that these PUL fragments were matching up with the Escorial manuscript, which was undated and unsigned, but was a Spanish-Latin dictionary,” White said. “It had the right words and the right definitions. Some of the definitions had little quotations from the classical poet Virgil. Even a couple of mistakes were showing up in that manuscript and in our fragments.” This research was published in the renowned American journal Romance Philology (Hamlin-Fuentes, "Folios de un incunable desconocido y su identificación con el anónimo vocabulario en romance y en latín del Escorial (f.II.10)", Romance Philology, 74 (2020), pp. 93-122) and last January received the attention of the Spanish press and radio, receiving a full-page display in the newspaper ABC, and several radio interviews in the RTVE.

Ultimately, based not only on linguistic similarities but also on a rigorous method of ecdotics analysis of the classical quotations, Hamlin concluded that the pages were written by Palencia, the same author of PUL’s dictionary.

Now, three years after Hamlin’s original visit to PUL, the discovery sits as the cornerstone of her latest publication, titled “Alfonso de Palencia: ¿autor del primer 'Vocabulario romance latín' que llegó a la imprenta?” It details the similarities between the newly identified dictionary and Palencia’s “Universal Vocabulario.” The discovery has earned coverage in the Spanish press, with “El Pais,” one of the largest Spanish daily newspapers, deeming it a discovery that “changes the history of lexicography.” 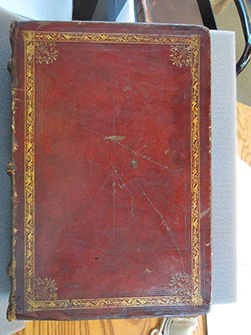 “It’s fulfilling to see how research regarding textual bibliography, codicology, and especially ecdotics, disciplines which are sometimes relegated within humanities, can prove their actual cultural value,” said Hamlin. “Though it’s quite gratifying knowing that my research has contributed to a paradigm change in the history of my own language, the most gratifying thing is that this contribution wasn’t made by a lexicographer, but by a medieval philologist.”

Hamlin was quick to laud White for his “untiring willingness” to inquire about the origins of the stray pages. “Though it may seem to be a case of serendipity, Eric took notice of what I was studying⁠—a Spanish post-incunabulum⁠—and through a series of proper questions, made sure it was a good shot to show them. He was always eager to help in any way. As my research developed and more questions arose, for example regarding the paper watermarks, he sent me pictures immediately.”

Despite their international digital correspondence, Hamlin and White acknowledged that solving the mystery was an analog process.

“The discoveries didn’t come from any type of technology,” White said. “We had to go into libraries and find these books. Digital humanities can give you a big picture, and many data points that are great for all kinds of investigations. But this problem was so specific to what’s on the front and back of these two pages. We employed our knowledge and old-school investigative techniques to solve this mystery.”