Inside the Chronicle: Dylan at Princeton and “Day of the Locusts”: A History

The following is excerpted from the Autumn/Winter 2020 issue; Volume LXXVIII, No. 1.

Dylan at Princeton and “Day of the Locusts”: A History, by Sean Wilentz

FIFTY YEARS LATER, some mystery lingers about the day in 1970 when Princeton awarded Bob Dylan an honorary doctorate in music. Dylan himself has written about it twice, in his song “Day of the Locusts” and in his memoir "Chronicles: Volume One," where he describes it as an unpleasant experience that nevertheless gave him an emblem of solid respectability. Reporting then and since, by journalists, biographers, and historians, along with an interview with one of his sidekicks that day, the unpredictable rock ’n’ roll star David Crosby, have filled in some of the details. 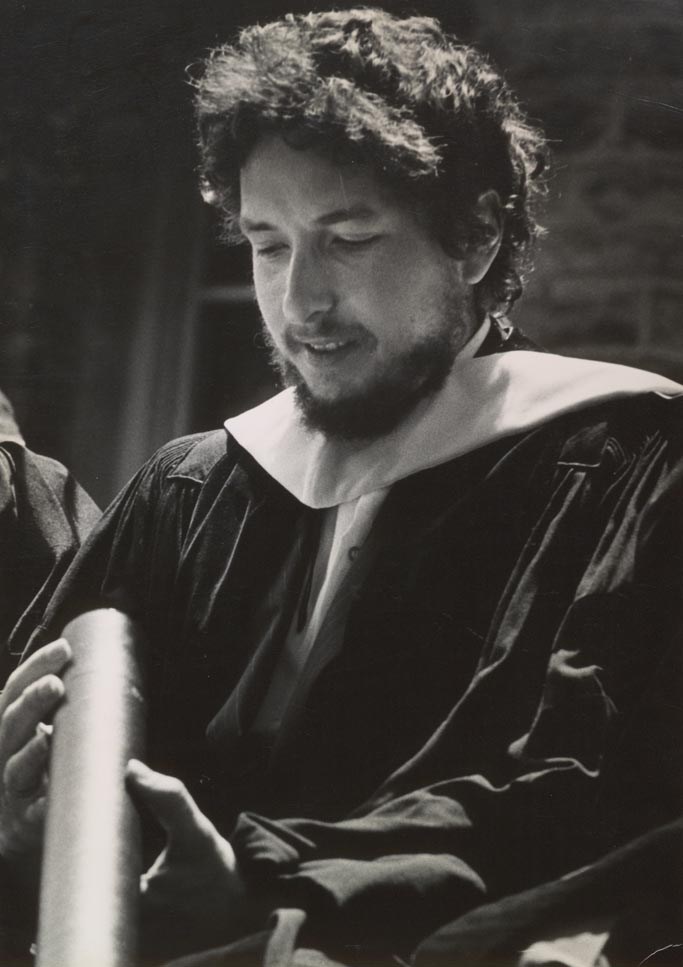 It remains unclear, though, why conservative Princeton, of all places, decided to honor a rule-breaking troubadour, even one as brilliant and admired as Bob Dylan. Nor is much known about why Dylan, an intensely private person who had made only two announced public appearances over the previous four years, would go looking for respectability on a college campus. In “Tombstone Blues,” he put colleges on a par with old folks’ homes; in the comic shaggy-dog “I Shall Be Free No. 10,” he sang of reading poetry at a sorority house and winding up with the dean of women; and in “Ballad of a Thin Man,” he described professors as erudite and clueless.

As it happens, Princeton’s reasons and Dylan’s may have been entwined, something I began to understand only when I stumbled upon a letter in the Bob Dylan Center Archive in Tulsa written by Bruce Funkhouser of the Class of 1970.