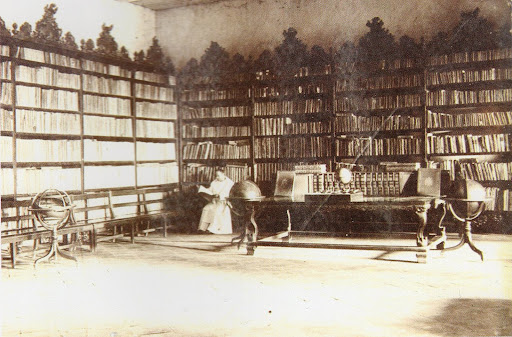 A photo of the San Pablo Library, circa 1880. Anonymous photo. The original photographic print is kept at the San Agustin Museum and Archives (the former San Pablo Library), Intramuros, Manila.

Reconstructing the lost archives of an 18th-century Spanish-Philippine library will now be possible with funding from the National Endowment for the Humanities (NEH).

On Jan. 11, 2022, Princeton University and the School of Arts and Sciences (SOAS) University of London were awarded a $480,000 grant from NEH/AHRC New Directions for Digital Scholarship in Cultural Institutions program, a joint initiative between NEH and the U.K.’s Arts and Humanities Research Council to advance digital scholarship at museums, libraries, and archives.

The grant will fund the digital humanities project, titled “The Library of the Convent of San Pablo (Manila, 1762).” The project seeks to virtually reconstruct the library’s materials as close to how the archives might have been in 1762 before the British siege of Manila. During the siege the repository of more than 1,500 rare manuscripts, maps, and early printed materials relating to the Philippines and other regions of Asia were seized and auctioned off, subsequently scattering them across three continents.

At Princeton, the project will be led by Associate Professor of Spanish and Portuguese Christina Lee, faculty Co-director, and Assistant University Librarian for Research Services, Anu Vedantham, librarian Co-director. At SOAS University of London, the project will be led by Research Fellow in the South East Asia Section Cristina Martinez-Juan, Principal Investigator.

“I believe that digital repatriation represents a new frontier for academic libraries as we embrace principles of post-custodial collection development,” said Vedantham. “Through the careful use of high-quality digitization and metadata creation that is inclusive, flexible and reflective, we can create digital surrogates for physical materials, reveal connections across institutional boundaries, and make more items available open-access. Collaborations with faculty on projects such as this one allow our library to be of service to research scholars worldwide. We are glad to reduce barriers to access, especially for community members for whom these materials have personal and cultural significance.”

The project will involve several PUL units, working on metadata creation, outreach, and discoverability. Vedantham will be working closely with Assistant Director for Information Technology Esmé Cowles and his team and Assistant University Librarian for Metadata Services Jennifer Baxmeyer and her team.

“It's a somewhat complicated project,” said Cowles, “since it's being jointly developed by Christina [Lee], her colleague at SOAS University of London Cristina [Martinez-Juan], and the Library. But I expect the metadata to work very much like similar processes we’ve used for other digital projects recently.” 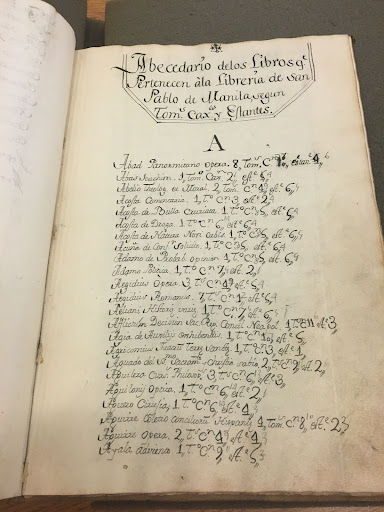 “Abecedario de los libros que pertenecen a la librería de San Pablo de Manila.” A page of the Catalog of the Library of the Augustinian Convent of San Pablo in Manila. 130pp. recording about 1,500 titles, first by shelf position, then alphabetically, with notes of additions up to May, 1762. Photo by Cristina Juan, ms. at the Lilly Library, Indiana University (the current location of a large portion of the lost archive).

Based on a three-year plan, metadata for the 1,500 collection items will be created and ingested into Figgy, Princeton University Library’s (PUL) digital content management system that supports books, manuscripts, maps, and ephemera.

A selection of 300 items will be transcribed and translated beyond their metadata entries, while a further six will be extensively documented, analyzed, and annotated as a model for the type of scholarly work that the digital library can support. These items will also be virtually exhibited on the Digital Princeton University Library website to help promote the efforts of the project and encourage the continual growth of the archive.

Among the six items to be further documented are “Testimonies of the Chinese migrant massacre of 1639 in Taal from the point of view of a Chinese migrant survivor,” “A Tagalog account on the native revolt in Southern Manila against their priest,” and “An anonymous codex about life in Manila with satirical observations about its Spanish, Mexican, creoles, Chinese, mestizo, and native inhabitants.”

The goal with these items is to spur academic engagement with the material, explained Lee. The restored library is intended to be openly accessible, and is meant to be both a cultural archive for indigenous populations and a launch pad for future academic inquiry.

“The idea is to show the magnitude of what you can do with this kind of text, so that scholars can read the text against the grain and people can use these items as a point of entry to this topic,” said Lee.

Martinez-Juan created a prototype site through a  seed-corn grant from SOAS, University of London. The prototype was used as a scoping exercise to conceptualize the narrative of the project and to look for possible grants to fund the full project. She also came to the project experienced in targeted crowdsourcing, which will be an integral part of getting the digital library up and running.

“Crowdsourcing,” explained Martinez-Juan, “is a way to connect with an audience beyond academia. It is an attempt towards a decolonial exploration of the manuscripts by creating an avenue for dialogue, knowledge exchange, and collective ownership.”

“We are also looking forward to having these materials available to further PUL’s work on indigenous studies and to support the University’s academic experience through teaching with collections,” added Vedantham.

Librarian for Latin American Studies, Latino Studies, and Iberian Peninsular Studies Fernando Acosta-Rodríguez cited the project as a major contribution to an area of study in which identifying and accessing sources has been a sizable challenge for students and scholars.

“The significance of the project,” he emphasized, “is that by digitally reconstituting the Library of the Convent of San Pablo in Manila, the partners collaborating on this project will be making an extraordinarily rich corpus of primary sources readily available to researchers interested in the study of Spanish colonialism in the Philippines and the Pacific.”

Enthusiasm between the project partners is high, reflected in Lee’s concluding remark, “I’m beyond thrilled to dedicate the next years of my career to this project.”

The NEH funding will also support 10 travel grants for underfunded scholars from around the world to visit the planned conference at Princeton University that will finish off the final year of the project.