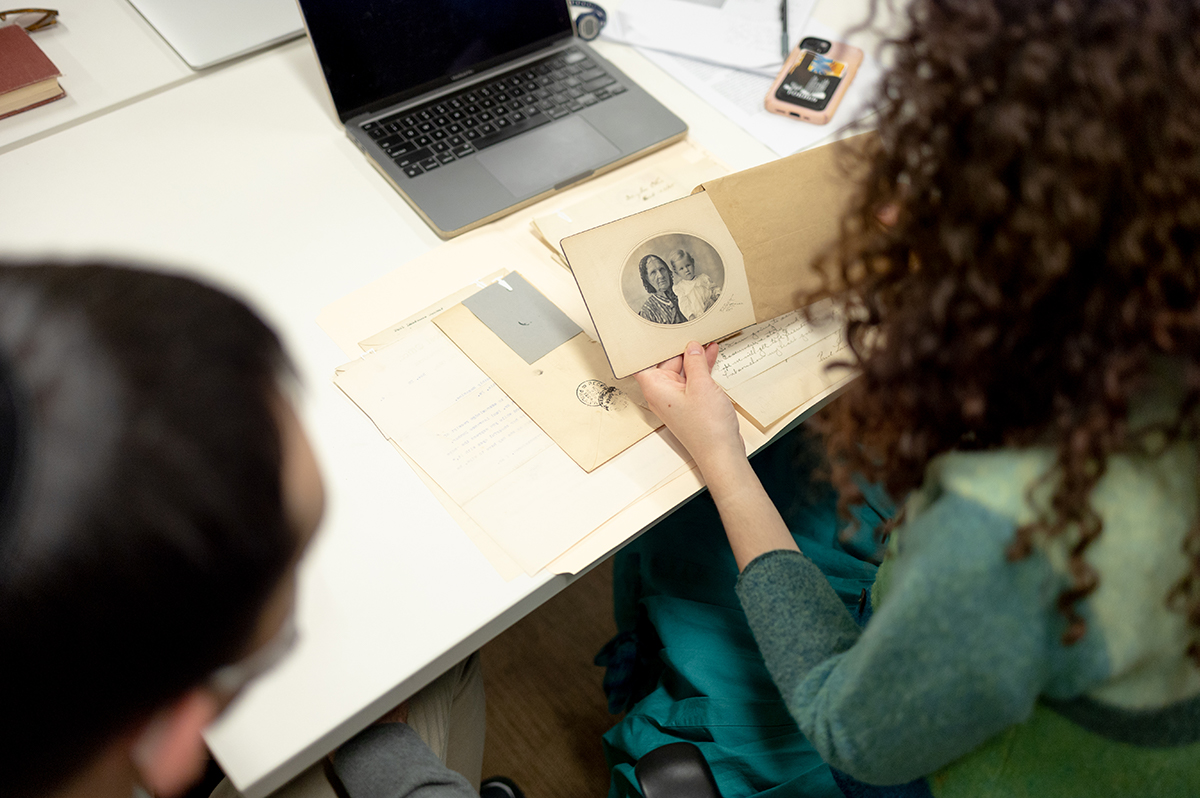 What does James Joyce's "Ulysses" tell us 100 years later? Published in 1922, the same year the Lincoln Memorial was dedicated and the Hollywood Bowl opened, “Ulysses” is an inextricable part of the modern literary canon that’s received more than its fair share of praise (and criticism).

Joshua Kotin, associate professor in the Department of English, thinks we’ve only scratched the surface of what “Ulysses” has to offer. His class, “Special Studies in Modernism: 1922,” explores James Joyce’s work as well as contemporary publications from T.S. Eliot, Virginia Woolf, and Claude McKay in consideration of their influence 100 years later.

“This class presents a way to think about modernism and to reflect on the importance of that year to the development of cultural history, especially Anglophone literary history,” Kotin explained.

The spring 2022 term is the first and likely only time Kotin will offer this course. Sparked by the centenary, Kotin felt that modernist studies is due for a renaissance. Beyond wanting his students to examine the course texts and glean their literary significance, Kotin emphasized the process of contextualizing literature as part of a larger, historical conversation.

“I wanted them to think about what context is – we were always told to contextualize literature but I’m not sure anyone really knows how to define that process,” Kotin said.

To that end, Kotin enlisted the help of Jennifer Garcon, Librarian for Modern and Contemporary Special Collections, for the class, which frequented Princeton University Library’s (PUL) Special Collections. Garcon handles the collection, curation, and care for 20th and 21st century materials, making her a perfect fit for a class about 1922. 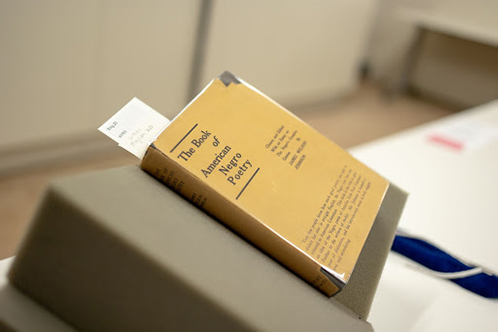 The Book of American Negro Poetry, published in 1922, was a reference point for the class. Photo Credit: Brandon Johnson, communications specialist.

Garcon supported the class by navigating the Library’s archives, calling up numerous copies of Joyce’s “Ulysses” from the Sylvia Beach Collection. Beach, an American bookseller in Paris, was responsible for first publishing “Ulysses” at her bookshop and lending library, Shakespeare and Company.

“The students have been able to see different editions of Ulysses,” Garcon said. “They've been able to see it serialized, in its initial publication in the small magazines. They've been able to touch and handle the objects themselves. And because of the variations in the way it’s been printed, and the financial constraints of the publishers at the time, they can see a visceral difference in the material over time as well.”

Kotin and Garcon shared a synergy in the classroom, bouncing ideas about texts off of one another as they flipped through pages. As researchers, they frequently returned to the question of how to build new collections using the materials pulled from the archives.

“We’ve discovered things together that we didn’t know were in Special Collections and recognized gaps to be able to say, ‘It would be great if the Library could acquire material in this area,’” Kotin said.

One class, for example, saw the inclusion of the anthology, “The Book of American Negro Poetry,” edited by Black American writer and civil rights activist James Weldon Johnson. Kotin used the text to further illuminate the time period during which “Ulysses” was published by investigating PUL’s holdings on each of the authors preserved in the anthology.

What he found were letters by these Black authors, almost entirely in the archives of white editors and poets.

“So now, we have to think about how to build collections that are more than miscellaneous letters,” Kotin said. 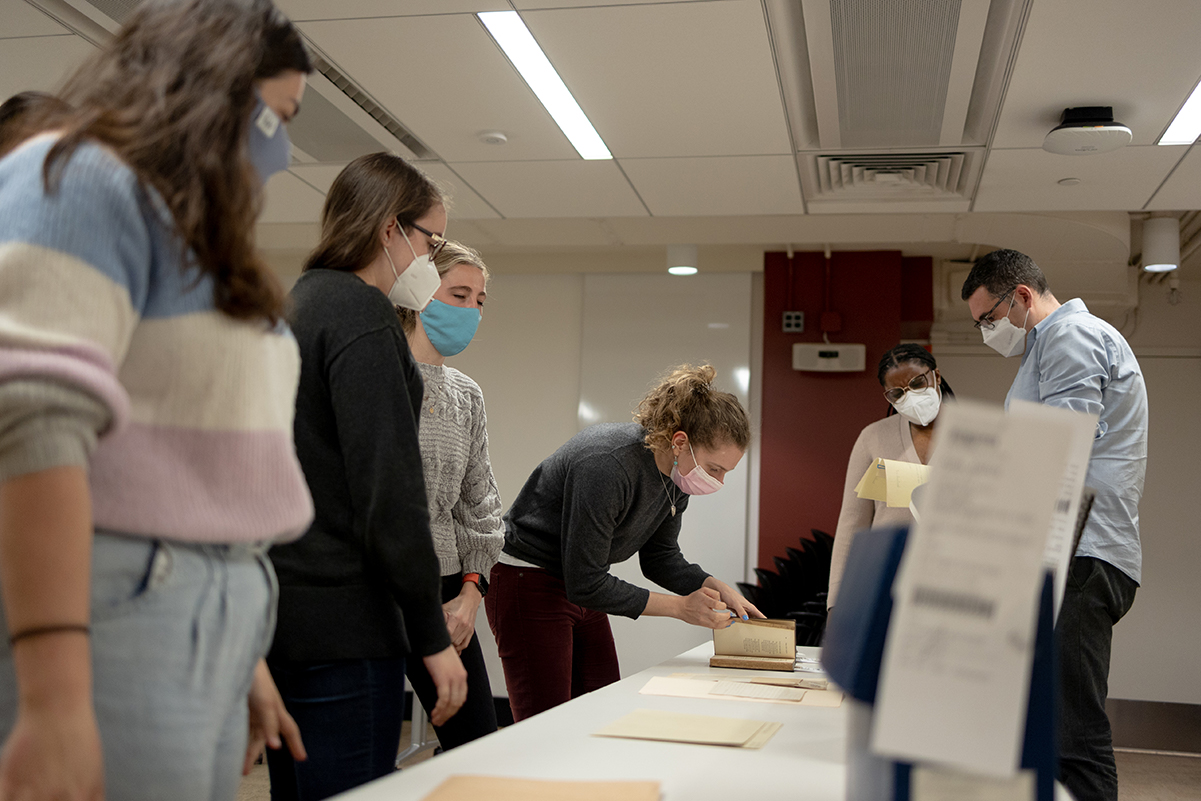 Kotin admitted that one of his challenges was also one of the core goals for his students - doing archival work.

Students were tasked with looking through PUL’s archives and finding something — anything — that has yet to be published and writing about it. The project was based on the PMLA journal section called “Little Known Documents,” in which scholars curate archival material on unpublished documents.

“Initially, I was surprised by how difficult archival work can be,” Kotin said. “What does it mean to look at a letter, or even to know where to look? There are just so many options in Firestone because it’s such a rich collection that the students had a hard time knowing where to look and how to understand the item they are trying to look at.”

Examining archival material during class was made more manageable through a collaborative effort. In one session, students deciphered letters written in the early 1900s, combing through correspondence from William Braithwaite to Henry Van Dyke near the end of World War I.

But in their personal projects, the archival work proved more challenging. One of his students, Grace Monk, used her interests in Latin American and Mediterranean literature as a starting point.

“I found a very cool literary magazine published in Greece by a British journalist in 1946,” Monk said. “There were about 10 copies in the world. There are original stories by people like Lawrence Durrell and others that no one has looked at.”

Through the process of searching for the magazine, Monk pulled boxes of material she could envision being used for her future research.

“I took this class just because I thought it was interesting,” said Monk, who is a first year graduate student studying comparative literature. “I wanted a chance to examine canonical texts and I also was really drawn to this component of working with the archives. It’s not something many graduate classes do, though I think it’s something that a lot of people are expected to do as part of their dissertation but don’t really have an introduction to before that.”

Kotin’s class presented a dichotomy between the sheer volume of commentary about Joyce’s work and the still untapped potential of archival reserves.

“On one hand we’re diving into the middle of a million conversations about these canonical, important, influential books,” Kotin said. “On the other hand, we want to use the archives at Firestone to think about the potential of artifacts and texts and unpublished material that hasn’t been looked at. How can those two sides of the story speak to one another?” 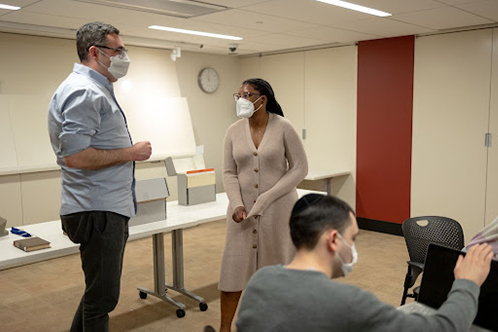 In some cases, the archives provide a means of stumbling upon correspondences you didn’t plan on finding. Chloe Wheeler is a first year Ph.D. student in comparative literature who took the class knowing it’d be a chance to revisit “Ulysses.” Her interests range from lyric poetry to Colonial Latin American to Medieval Spanish literature, in addition to the classical reception in modernism.

“But the most exciting moment in the archive for this class was when I was parsing through letters from the Bernardo Canal Feijóo collection, looking for correspondence from 1922,” Wheeler said.

“At the end of the day, the final folder I came upon was full of a rich set of letters from an Uruguayan poet, Carlos Sabat Ercasty, who was writing to Canal Feijóo in 1922 about his life and his poetic work,” Wheeler added. “It appears that in 1940 Canal Feijóo stopped responding to Sabat Ercasty and the Uruguayan poet sadly wrote to his friend: Why the silence? The emotion pierced through the years and the 20th century “ghosting” felt real to me as I held Sabat Ercasty’s letter in my hands. After so many not-interesting letters from not-relevant years that week in the archive, I felt like I’d hit a gold mine.”

In another instance, Garcon brought to class was the diary of James Gould Cozzens — not a weatherman or scientist but a Pulitzer prize-winning novelist — who took detailed daily notes about the weather in 1922, when he was only 19 years old.

“What would it look like to document someone's concerns about climate fluctuation in the 1920s against our concerns right now?” Garcon asked. “That's where I think scholarship is always growing and really exciting; when you have people looking at materials from different perspectives and therefore asking different questions.”