Inside the Milberg Gallery: The Garden in Eden and the Origin of Knowledge

The following is the second in a series of inside looks at the current exhibition in Princeton University Library’s Ellen and Leonard Milberg Gallery at Firestone Library, “Through a Glass Darkly: Alchemy and the Ripley Scrolls 1400-1700.”

The Garden in Eden and the Origin of Knowledge

Alchemical texts often altered and repurposed biblical imagery in ways that may appear rather strange to modern readers. The Ripley Scrolls, for instance, transform the serpent in the Garden of Eden into a hybrid human-dragon creature and replace the traditional apple with grapes. Even more unfamiliar is the repurposing of this imagery toward a non-religious end. Adam and Eve become gold and silver, the serpent becomes the philosophical mercury, and the entire narrative of the Fall becomes an allegory for the chemical process that produces the philosophers’ stone. Unlike modern readers though, early modern readers were quite familiar with creative and wide-ranging uses of biblical imagery.

The fifteenth-century Chronique universelle d’Orléans was a genealogy of human history that stretched from the creation of Adam and Eve to the middle of the fifteenth century (although this particular scroll offers only a partial account that concludes with Christ). 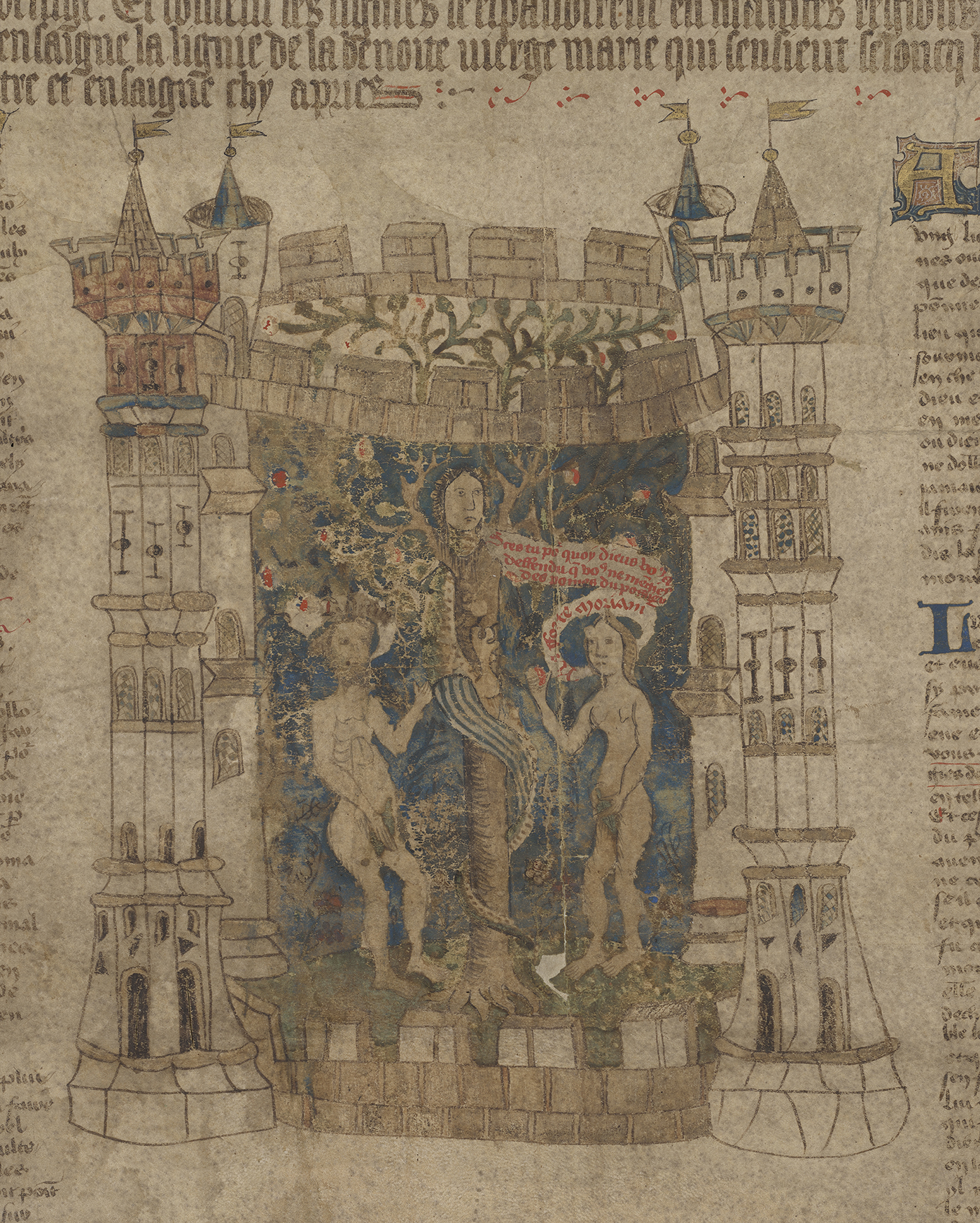 The scroll design includes a striking illustration of Adam and Eve in the Garden of Eden. Adam and Eve flank the Tree of the Knowledge of Good and Evil, a serpent with a human face coils around the tree between them, and Eve reaches for the forbidden fruit. The similarities with the Ripley Scroll are apparent. A nearly identical image appears in the first edition of the King James Bible (1611). The first King James Bible included a chronology produced by the cartographer John Speed (1551–1629) and his associate Hugh Broughton (1549–1612), a controversial scholar who wrote extensively on biblical genealogies and chronology. The pair began their King James chronology with an illustration of Adam and Eve flanking the forbidden tree in the Garden of Eden, the serpent wrapped around the tree, and Eve extending her hand to accept the fruit.

Similar imagery and allusions were ubiquitous not only in the field of chronology but in many other fields as well. Many early modern Christians believed that Adam possessed complete and perfect knowledge of the world before the fall. The rediscovery of this prelapsarian Adamic knowledge was thus the end of natural philosophy, astronomy, geography, geology, natural history, and other forms of inquiry into the natural world. Allusions to (and illustrations of) Adam’s knowledge and the Garden of Eden thus abounded in early modern scientific texts.

Given this context, the biblical images in the Ripley Scrolls may have appeared more prosaic to early modern readers than they do today. 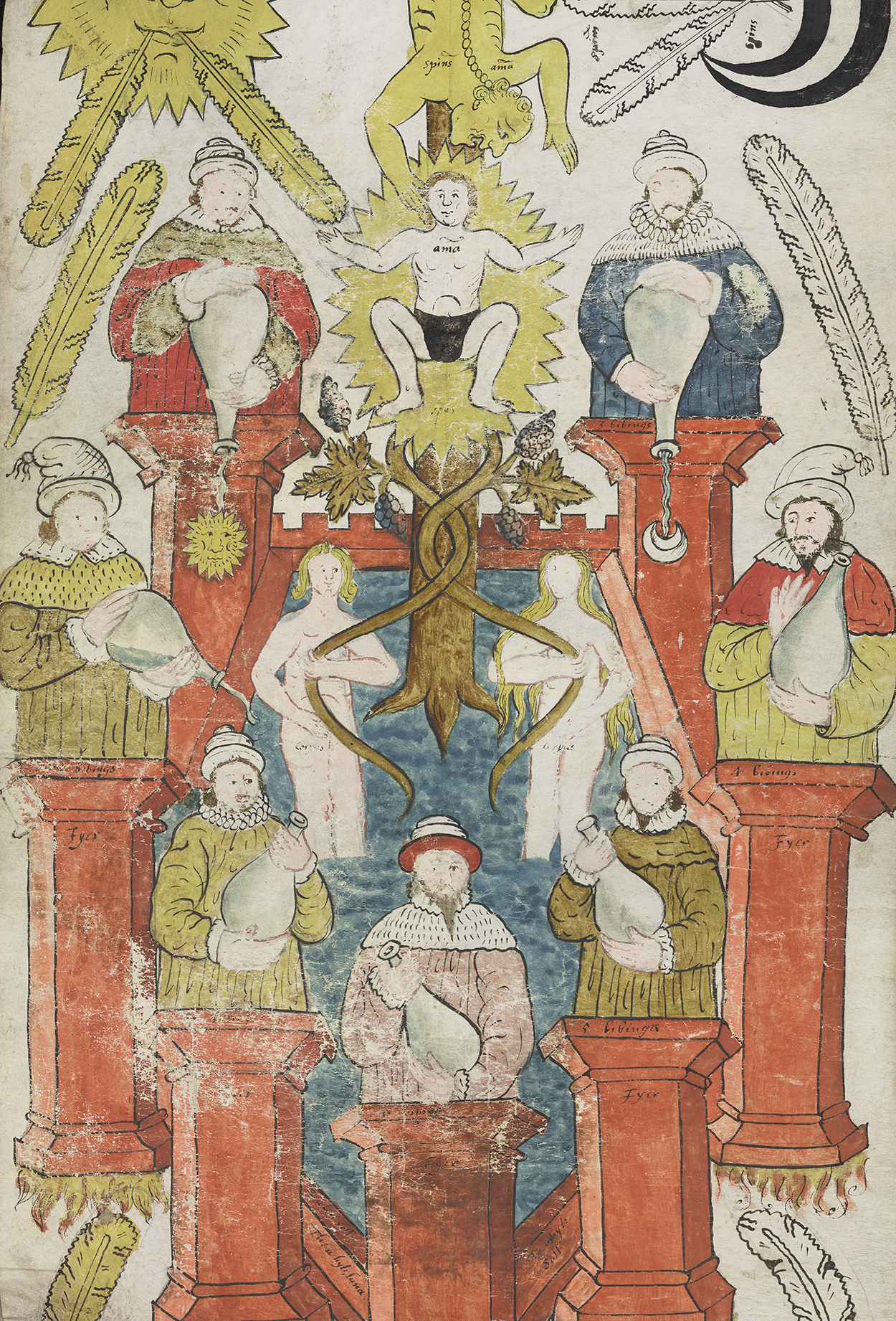 Admittedly, the modifications to such biblical imagery were typically more limited than the substantial changes in the Ripley Scrolls. Nevertheless, for early modern readers already accustomed to seeing a human face on the serpent and encountering the Garden of Eden in a wide variety of non-religious texts, the illustrations of the Ripley Scrolls would have appeared less unusual than they do today.

Through a Glass Darkly: The Visual Culture of Alchemy conference will be held May 26-28, 2022 at Princeton University. This conference will explore the visual language of alchemy within the broader cultural and intellectual context of pre-modern Europe. Visit ripleyscrolls.princeton.edu for more information.

Written by: Wesley Viner. Wesley Viner is a doctoral candidate in the History of Science Program at Princeton University, where he is completing a dissertation on biblical interpretation and natural philosophy in the early modern period.